The number of strikes and worker protests in China escalated dramatically towards the end of 2015 as the economy continued to stutter, with manufacturing, construction and mining all seeing a massive upsurge in disputes.

China Labour Bulletin’s Strike Map recorded 2,774 incidents for the year as a whole, double the 1,379 incidents for 2014. This increase can be accounted for partly by better data tracking but the upward trend towards the end of the year is still very obvious. See table below. 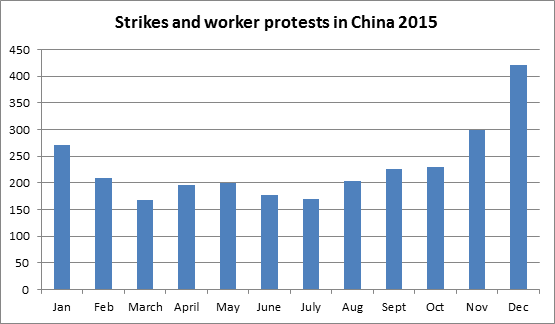 The increase in strikes and protests began around the time of the 11 August yuan devaluation and subsequent stock market crash and continued to build during the final quarter of the year as the economy showed little sign of improvement.

However, the economic downturn only partially explains the increase in labour disputes. The fundamental cause has been systematic failure of employers to respect the basic rights of employees, such as being paid on time and receiving their legally mandated benefits, and the failure of local government officials to enforce labour law.

More than two thirds of all the disputes recorded in 2015, for example, were related to the non-payment of wages. Wage arrears have been endemic in the construction industry for decades but are now increasingly evident in manufacturing, mining and services as employers simply refuse to pay workers or close their businesses down and disappear.

Only 168 disputes last year were specifically related to demands for higher wages, and many of these incidents were sparked by a sudden pay cut. In 2012, when the economy was healthier, by contrast, demands for wage increases accounted for about 30 percent of all labour disputes, albeit from a much smaller data set.

The construction industry accounted for 36 percent of all incidents in 2015 with manufacturing at 32 percent. The transport industry saw five disputes on average every week, mostly related to unfair competition from unlicensed taxis, but its overall proportion fell to around nine percent. See chart below. 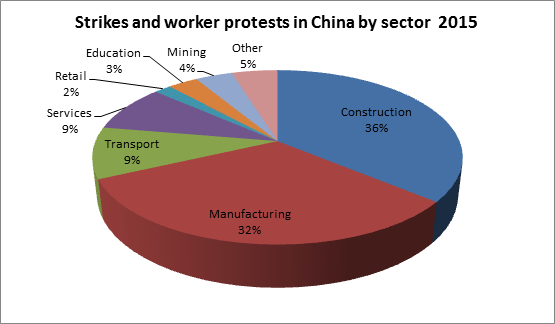 Just about every region in China saw labour unrest last year but in the manufacturing sector strikes and protests were very much centred on what used to be known as the “factory to the world” in Guangdong. Of the 886 incidents recorded in the manufacturing sector last year, 267 were in Guangdong, 181 more than the next highest total of 86 in Jiangsu.

On 4 December, Guangdong police detained seven prominent labour activists who had been instrumental in resolving numerous disputes. The crackdown however has done little to stem the tide of labour unrest in the province, with another 56 incidents recorded in the province in December alone.

Workers will either silently swallow insult and humiliation or alternatively they will do much more extreme things such as blocking roads in order to get back their money since there will be no one to tell them what they should and should not do and how to fight for their rights legally.

Worker protests accounted for 38 percent of all mass protests by Chinese citizens last year, according to statistics published on the well-respected Wickedonna blog.