The CLB Strike Map has moved to an in-house sampling system for its data collection. In the past the Strike Map relied on variety of outside resources for primary data; these sources have changed through the map’s six year history. In order to maintain a sustainable flow of information in the absence of official statistics, CLB staff now perform in-house data harvesting on worker collective actions on Chinese news and social media platforms.

Beginning in 2017, instead of 24-7 monitoring, CLB now performs data sampling twice a week, and will continue to publish each quarter an analysis of the information in order to identify the trends in worker actions. This new method will likely lead to a smaller total number of incidents recorded compared to recent years.

In fact, Strike Map figures, in the absence of government statistics, have always been a sample of the broad spectrum and an indicator of trends in worker actions and were never meant to be interpreted as a tally of the total number of strikes and protests occurring in China.

For example, in Zhejiang province, the Ministry of Human Resources reported 1,700 “sudden incidents”, a catch all phrase for strikes, demonstrations and protests, from January to October 2016; over the same period, the CLB's Strike Map recorded just 82 worker actions.

Precisely because the Chinese government has not published figures on worker strikes and protest since 2010, and authorities have targeted citizen journalists who make this kind of information available to the public, CLB's Strike Map will continue in its efforts to mitigate for this insufficiency in information transparency.

For more details on our methodology please read the introduction to the strike map on our website.

Last month, in the week before Chinese New Year, the strike map recorded between 30 - 40 incident per day as the annual surge in migrant worker actions reached its climax. Two examples of the overwhelming number of worker actions are detailed below.

Threat to jump from government building in Dalian 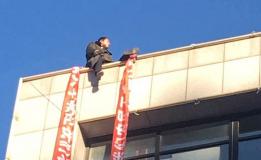 More than 900 workers spent two years on a construction project on the Liaoning University of Science and Engineering campus between 2014-15. When their boss failed to pay, workers went to multiple government departments seeking help.

In 2016 workers held street demonstrations and occupied a building at their work site demanding payment. The local labour inspectorate then gave workers 20% of the sum they were owed, and promised to help them get the rest within a year.

Last month on 24 January, workers demonstrated at front of the labour inspectorate offices who had failed to obtain the final 80%. One of their colleagues climbed to the top of the building and threatened to jump. 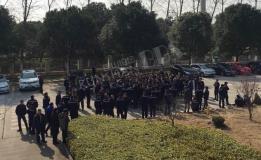 Workers at Gestamp auto parts factory in Kunshan went on strike with the holiday fast approaching.

Flyers were posted in the factory with a list of grievances, protesting lower New Year bonuses than other Gestamp factories throughout China in Chongqing, Dongguan and Shenyang. Workers complained of worsening conditions and an increasingly careless and hostile management in recent years. They opposed the elimination of family leave days, as well as new limits on overtime pay.

Kunshan Gestamp workers also went on strike late last year when upper management went on an expensive tour of Japan and announced an end to workers’ high-temperature subsidies upon their return.