Stirrings of democracy at a Shenzhen factory

Workers at the Ohms electronics factory in Shenzhen got their first taste of democracy on 27 May when they voted for their own trade union chairman. The workers had demanded their own representative trade union during a strike at the factory two months earlier and their success left them exuberant but also uncertain about what the future might hold. 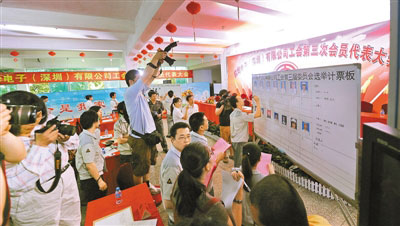 It is rare for workers to demand the establishment of a democratic trade union during strike action (most demands are for pay increases or compensation) but a young worker at Ohms told CLB that their inspiration came from their increasing awareness of democracy, and the need to protect their rights through their own organizations.

“The education we receive now is quite different from the old generations,” she said. “Internet, television and other media channels all contribute to the formation of our democratic ideas.”

Although the role of the Shenzhen Trade Union Federation in guiding this direct election was well publicized in the mainstream media, CLB’s labour relations experts pointed out it in our most recent Chinese-language newsletter that it was the bottom-up pressure from the workers, combined with the Shenzhen union’s top-down support, that guaranteed success:

The workers’ collective demands both forced the trade union to intervene and the factory management to make concessions. It is an encouraging sign that the municipal trade union decided to restore workers’ rights to nominate and vote for their trade union committee and chairman.

The right of workers to democratically elect their trade union committee is enshrined in China’s Trade Union Law but is rarely implemented.

Zhao Shaobo, the new union chairman at Ohms, confessed, after winning the majority of workers’ votes, that he didn’t have much experience in trade union affairs and that his position in the factory was not high. Yet, he told the Southern Metropolis Daily that he was confident in bargaining with management as the new trade union committee was elected by workers. “Unity is strength.”

For most of Ohms’s 800 workers however, uncertainties remain. Three days after the election, one employee said on her Weibo that the workers were a bit disoriented and did not have a clear plan regarding what to do next. Moreover, she said, the new democratically elected trade union committee members already felt pressure at work.

Wang Tongxin, vice president of Shenzhen Trade Union Federation, had encouraging words for the workers however saying they should learn about democracy firsthand and should not be afraid of making mistakes. “You must give workers time to learn democracy, because democracy is a process.” Wang noted further that the Shenzhen union will work for direct elections in 163 companies in the city scheduled for a committee reshuffle this year.

At the provincial level too, the official attitude towards trade union elections cannot be clearer. In mid-April, Guangdong Party Secretary Wang Yang hailed the example of Shenzhen Ricoh, a Japanese owned copy machine maker that has held democratic elections for its trade union committee since 2007.

The direct election of trade union officials is not new in China. As early as 1984, Lishu, in the northeastern province of Jilin, held democratic elections for factory trade unions in the county. Various pilot projects were conducted across China afterwards, but it is difficult to gauge the results of these experiments because of the lack of follow-up reports in the media.

Professor Jacques deLisle from the University of Pennsylvania Law School told CLB that the preferred method for Chinese officials in handling labour conflicts was to increase the protection for workers without really creating a system where such protections are legally enforceable against employers.

However, as CLB’s experts pointed out, democratically elected trade unions that represent workers’ rights can definitely play a role in easing labour conflict by initiating a rational and peaceful collective bargaining process rather than simply allowing workers to stage wild-cat strikes.

It will be instructive to see whether or not the newly elected trade union chairman and committee at Ohms can follow this model and work towards establishing a collective bargaining system that can resolve labour conflicts and protect workers’ rights.