Stepping into the breach: labour groups start to take on the role of the trade union in China

China’s sole legally-mandated trade union, the All-China Federation of Trade Unions (ACFTU), has consistently failed to protect and promote the interests of China’s workers. This failure has been particularly apparent over the last two years; a period of enhanced labour activism in which the need for a properly functioning trade union has become ever more urgent.

The failure of the ACFTU to act meant that a growing number of civil society labour groups in China, primarily based in Guangdong, had to step into the breach, helping to organize workers and resolve their disputes with management through collective bargaining.

In China Labour Bulletin’s new Chinese-language report on the Workers’ Movement in China, published today, we focus in particular on the growing importance of China’s labour groups during this period of rapid social, economic and political change.

The report (中国工人运动观察报告 2013—2014年) notes how ACFTU officials too often remained aloof and distant in the face of worker activism, acting more like government officials rather than real trade unionists. This stance only alienated them further from the workers they are supposed to represent.

Most of the activists working in China’s labour groups, on the other hand, used to be workers themselves; they understand workers and remain close to them. As such they have been able to successfully guide workers through collective action and resolve labour conflicts with management. Over the last two years, the hands-on experience of these labour groups has grown immeasurably and they have now become a key part of the workers’ movement in China. 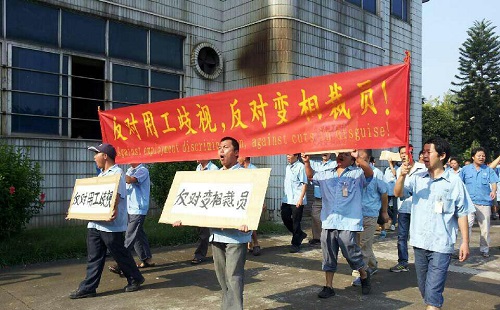 Workers at the Liansheng Moulding Factory in Guangzhou stage a protest in September 2013 designed to bring their boss to the negotiating table.

The first part of the report analyses 1,793 specific incidents of workers’ collective action across the whole of China in 2013 and 2014, and discusses why the number of incidents has increased both in number and scale, how workers’ demands have developed, and how their actions have matured. It also looks at how some local collective actions have evolved into industry-wide or regional actions.

The report stresses the extent to which the confidence and organizational ability of workers has grown to the point where they are not only aware of their rights but understand that they are part of the working class; a class that increasingly has the strength and ability to forge its own destiny.

In addition, the report looks at the response of government officials to the workers’ movement in China and shows how many officials have been forced to look beyond the simple “maintenance of stability” and accept that collective bargaining can be a more effective means of improving labour relations.

The 62-page report is the sixth in a series of reports on the workers’ movement dating back to 2000, all of which can be found on the CLB website. It develops and expands upon many of the themes discussed in our English-language report, Searching for the Union: The Workers’ Movement in China 2011-13, published last year.