A small group of factory workers staged a protest outside the gates of Jasic Technology in Shenzhen early this morning, 24 July, demanding reinstatement after being dismissed and beaten by thugs for trying to set up a union.

“We want to be reinstated! We want to unionise!” the workers chanted as factory security guards prevented them from entering the plant. 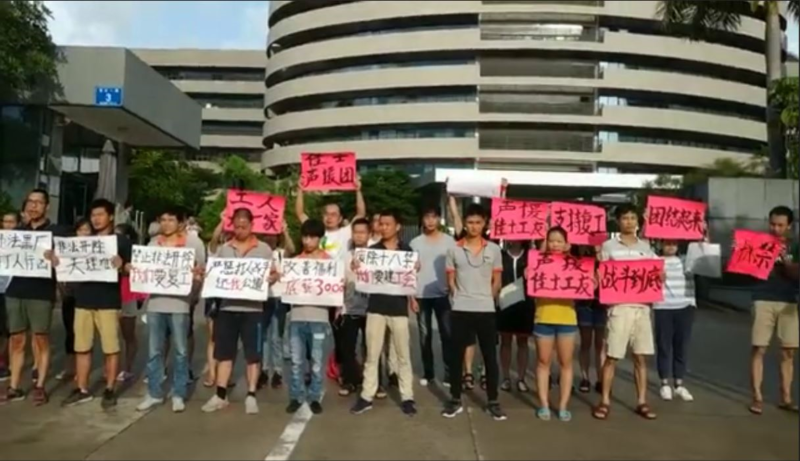 This morning’s protest was the latest action in the workers’ campaign for unionisation which began in May after working conditions at the factory in Shenzhen’s Pingshan district had reportedly deteriorated to the point where workers were forced to act just to ensure a living wage.

Workers said the company was treating them “like slaves.” Management had robbed them of hundreds of yuan each month by arbitrarily changing their schedules and under-paid their social insurance and housing fund contributions among other abuses.

The workers reportedly took their grievances to the local Pingshan federation of trade unions office where staff suggested that they formally unionise as a means of resolving their issues with management. Jasic management however had already set up their own worker representatives committee which excluded the candidates the worker activists had proposed.

According to the blog Rights Defence (维权网), management then accused worker activists of illicitly collecting signatures for their unionising plan under the guise of a fire prevention training application form. Worker organisers Mi Jiuping and Liu Penghua were then roughed up by thugs and formally dismissed. When they tried to enter the plant on 20 July, they were stopped at the gates by security guards and after an altercation erupted, police intervened and a few workers were detained. Colleagues gathered in front of the police station and held a marathon protest over the weekend. All workers were subsequently released.

In a now deleted open letter on social media, worker organiser Mi Jiuping thanked their supporters and emphasised that “the right to unionise is protected by Chinese law and workers are only exercising their legally entitled right.”

“Is unionising illegal, evil or frightening?” questioned Mi, who then stressed that “nobody can stop us from building our own union, nobody can destroy our solidarity.”

Liu Penghua echoed Mi’s show of determination in his own WeChat public account. Liu demanded that Jasic assume responsibility for the beatings that occurred inside the factory as well as the arbitrary reassignment of worker activists’ job duties.

Meanwhile, the Pingshan district union announced on Monday 23 July that “a big step had been taken in efforts to establish an enterprise union at Jasic Technology” as the local union and company representatives were officially entering the preparatory stage “after two months of working together.”

These conflicting accounts of the unionisation process at Jasic make it difficult to verify exactly what is going at the plant. One thing is clear however; workers should not be dismissed for trying to unionise, rather they should be included in the process and allowed to stand in democratic union elections.

Jasic Technology, established in 2005, is listed in the Shenzhen Stock Exchange. According to the company website “Jasic provides its products and service throughout the country and world, involving various industries such as shipbuilding, boiler, petroleum, chemical railway, construction, electricity, steel structure, metallurgy, and vehicles manufacturing.” The company has plants in Shenzhen, Chongqing and Chengdu. The Shenzhen plant alone employs around one thousand staff. Company representatives could not be reached for comment.