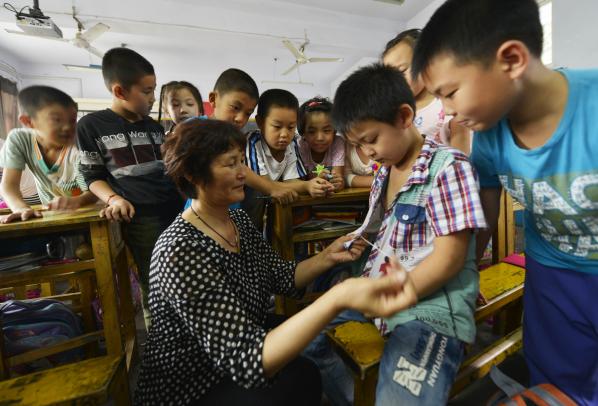 After five years of wage delays and non-payment of bonuses and pension contributions, the teachers of Dafang country in Guizhou finally had enough. They took their complaints public and petitioned the central government for help. In early September, the State Council intervened and ordered the local government to pay the teachers the 470 million yuan they were owed.

When the Dafang incident was reported in the Chinese media, it opened the floodgates to more teachers’ protests in remote rural areas of Liaoning, Anhui, Jiangxi and Guangdong who all suffered from the same problems of low pay, and wages and benefits in arrears. These teachers are just the tip of the iceberg.

In China Labour Bulletin’s 2016 research report, Over-worked and under-paid: The long-running battle of China’s teachers for decent work, we pointed out that teachers all over China, particularly those in rural areas, have struggled for decades to get the pay and welfare benefits they are entitled to under the 1993 Teachers Law, which states that teachers should have similar pay and benefits as civil servants of a comparable grade. Very little has changed in the last four years.

In 2018, CLB’s Strike Map recorded 60 collective protests by education workers, spread out across the whole country. One particular incident, a  mass protest in Lu’an, Anhui, made headlines after local police broke it up and detained several teachers. This news provoked widespread public outrage and led to another high-profile intervention, this time from Party mouthpiece the People’s Daily, which issued a blunt commentary questioning the competence of local government officials:

If the teachers’ claims of being owed more than one year’s performance bonuses is true, is this due to local economic development lagging behind, local finances finding it hard to cope with paying teachers, or have funds been appropriated for other uses?

The commentary on suspected misappropriation still holds true. In Dafang county last month, several local officials were subsequently suspended from duty pending an investigation into a highly suspicious credit cooperative scheme that local teachers were obliged to pay into.

In addition to misappropriating funds, teachers said, the local government had publicly reprimanded them when they first protested and sought help from the central government. Although they have now been paid, many teachers fear they are on a local government blacklist.

The failure to pay teachers in full and on time is all the more egregious in rural communities like Dafang where teachers pointed out that in addition to their regular work, they have to play a crucial role in looking after the children of migrant workers left behind in the countryside, ensuring they are kept safe and in good physical and mental health.

Meanwhile, the vast majority of local trade union officials, who should be supporting rural teachers in their quest for justice, have been out working on poverty alleviation projects so that local government officials can say they have met the target set by paramount leader Xi Jinping to eradicate absolute poverty by the end of 2020.