Several hundred railway workers from the Zhuzhou depot in Hunan staged a mass protest at the province’s main railway station in Changsha on 2 August over long-standing grievances at the railway company’s staff deployment system, the Daily Economic News (每日经济新闻) reported. See photo below. 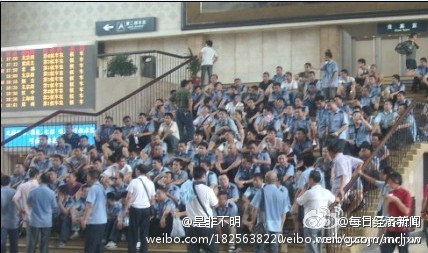 This is the latest in a series of strikes by transport workers in China this year but the first by railway workers. The authorities were quick to send mediators to the scene to resolve the dispute lest it cause disruption on the high-speed rail link between Changsha and Guangzhou. The drivers only dispersed at around 11.p.m. however after leaders promised to resolve the issues within one month.

The drivers’ main complaints related to the shift system and overtime payments. The Daily Economic News reported that on average a driver made ten to 13 round trips each month and earned between 4,000 and 5,000 yuan per month, but that there was no clearly stated overtime system. One driver from the Zhuzhou depot said workers regularly did excessive overtime and could not get enough sleep between shifts, leading to fatigue and putting the safe operation of trains at risk.