Garment factories in Myanmar are sacking worker activists under the cover of the Covid-19 pandemic, and workers say the country’s main labour arbitration council is letting them get away with it. Kyaw Ye Lynn in Yangon describes how trade unionists are fighting back.

Wearing personal protective equipment and keeping a safe distance from each other, a few dozen trade unionists gathered in downtown Yangon on 8 December in a rare protest. They took issue with the pro-business stance of the Central Arbitration Council, the key authority in Myanmar’s labour dispute resolution system.

Protesters from the Solidarity Trade Union of Myanmar (STUM) and the Federation of Garment Workers Myanmar (FGWM) held signs reading, “Members of Central Arbitration Council, step down immediately” and “Scrutinize the decisions made by the Council.” 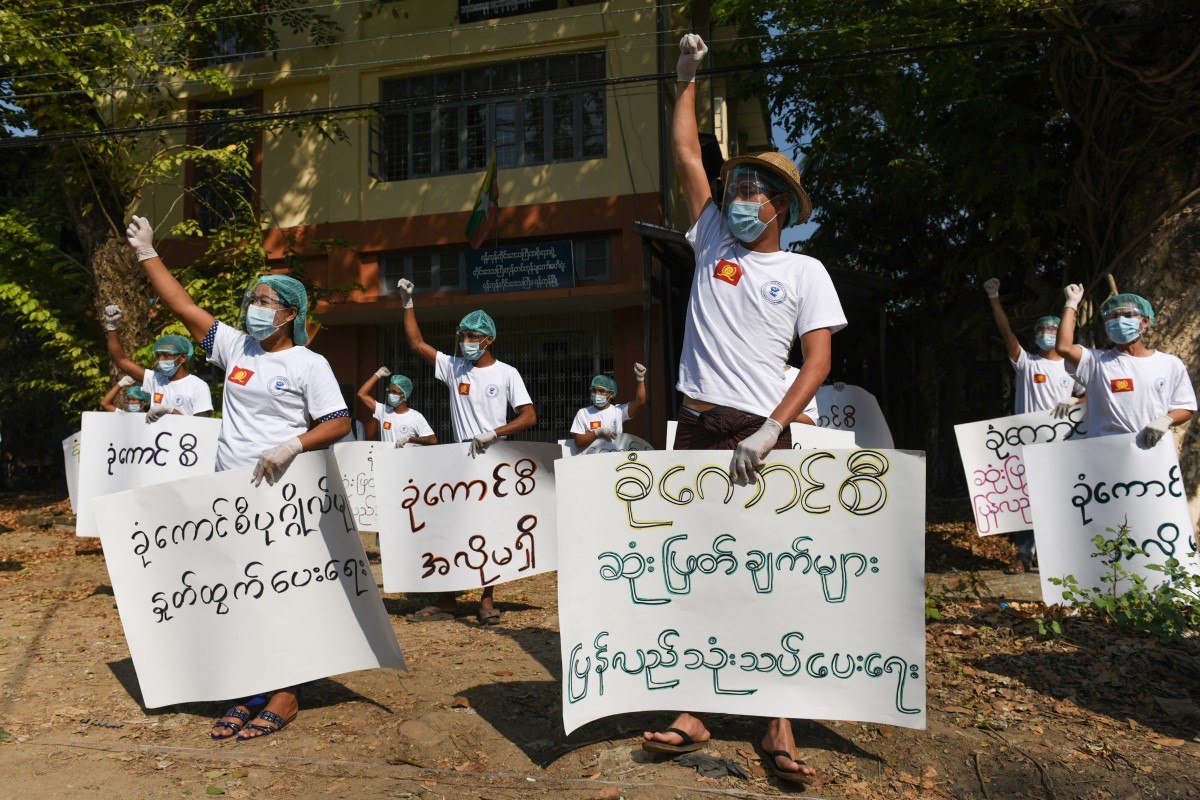 Trade unionists hold signs calling for members of the Central Arbitration Council to step down during a protest in downtown Yangon on 8 December. Photograph by Aung Naing Soe.

The workers highlighted the council's seeming acquiescence to attempts by business owners to fire workers, in particular worker activists and trade union members, during the Covid-19 pandemic. Myo Myo Aye, the founder and acting chair of STUM said:

“The Council’s decisions are obviously biased, especially during the pandemic. Workers lost over 95 percent of the collective dispute cases because of the Council’s unfair decisions. Its existence is not to serve truth and justice for workers, but just as a tool for unethical employers.”

Many of the disputes heard by the Council have been brought by workers in the garment industry, which has been hard hit by pandemic-related disruptions to the supply chain. The vice-chair of Myanmar Garment Manufacturers Association Kyaw Min claimed that at least 42 garment factories had closed down permanently this year, resulting in the loss of 40,000 jobs. He explained:

“The sector mainly relies on EU and U.S. markets, and we received just about 35 percent of the orders we had last year. We had at least four cases in which the owners ran away and the factories were auctioned to pay workers’ salaries and compensation.”

The difficulties faced by the industry have reportedly been used by many factory bosses as an excuse to target worker activists and trade unionists.

Kyaw Thu Zaw was one of 299 workers laid off in May of this year, soon after he was elected chair of the Rui Ning Myanmar garment factory trade union. The factory said the layoffs were necessary because of pandemic-related shortages of raw materials, but Kyaw believes they were a blatant act of union busting.

He and his colleagues had organized a 12-day strike in February, demanding that Rui Ning accede to the workers’ demands for an increase in skill and attendance bonuses.

“We were not a registered union at that time, and workers were afraid of joining us at first. But as the days passed, they realized the strike was for their benefit. So nearly 900 workers finally joined the strike,” he recalled.

The factory had a registered enterprise trade union, set up in 2015, but Kyaw said it was merely an adjunct of management and did not represent the workers. “After the strike, we tried to reform the factory union. The layoffs came just weeks after workers elected their new union leaders. Of the 299 laid-off workers, 259 were unionists. So, it was clearly an attempt to break the union,” he said.

The workers did not pursue arbitration.“We have zero trust in the process,” said Kyaw.

Instead, with the help of the Washington, D.C.-based Solidarity Center, the Amsterdam-based Clean Clothes Campaign (CCC) and Madrid-based Workers’ Commissions (CCOO), the dismissed unionists alerted the factory’s major international buyers, including Zara and Primark.

“At first, the brands did not respond to the rights abuses in the factories supplying them, but a media campaign helped maintain public pressure on the brands, while the remaining workers in the factory continued with a headband campaign demanding that the factory rehire us.”

After mounting public criticism, the factory eventually agreed to Kyaw’s reinstatement, and he returned to work on 4 August. However, the factory said it would only rehire the other laid-off workers when the economic situation returned to normal.

“If we went through the official process, for sure, all of our efforts would have been in vain,” Kyaw said

Moe Sandar Myint, the acting chair of FGWM agreed. Based on her own experience, the arbitration system is “flawed and ineffective.”

She was fired in 2016 by Running Tex, a Chinese-owned garment factory in Yangon, and she took her case to arbitration. “At every stage, the decisions were made in my favour. However, the factory management ignored the decision and appealed to the civil courts.”

After nearly seven months, the civil court penalised the factory for the unlawful termination of an employment contract with a fine for K10,000,000 (US $7,400). The fine for unlawful termination was raised tenfold last year, up from K1,000,000 (US $740), but Moe Sandar Myint says the penalty still encourages factories to dismiss workers unlawfully:

“Recently a local garment factory in Hlaing Thar Yar paid a fine to the government, denying two workers the right to reemployment. Factories are still happy to waste ten million Kyats to keep trade unionists out of their workplace.”

Hlaing Thar Yar township is where the majority of Yangon’s garment factories are located. The township, which now has a population of about one million is known as Yangon’s "wild west" because of its fast-paced, chaotic, and largely unregulated expansion over the last decade. The township’s dozen or so industrial zones contain more than 850 factories employing more than 300,000 workers. Many migrated from the countryside and live in cramped dormitories, paying K50,000 (US $37) a month for a small, shared room. 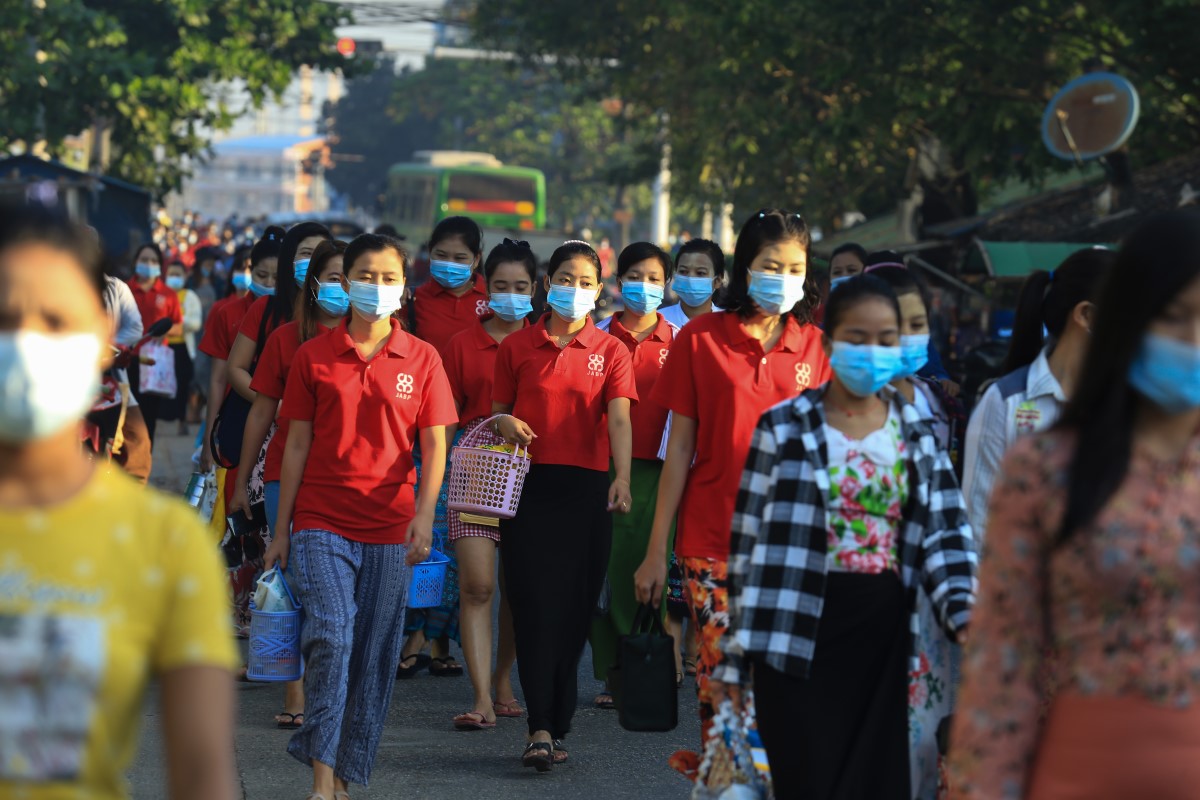 Garment workers on their way to work in Hlaing Thar Yar township, where the majority of Yangon’s garment factories are located. Photograph by Aung Naing Soe.

Given that the process takes so long and factory bosses in Hlaing Thar Yar can simply pay a fine at the end of it, Moe Sandar Myint said, it is little wonder that “workers have little or no trust in the arbitration mechanism.”

The Central Arbitration Council was formed in 2012, following the implementation of the Settlement of Labour Disputes Law. The 15-member Council has five representatives each from three stakeholder groups: employers, workers, and the government. They are elected to two-year terms.

According to the Settlement of Labour Disputes Law, collective labour dispute cases should make their way through the arbitration process starting with the workplace coordination committee, then heard before the township’s conciliation body, followed by the region’s arbitration body, and finally at the Central Arbitration Council’s tribunal. At the Council, the case is heard before a panel of three, with one representative from each stakeholder group on the Council.

The final decision of the Council is subject to judicial review, and the dissatisfied party can appeal all the way to the Supreme Court, a complicated and time-consuming process.

“It takes years, so no worker is willing to do it or able to go through it,” said CTUM’s Phyo Sandar Aung.

Workers and unionists believe the arbitration system is in need of reform, but they are also pursuing other avenues to protect their rights. According to the Industrial Workers Federation of Myanmar (IWFM), a member of IndustriALL Global Union, the key to resolving labour disputes at Myanmar’s garment factories is freedom of association.

“If factories accept that workers have the right to form a trade union that can represent their voices, most of the workplace issues will be solved,” said IWFM’s vice-chair Win Theingi Soe.

She noted that all of the international companies that had signed up to IndustriALL’s ACT initiative had agreed to specific freedom of association guidelines drawn up in 2019.

“Once the freedom of association guidelines become standardised, it will help in preventing most of the disputes that we see,” Win Theingi Soe said.

Indeed, if factory owners recognise the right of their workers to join a union and to engage with that union in good faith bargaining, workers would have greater agency over rights issues in their workplaces and would be less reliant on the Central Arbitration Council to remedy abuses after the fact.