The military regime in Myanmar has reportedly declared more than a dozen trade unions in the country illegal and is actively hunting labour activists who have been at the forefront of the civil disobedience movement (CDM) since the 1 February coup.

China Labour Bulletin, an independent voice for Chinese workers, stands in solidarity with Myanmar’s trade unions and all workers seeking to restore democracy in the country. We join many other labour organizations, including the International Labour Organization, in calling for an immediate end to the harassment and persecution of labour activists in Myanmar. 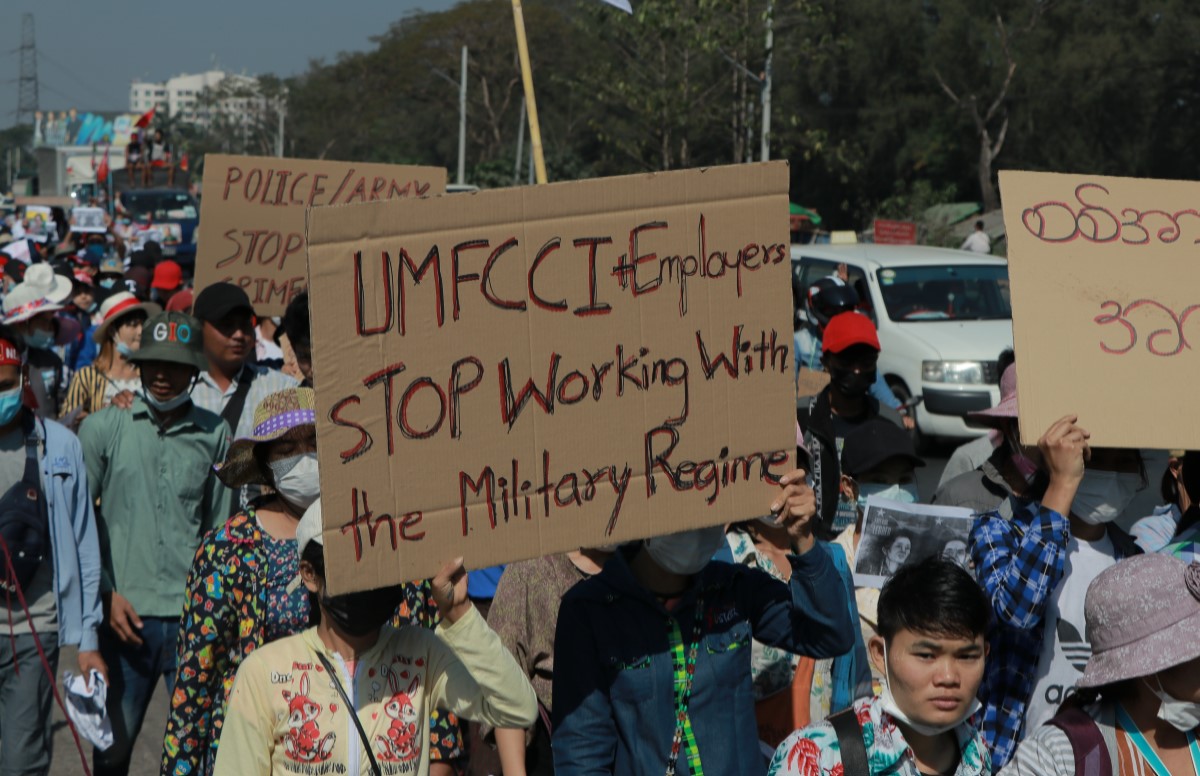 There have already been numerous calls for international brands and their suppliers to respect the right of workers in Myanmar to the freedoms of association, expression and peaceful assembly. On 19 February, global retail brands sourcing ready-made garments from Myanmar released a joint statement with IndustriALL condemning the military coup and affirming their commitment to democratic standards. Some factory owners in Yangon, however, want to restore production as soon as possible and will no longer allow their workers to continue protesting.

Last week, CLB talked to workers in Yangon who said that in the initial stages of the CDM, some factory managers did allow employees with a leave entitlement to take time off work and participate in the protests. Now, however, the rules governing leave have been tightened.

Workers who take three consecutive days off work will be dismissed, explained a garment worker and trade unionist at the Yangon Dishang Fashion Garment Factory. As a result, she said, “workers go to work for one day and then take two days’ leave.” However, she added, the pressure is building and some workers have dropped out of the movement.

“We can’t sleep at night but still have to go to work in the morning because we are afraid of losing our jobs. To be honest, it is impossible to relax, physically or mentally.”

Moreover, it is alleged that some garment factory managers are aiding the military and police in their search for labour activists. “During the 18 February protest we heard that the factory manager had received a phone call from a sergeant asking about the leader of the demonstration. The manager replied that he didn’t know, but the next day we heard that he had given our phone numbers to the police,” she said.

While some garment factory owners and managers are primarily concerned with restoring production, regardless of who is in power, the most pressing concern for workers is to overturn the coup and restore the democratically-elected government.

“Under the military regime, I doubt that we will be able to file our complaints against employers to government offices,” the worker interviewee said. She presciently added, “I am afraid that the trade union will not be able to operate effectively in the future because the union leaders will be under surveillance and controlled by the authorities.”

The control of the internet by the military has also made it very difficult for workers to do anything. “It is like going back to the dark ages,” she said.

As the civil disobedience movement enters its second month and the military repression intensifies, it is essential that all international workers’ organizations continue to demonstrate unwavering solidarity and support for the Myanmar workers’ struggle. CLB also urges international brands in the garment sector to put those factories that are aiding the military in its suppression of labour activists on a watch list, and to find ways to put real pressure on the military regime to restore democracy.

CLB chose not to identify the workers interviewed for this article.