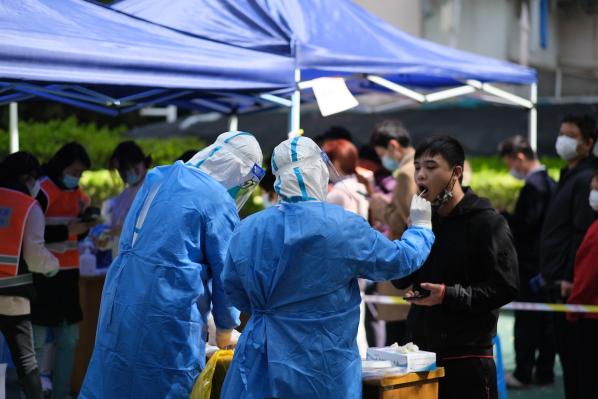 Based on the data China Labour Bulletin collected in July 2022 on worker strikes and protests, labour disputes, and workplace accidents, we have found a trend of medical workers seeking wages in arrears, and these cases are concentrated in China’s north-eastern provinces.

According to CLB’s mapping data, service sector worker collective actions and online posts about labour disputes rose last month, and we focus our attention on those in the medical sector in China’s northeast. In Dandong, Liaoning province, a district hospital owed workers five months’ wages and over 20 years of pension payments. Over 100 workers protested on 19 July, and the district health bureau responded that the pandemic has decreased the hospital’s efficiency.

Also in Liaoning province, in Shenyang city, some medical workers assigned to administer PCR tests went on strike and refused to take samples. On 25 July, the workers posted a handwritten note on the testing station to indicate they were striking. They also posted online saying they were owed wages and therefore suspected the outsourced company was improperly using funds from the health department.

In Changchun, Jilin province, doctors posted online on 23 July about their labour dispute with a third-party company, saying they were owed wages and neither the company nor the hospital where they worked would take responsibility.

In none of these actions did China’s official trade union step in, even when local authorities were willing to negotiate with workers in Dandong but used bad faith arguments to support the delayed wages. Rather, local unions were busy promoting a political sloganeering campaign about being “at war” with the pandemic and investing over 1 million yuan on photo ops, sending cake coupons to medical workers, and sending vegetable baskets to “model workers.” Rather than random provision of food, what workers truly need is an advocate for their wages to be paid according to the law and for their health and safety to be protected on the job. 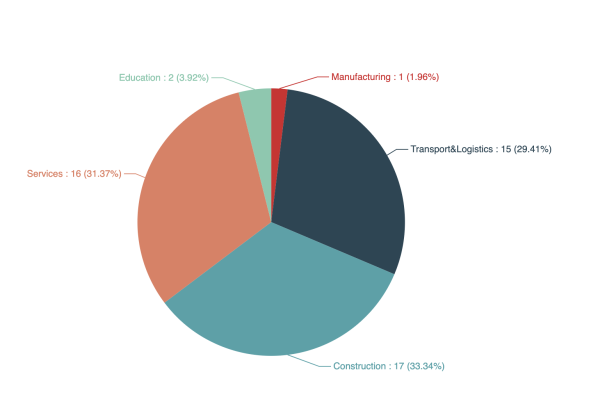 In July 2022, a total of 51 worker actions were recorded in our Strike Map, a decrease of about one-third from the previous month. However, the distribution among the industries of construction, services, and transport tracked with that of June 2022. Workers in the education and manufacturing industries took fewer actions this month.

Over 80 percent of collective actions were overt wages, and most incidents were small in scale. Less than one-quarter of all incidents involved over 100 people. This is consistent with past trends.

As for responses to these collective actions, among the cases in which a response is known, about 20 percent of the cases resulted in government intervention and negotiation. Police response stood at one percent, consistent with prior figures. 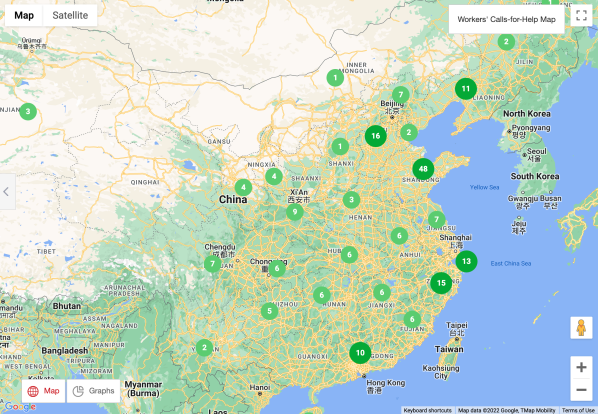 In July 2022, the number of cases about labour disputes collected in our Workers’ Calls-for-Help Map increased from last month by about 45 percent, to 208 incidents. Shandong province took a remarkable lead with 48 incidents, followed by Zhejiang with 15 recorded. Among the total, the construction and service industries accounted for the largest proportion of cases, with about 38 percent of the total each. Workers’ labour disputes are almost all related to wage arrears.

Over 60 percent of the incidents involved 2-50 people. More than half of the workers sought government mediation. Compared to last month (19 percent), more workers sought help online, with almost 36 percent wanting to gain online attention on their cases. 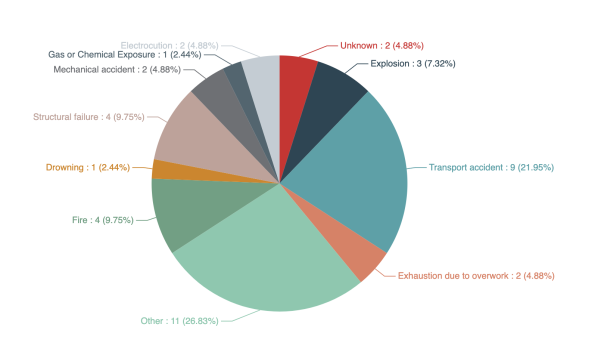 CLB collected 38 incidents in our Accident Map in July 2022, with the highest concentration (eight incidents) in Shanxi province. One quarter of the incidents collected were in the mining industry. One of those occurred on July 23 in Baiyin city, Gansu province. Ten workers were killed and seven were injured. This accident in Gansu province comes after a major February 2022 coal mine accident in Guizhou province that killed 14 people, prompting China’s State Council to investigate and seek accountability, including strengthening the State Council’s own measures such as unannounced site visits and inspections in the mining industry.

However, adequate safety measures at the frontlines are the most effective way to ensure accidents are prevented. China’s Work Safety Law, Mine Safety Law, Trade Union Law, and Regulations on Work Injury Insurance all clearly stipulate that China’s official trade union should be supervising work safety at job sites. The State Council should look to the All-China Federation of Trade Unions to ensure that mines are safer places to work, starting with organizing workers on the frontlines.