China Labour Bulletin Director Han Dongfang first went to Scandinavia nearly 20 years ago in 1995. On numerous subsequent visits over the last two decades, Han has come to see Scandinavian social democracy as a possible model or path for China to follow. In October 2014, Han visited Denmark, Norway and Sweden again, specifically to meet with trade unionists, labour activists and social democrats to discuss the workers movement in China and seek to understand in more detail what Chinese workers can learn from the history of the trade union movement and the development of social democracy in Scandinavia. 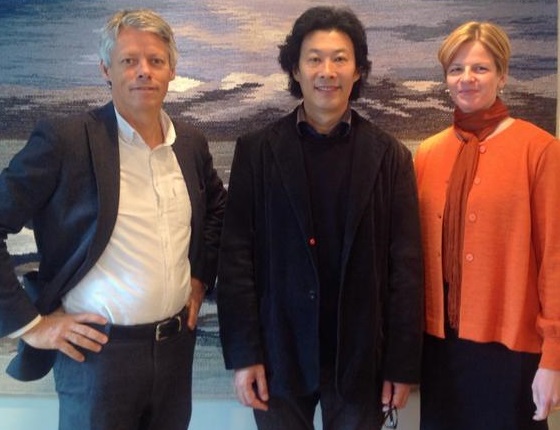 Han Dongfang with Jens Orback , Secretary General of the Olof Plame International Centre, and Loa Brynjulfsdottir, head of the International Department of the Swedish Trade Union Confederation. Photo from Twitter.

For Han, it is not about directly importing what is now a complex and highly evolved social democratic model into China but rather getting Chinese workers, particularly those workers leaders who are currently at the forefront of China’s burgeoning labour movement, to broaden their horizons, to start to think about issues a new way, and thus plant the seed of change.

Han wants Chinese workers to learn how Nordic countries have, over the last one hundred years or so, created a social democratic system that emphasizes social justice and equality and allows workers the space to develop as human beings and not simply focus on narrow material gain:

What I want to see in China, for example, is while we are thinking about bargaining for higher wages, we could also bargain for the employer to put more resources into employee training. So say the contract is for two years, the employer may not be happy to give you ten percent each year as a salary raise but they may settle at 5.5 percent.  If your only aim is salary, cash every month, you may go out on strike. But if you have more creative thinking, thinking about human value, then you can say instead of ten percent we will accept 5.5 percent but at the same time set aside the 4.5 percent difference for an employee training programme in which each worker gets say 50 hours free training. That skill will follow you all lifelong even if this factory closes down. The employer also gets the benefit of higher skilled, better trained workers. So you have better quality products and higher productivity and less staff turnover.

Han conceded however that this would not happen straight away. Right now, the most pressing issue for the vast majority of workers in China, he said, is still low pay and violations of basic labour rights. Moreover, workers’ demands, as expressed during strikes and protests, are nearly always based on short-term gain rather than long-term strategic objectives:

It is still very difficult to persuade workers to think in this new way. And strategically, in the short term, even medium term, we have to follow the workers’ demands but at the same time we have a chance to see different systems and ideas and we are obligated to bring these ideas to the workers. That is why I want to learn and why I want my colleagues to learn. It is why I want to bring workers’ leaders from China to these Nordic countries. This will be a lot of money, maybe €1,500 per person or €30,000 for a delegation of 20 people but you cannot put a price on the long term gains.

One of the key lessons, Han says he has learnt on his many trips to Scandinavia is that, contrary to the assertions of many neo-liberals and anti-communists, a social democratic system does not create a nation of lazy people.

Social democracy creates a fairer society that makes sure the gap between rich and poor does not get too big... This does not create lazy people, it creates happier people. You don’t have to work only for money, you can express your creativity and use your intelligence. You can make a lot of money as well but when you are old and sick you are also taken care of.

Han was warned however by friends in Scandinavia that before you can get to such a fairer and just society, you have to go through a period of conflict, as was the case in Scandinavia 100 years ago. Only when people understand that both sides loose out during violent conflict, they said, do you realise that sitting down and talking about your common interests is the better way forward. Han said:

If you look at China today, we are at a similar point. The labour conflict is getting harder and harder and more confrontational. At the same time, the government does not know how to respond. They got used to the planned economy and they think they have the ultimate authority to deal with this but China has a market economy now and the government no longer has this ultimate authority.

So now we have a choice. Which direction do we want to go? Do we want to go back to our history and get the pot boiling even more leading to a revolution? Or do we go towards a pure market system like the USA or do we want social democracy?

Han argued that the American model would not work in China because it is based on consumption, and the world simply cannot afford 1.3 billion people consuming that indiscriminately. The worst scenario however, Han warned, would be if China were to follow the path taken by Russia after the collapse of communism and descends into an anarchic, violent society where the rule of the jungle holds sway and ordinary people are left out in the cold. Alternatively, there could be such an extreme reaction in the wake of a revolution that everything the Communist Party once stood for, including the ideals of social justice and workers’ rights, get discarded and discredited along with the Party itself. This would threaten all the gains made so far by the workers’ movement in China.

This is why, Han says,  it is important to start talking about social democracy now, so that people can see there is a way forward that protects the rights and interests of ordinary workers and ensures that the already vast gap between the rich and the poor, the powerful and powerless, does not widen any further.