When Zhou Jianrong and her husband first arrived 12 years ago at the gates of what is now GCL Footwear in Shenzhen, the factory seemed to offer one of the best deals in town, especially for unskilled migrant workers such as themselves. The factory produced shoes for well-known foreign brands, paid competitive piece-rate wages and provided long service bonuses for senior staff.

Things began to unravel however a year or so ago when the factory changed ownership and announced plans to restructure. The workers, who had seen many other factory workers in Shenzhen lose their jobs or get cheated out compensation in similar situations, went out on strike in May 2014 in a bid to protect their interests. The boss responded by firing 109 of the strikers, including Zhou Jianrong.

When she heard the news, early on the morning of 17 July, Zhou climbed to the top of the four-storey factory building and jumped to her death. In the aftermath of the tragedy, CLB Director Han Dongfang talked to Zhou’s husband Li Fengrong and an official from the local trade union about the background to the dispute and the role of the union in it.

Li Fengrong explained that, from the outset, neither management nor the union seemed to understand or care about the workers’ concerns:

The boss did not want to bargain with us… Although officials from the Shenzhen Municipal Federation of Trade Unions were always here in the factory during the strike, they never helped us ask for collective bargaining or spoke up for us, they just told us to get back to work.

The workers’ protest started on 26 May and lasted for two month, as management consistently refused to answer the workers’ calls for collective bargaining. More than 500 employees took part in the strike but still management refused to talk. Instead, on 12 June, GCL started to retaliate by firing 39 strike leaders. The vice-chair of the enterprise union, Luo Xiangxun, was later taken away by the police and detained for a week for allegedly “disrupting public order.”

This brought any hope of progress to a rapid halt. Li said:

They asked us to elect our own representatives, but then they accused that representative of being a troublemaker and had him locked up. So no one is willing to speak up anymore.

GCL eventually fired a total of 109 workers for “participating in the strike.”  Zhou Jianrong, a 50-year-old mother of two, was among the last group of 20 strikers formally dismissed on 16 July. 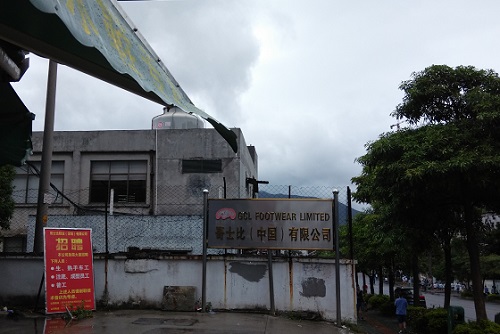 Now hiring: A recruitment poster outside GCL Footwear in Shenzhen

Despite the mass firings, an official from the local trade union federation in the Henggang sub-district of Shenzhen claimed management’s actions should not be seen as “retaliatory,” even though GCL management had made it clear to the remaining workers that their former colleagues were fired for their involvement in the strike:

How can you call it retaliation? When a worker violates the factory’s code of conduct and get fired for it, now can we really call that retaliation…We are not commenting on whether the move is reasonable or not, we just have to look at the laws.

Although the Henggang Union official defensively insisted that the trade union immediately got involved and “did everything it could” to help the workers negotiate with the GCL management, he could not pinpoint any successful outcomes. Moreover, he admitted that the union’s hands were tied when it came to preventing management from firing workers, and even suggested that the dismissal of the enterprise trade union’s vice chairman was justified:

This person was not fired for participating in the strike; he was fired for taking radical actions. The police just did what they should…Yes, they could have caught the wrong guy, you could go dig out the truth. There really is no point in asking me about it.

The officials just dropped by in the morning, hung around for a bit in the office and now they are nowhere to be seen…They just stood there, taking a look here and there, and kept telling us to calm down.

One reason why the local authorities seemed to be so on the side of business can perhaps be found in a recent arbitration hearing in which 25 of the dismissed GCL workers sought reinstatement. GCL’s lawyer argued in his submission that if the workers’ claim was successful it would make proposed structural reforms in other Shenzhen factories even more costly and difficult. Dismissing Zhou Jianrong’s suicide as an unfortunate footnote to Shenzhen’s economic development, the lawyer claimed: “If GCL loses, reform will be made practically impossible…throughout the whole of Shenzhen.

These interviews with Li Fengrong and the Henggang trade union official were first broadcast on Radio Free Asia's 劳工通讯 in three episodes in July and early August 2014.