Around 100 former construction workers and family members affected by the deadly lung disease pneumoconiosis have been encamped in Shenzhen for the last two weeks demanding long overdue compensation for the occupational illness contracted while working in city in the 1990s. 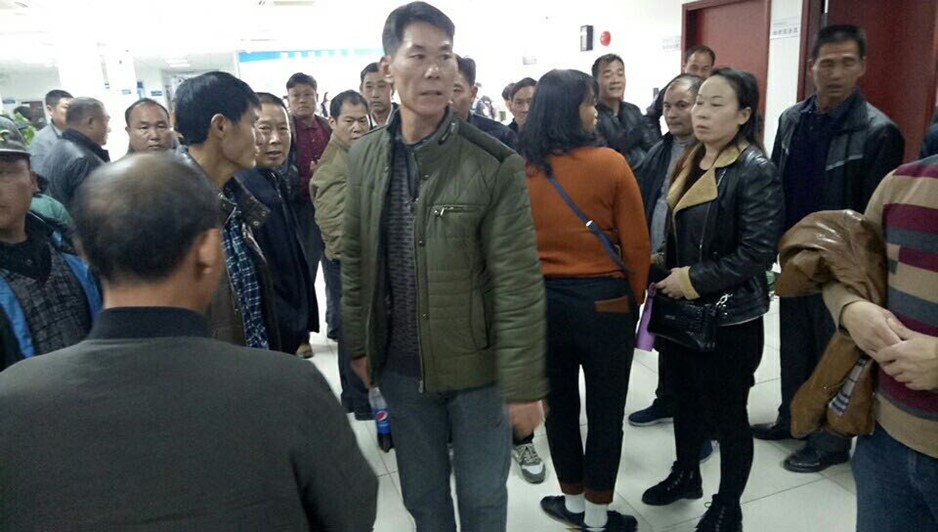 Many of the workers from villages around Leiyang, Hunan, had staged protests in Shenzhen before in 2009 and some had been awarded compensation of between 70,000 and 130,000 yuan each. Many others however were left out and the relatives of those who had died in the last decade are still struggling to get by.

Some of the surviving workers were finally given medical check-ups by their county government in October last year and it was then they discovered the severity of their current condition and made plans to return to Shenzhen.

The workers arrived at the Shenzhen government offices on January 8 and although officials agreed to meet them and discuss their problems, progress has been slow. “Every day they tell us they will solve our problems, but they are very slow,” said representative Wang Yaohua, who himself suffers from pneumoconiosis as result of working as a driller and blaster on skyscraper foundations and subway projects with little or no breathing equipment to protect him.

“When I took that job I was only in my 20s, and now I’m 50,” said Wang, adding that since the 2009 protests, more than 40 of his colleagues had died of pneumoconiosis, including key protest organizers like Xu Zhihui, who died in 2015.

It is important to note that following the 2009 protests, around 150 workers were reportedly blacklisted throughout Shenzhen. Some found it impossible to get work while others found that government offices would not accept their applications for social insurance even when they found work, forcing them to go back home to Leiyang.

On returning to Shenzhen this time, the workers and their families have been faced with yet more bureaucratic delays. The Shenzhen government insisted the workers provide documentary evidence of their claims, evidence the workers finally managed to collect and submit on 22 January.

The workers have seven demands, including compensation for the families of deceased workers, compensation and medical care for surviving workers with pneumoconiosis, and for the Shenzhen municipal government to pay for their accommodation in the city.

The petition office promised to put up the workers in complimentary accommodation and sent them to a local government shelter. But when the group arrived they found the shelter only had 30 beds for them. “We were offended,” said Wang, “now we have to live in small hotels or with family members in the city.”

Days of petitioning in Shenzhen has also taken a toll on the elderly members of the group. Wang noted that one worker had to be hospitalized for a few days but had since recovered enough to re-join the protest.

At the same time as the Leiyang protests, another group of workers with pneumoconiosis, coal miners from You county, also in Hunan, have been gathering outside their local government building since last week, and spreading news of their protest on social media. The workers are demanding that the government investigate their condition and take swift action to protect coal miners from pneumoconiosis, sometimes also known as black lung disease.

Networks of workers and their family members are growing on social media platforms, and workers from You county, Leiyang, and elsewhere are becoming increasingly aware that they are not alone and understand the importance of government oversight and prevention.

In their letter to the authorities, the Leiyang workers stated: “we hope the government will strengthen is oversight capacity and improve labour conditions to prevent this kind of situation from happening again.”