At least 78 people are confirmed dead and hundreds are injured or missing in one of the worst industrial accidents in China in recent years. A massive explosion on 21 March flattened the Tianjiayi Chemical Co. pesticide plant near Yancheng in Jiangsu and caused extensive damage to neighbouring factories and the surrounding residential area.

“There were two explosions,” one witness told Caixin, “the first explosion was smaller, the second one massive. The roads were full of people running for their lives, parked cars were all damaged by the explosions.” The fire engulfing tanks containing flammable chemicals “was three to four storeys high,” he added. 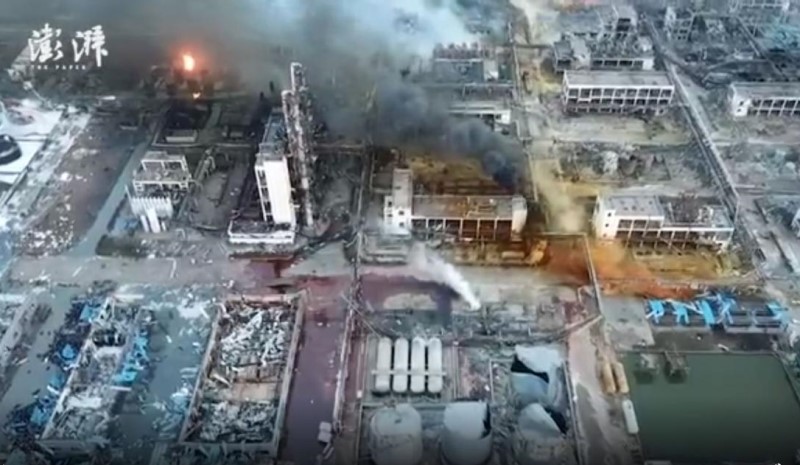 Aftermath of the explosion near Yancheng, Jiangsu, as seen in a drone video published by The Paper.

The focus of the rescue operation continues to be finding missing persons and treating the wounded but containing the damage to the air, water and soil caused by continued chemical leaks is becoming critically important. Residents fear it could take months, even a year to repair the damage.

In the immediate aftermath of the disaster, Zhang Qinyue, the general manager of Tianjiayi Chemical Co., who was injured in the accident, was placed in police custody along with several other company executives.

It was revealed by local media soon after the accident that the chemical plant had in fact been cited for 13 safety violations in a report issued by then State Administration of Work Safety just over a year ago on 7 February 2018. These violations included: a lack of qualified personnel, insufficient safety training, lack of clear safety protocols, poor quality control, poor signage, chemical tank leakages, neglect of fire hazards. etc. Ironically, the report stressed the importance of “learning lessons” from an earlier explosion at a chemical plant in Lianyungang, Jiangsu, that killed at least ten people on 9 December 2017.

The lax safety standards at the plant were well known to the local authorities but they reportedly only made superficial attempts to address the problems. A commentator for The Paper noted:

It is clear that local authorities were not blind to the risk posed by lax safety procedures in the chemical industry. Yet their repeated attempts to emphasize the importance of safety apparently still weren’t enough to prevent disaster. Lines were still crossed, things were still left to chance, and — whether one blames regulators or plant managers — safety hazards were not promptly addressed.

Local residents told reporters that the industrial park was a time bomb just waiting to go off, and noted that there had been several incidents in the past, including an explosion soon after the park opened in 2007 that had killed eight people. On that occasion, it was alleged that plant managers and local government officials had sought to cover up the blast by locking up reporters or seeking to buy them off.

Following the massive explosion at an illegal chemical storage facility in Tianjin on 12 August 2015 that killed 173 people, including 104 firefighters, the Chinese government vowed to better regulate chemical production and storage facilities and ensure they were no longer in close proximity to residential areas. But as this latest industrial accident illustrates, companies continue to hire unqualified personnel to perform dangerous jobs, workers continue to risk their lives in dangerous jobs with little or no training and minimal safety equipment, and nearby residents are still placed in danger.

China Labour Bulletin’s Work Accident Map recorded at least two similar fatal accidents in the last few months: on 25 December 2018 an explosion at a chemical plant in Turpan, Xinjiang, left three workers dead and 18 injured, while 22 people were killed and 22 injured in an explosion at a chemical plant in Zhangjiakou on 28 November. In the last four years, since March 2015, we have recorded a total 209 explosions, predominately at industrial and manufacturing facilities, across the whole of China.