Labour disputes on the rise, authorities call on union to take greater role

Central government departments have called for reform of the labour dispute resolution system after new statistics show that labour disputes continue to grow year after year.

There were 1.77 million disputes in 2016, according to a spokesperson from the Ministry of Human Resources and Social Security (MOHRSS). The statistics were released as part of a Q&A with the MOHRSS on plans for reform of China’s labour dispute arbitration and mediation mechanisms.

Labour disputes have risen steadily in recent years, reaching 10.4% in 2015 and 2.9% in 2016, according to the official statistics. CLB’s strike map records have also recorded over 5000 incidents or worker strikes and protests in 2015-16. 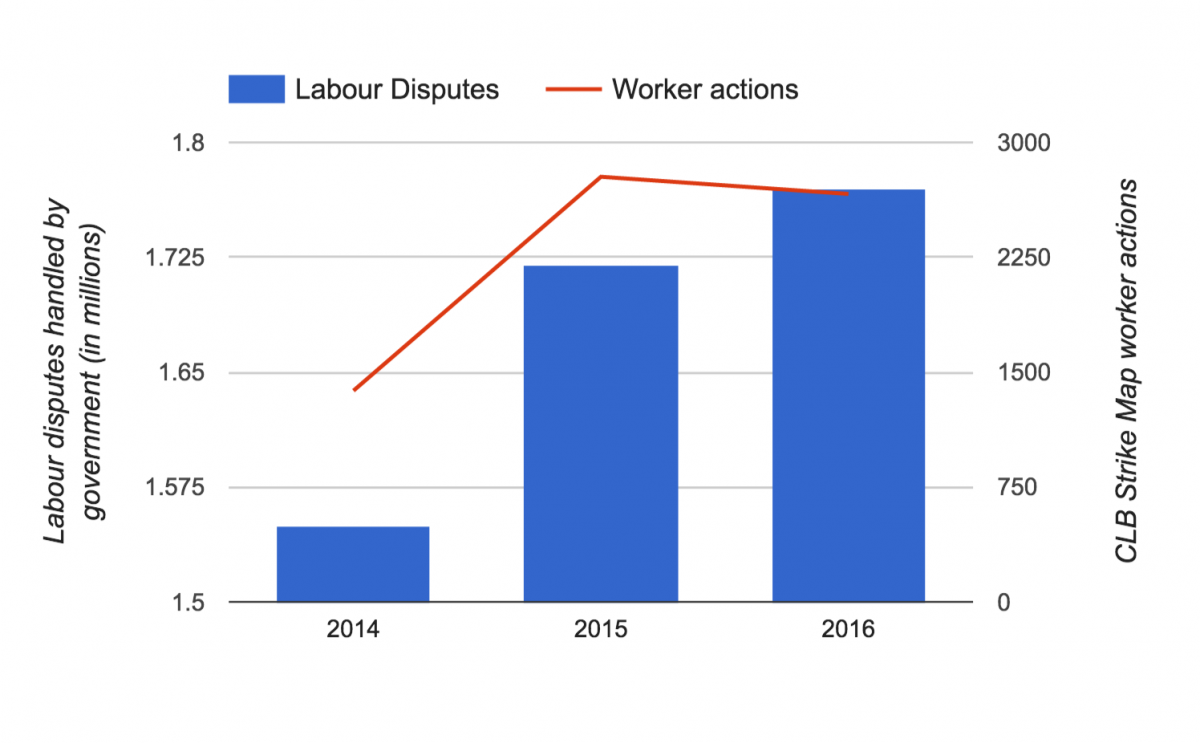 The document, entitled “Opinion on the Strengthening of Labour Dispute Arbitration and Improving the Diversified Resolution System”, was released late last month as a joint policy of the MOHRSS, All China Federation of Trade Unions (ACFTU), the Supreme People’s Court, and other departments.

China Labour Bulletin Director Han Dongfang acknowledged the government’s concern over rising tensions in China’s workplaces and their reform initiative, but stressed that the introduction of collective bargaining is the real solution to prevent disputes in the first place.

Han noted that while the MOHRSS blamed  the rise in disputes on the economic downturn, this was no excuse for failing to resolve labour conflicts. “When the economy is doing well, workers have the right to demand their fair share. But in times of a downturn, workers are in even greater need of effective ways of defending their rights.”

The Opinion called for a “clear improvement” of labour dispute resolution by 2020, and suggests that institutions like the ACFTU take a more active role. Han commented that without real trade union reform, labour disputes will only continue to rise.

According to the Opinion, when disputes occur, the ACFTU should respond more quickly and resolve cases “sprout level”. Han remarks that instead of responding to disputes after they occur, the union should rather resolve issues at their root before they sprout into disputes.

“What would actually be most effective? The union should be active at the workplace before workers are forced to take their disputes to court. Doing this requires the effective daily functioning of workplace unions to represent workers. This way, most labour disputes would be prevented in the first place,” Han said.

“China’s current dispute resolution system was always a more top-down and partial approach to labour problems,” emphasised Han. “This is only half what is needed. The other half, and the most important half, is a bottom-up system of self-governance through trade union representation through collective bargaining in the workplace.”