The Indian Federation of App-based Transport Workers: A case study

In a short series on workers’ rights and collective action in India during the coronavirus pandemic and lockdown, P.K. Anand discusses three key examples of worker organizing and resistance, starting with the Federation of App-based Transport Workers.

The rapid growth of the sharing economy and app-based employment has presented tremendous challenges to trade unions across the world. The lack of a formal employment relationship has meant workers are not only unprotected by existing labour laws and regulatory mechanisms but also find it more difficult to organize because they often only have a tenuous connection with their colleagues.

The coronavirus pandemic this year has placed these problems in even sharper relief, particularly for app-based transport workers in cities in the Global South who have seen their incomes squeezed while running the daily risk of infection.

It was in this context that the Indian Federation of App-based Transport Workers (IFAT) was founded in 2019 to provide app-based workers with a collective voice and the support they urgently need. It emerged from the experiences of a drivers’ association in the southern state of Telengana, and initially focused on ride-hailing cab drivers before gradually expanding to include delivery workers.

Working with the International Transport Workers Federation (ITF), Asia-Pacific Region, the organization now claims a membership of more than 20,000 app-based transport and delivery workers across ten major cities in India.

IFAT is committed to championing the rights of drivers and riders of platforms like Ola, Uber, Swiggy, Zomato, etc., through organizing, advocacy campaigns, and collaboration with other unions and civil society organisations.

During the national lockdown between March and June of this year, IFAT and ITF conducted four separate surveys, interviewing more than 5,000 transport and delivery workers in 50 cities. The surveys focused on income levels during the pandemic, the burden of loan repayments, relief and assistance provided by the platforms, and access to welfare schemes offered by state and central governments.

About 90 percent of the workers did not receive any rations or food assistance, and close to 85 percent of them did not receive any financial assistance from either their employer or the government. Even after the easing of the lockdown in early June, around 70 percent of the workers indicated that they had no earnings, while about 20 percent earned between just Rs. 500 to Rs. 1,500 ($7 - $20) per week. With a surge in fuel costs, no additional support for bike maintenance, and extra parking costs, many delivery workers were left without any meaningful earnings by the end of their shifts each day, unable to support themselves or their families.

For Shaik Salauddin, National General Secretary of IFAT, the pandemic has cast further doubt on the credibility of the delivery platforms' claim that drivers are “partners” in the same enterprise. Several platforms sought to burnish their image during the pandemic by advertising large monetary contributions to the Prime Minister’s COVID Care Fund, but at the same time they off-loaded their obligations to drivers onto their customers by initiating crowd-funding campaigns that customers could contribute to.

Platforms in China pursued a similar strategy, with food delivery platform Ele.me offering customers the option of waiting an additional five minutes to give drivers more breathing space. In addition to obfuscating their responsibility by passing it to consumers, platforms in India also lacked transparency in the disbursement of the crowd sourced funds, initiated excessive red tape, and failed to present clear eligibility criteria, Mr. Salauddin pointed out.

Similarly, the distribution of face masks and hand sanitizer to drivers was both limited and haphazard; most drivers had to pay for at least some of these items out of their own pockets.

A consistent and steadfast demand from IFAT has been that the ride-hailing platforms reduce their per-ride commission rate of 25 percent to five percent. This would allow drivers to get back on their feet and be compensated for their losses over the last few months. Workers and the unions have also asked for three months’ compounded interest on vehicle loans to be waived. Neither of these requests have yet to be taken seriously.

During the lockdown, Ola announced a waiver of the rental fees for leased vehicles and asked drivers to return their vehicles to the platform. However, Mr. Salauddin pointed out that there has been no announcement on what happens to the returned vehicles after the easing of the lockdown, thus heightening anxieties for the drivers unable to pay off loans and mortgages and take care of their families. Moreover, they are also apprehensive that Ola could leave them in the lurch by bringing in new drivers for these vehicles.

Concerns have also been raised over the installation of Aarogya Setu health tracking app on phones, as mandated by the central government. Drivers are worried that it would allow companies to surveil workers and collect data on their movements after work hours. The data, moreover, is shared with the government.

In addition to pressuring the authorities, IFAT has also been involved in relief work during the pandemic, offering limited financial resources (especially to women drivers), distributing groceries to financially vulnerable drivers, and supporting some drivers to open makeshift stalls out of their vehicles selling masks, sanitizers, fruit juices, etc.

Crucially, IFAT has also taken direct action, joining in the general strike call from various central trade unions in June as well as supporting strikes by food delivery workers across the country and in Hyderabad, in particular. 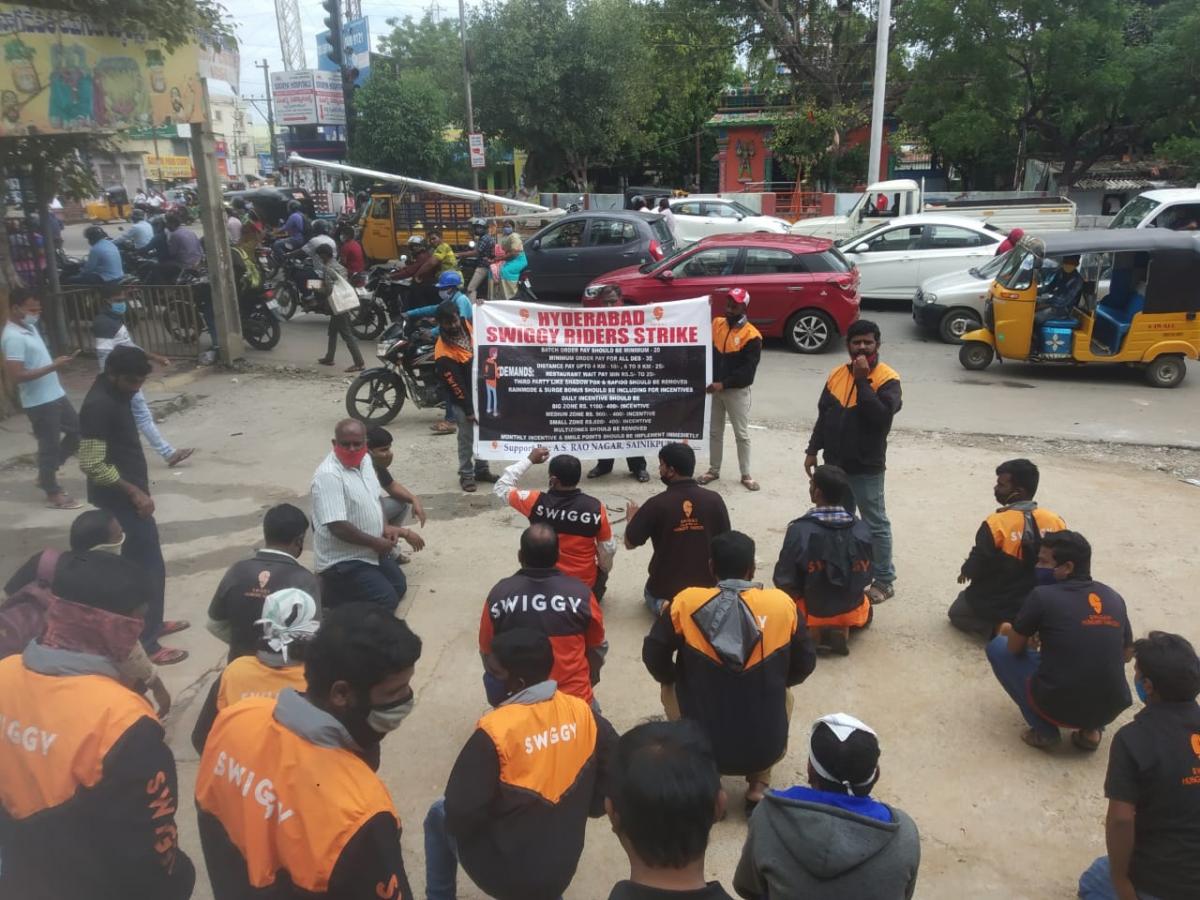 Swiggy drivers on strike in Hyderabad. Photograph courtesy of IFAT

In the first week of August, there were strikes and protest actions by Swiggy food delivery workers in several cities. Workers complained that while they were risking their health and safety by working throughout the lockdown, the platform had been squeezing their incomes and slashing their incentives. Swiggy made arbitrary changes to their pay and incentive structure, including a reduction in the base payment per food order by more than half, from Rs. 35 ($0.47) to Rs. 15 ($0.20).

In Delhi, this was actually the second cut in the base payment this year, after a reduction from Rs. 40 ($0.54) per order in late February and early March. There were also arbitrary changes to restaurant waiting times, rain mode and night charges. Further, the monthly incentive of Rs. 3,000 ($41) for full-time work and Rs. 2,000 ($27) for part-time work have been removed. Claiming data manipulation by the platform, workers demanded greater transparency of the ratings given by customers rather than just an average rating. As noted in the in-depth investigation by People (人物) magazine, all of these abuses are familiar to Meituan and Ele.me food delivery workers in China.

Workers have protested numerous times in Chennai, Delhi, Hyderabad, and Noida. The platforms’ responses, however, have been to issue misleading statements,blacklist workers, and suspend their work IDs.

IFAT believes in staying the course by sustaining its efforts to realize the demands of drivers and delivery workers, building safeguards against arbitrary changes by the platforms, and urging governments to intervene. IFAT hopes to increase its footprint by reaching out to more drivers and delivery workers, raising awareness and building consciousness. The emphasis has always been on steadily building capacity and giving voice to platform-based workers.