Despite the central government’s attempts to tackle the alarming gap between the rich and the poor in China, the latest job data shows that wages in the two highest paid sectors, finance and high-technology, were growing at a faster rate than those in already poorly paid manufacturing and service industries.

A survey conducted by the human resources company, 51job.com, showed that salaries in the financial sector increased by 10.4 percent in 2013 and that wages were expected to increase even more this year because qualified staff were still in short supply. Salaries in high-tech industries increased by 9.9 percent last year, while those in bio-pharmaceuticals went up by 9.2 percent, the survey found. 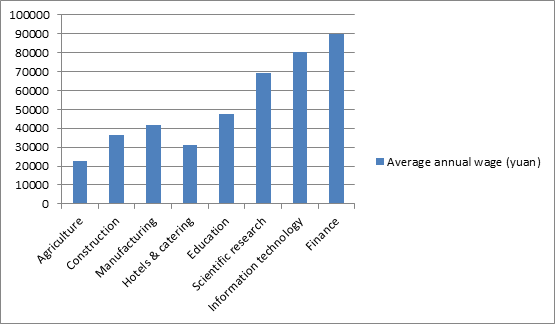 While wages in the manufacturing sector went up rapidly from 2010 to 2012, wage increases seemed to level off during 2013 as businesses adjusted to the general slowdown in the Chinese economy and the decreased demand for Chinese consumer products in North America, Europe and Japan. Many manufacturers are closing down, merging or relocating as costs in the south-eastern coastal provinces continue to rise but those that remain are still struggling to hire and retain staff because wages remain at such a relatively low level.

In the financial and high-tech sectors, higher profits and an acute shortage of qualified labour has allowed wages to rise at a much higher rate. However, many employees in these sectors work incredibly long hours, and the stress and pressure they face on a daily basis is well documented, not just in China but across the globe.

For an overview of the employment market and wages in China, please see the section on wages in the CLB resource centre.