How Weibo helped Dongguan factory workers get their voices heard

When the boss refuses to listen to workers’ grievances, those workers often have no option but to go on strike. But whether or not this tactic works sometimes depends on workers’ media advocacy skills.

On 7 May, workers at a Taiwanese-owned Crocs shoe factory in Dongguan heard that their monthly performance bonus would fall from 500 yuan to 100 yuan. Given that the bonus usually accounted for one fifth of their income, this was a big deal. They complained to the management who as usual didn’t bother to listen. In the afternoon of 8 May, around 1,000 workers, one third of the workforce, decided not to go to work.

But given the relatively isolated location of the factory, well hidden within a gigantic industrial park, the workers’ action didn’t get much attention, not to mention government intervention. When CLB called the factory office, the factory denied the bonus dispute by saying that workers wouldn’t know their bonus until the middle of this month.

One young worker, in anticipation of this official response, started posting strike information on his Weibo page in order to generate public support and media attention. To validate his account, he posted a photo showing the empty workshop during working hours. 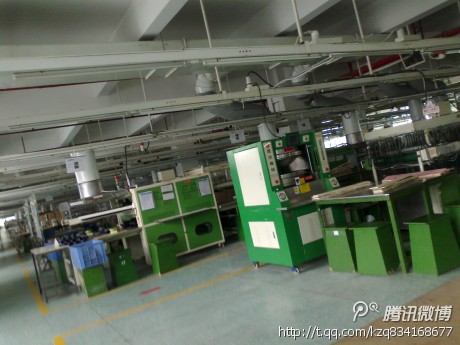 CLB then posted a story about the strike on our Weibo page with the worker’s photographic evidence. The story immediately got the attention of labour rights activists and news reporters in Guangdong. Within one hour or so, the post had been retweeted more than 50 times.

In the late afternoon, the young worker told CLB that around five reporters had gathered at the factory gate but their attempts to get in had been foiled by security. The local labour bureau showed up as well.

In the morning of 9 May, CLB learnt that after government mediation, factory management had agreed to raise the bonus from the initial 100 yuan to at least 300 yuan. As a result the factory’s operations have basically returned to normal.

The young worker could not hide his exuberance when his effort to seek media attention during the strike paid off and reaped a substantial bonus increase for over one thousand of his coworkers.

In contrast, late last month, hundreds of employees stopped working at a Chongqing auto factory in protest against increasing workloads and stagnant pay levels over the last few years. The three-day strike got no traditional media coverage and only limited social media exposure and was eventually subdued by management’s threat of dismissal.

It is hard to imagine how the one thousand Dongguan workers’ voices could have been heard without one young worker’s persistent and successful media liaison, especially the use of Weibo. Microblogs have become a relatively free platform for workers, labour scholars, rights advocates, journalists and even trade union officials to interact and exchange information. But to get your particular cause noticed on this overloaded platform definitely requires skill and persistence. And it’s comforting to see China’s tightening control over this new social platform hasn’t balked workers’ attempts to get their voices heard.