The number of work-related accidents and deaths in China has declined steadily since the mid-2000s when more than 100,000 workers were killed every year. In 2017, there was a record low of 38,000 worker deaths, according to official statistics, a total of around 104 deaths per day.

However, the official figures only tell part of the story. While improvements have certainly been made, new work hazards are emerging in China’s informal economy, and many employers continue to prioritise productivity and profit above work safety.

CLB’s new introduction to work safety in China (published today) presents a historical overview and assesses the extent to which the current legal and administrative framework has helped to protect workers. It uses CLB’s Workplace Accident Map to pinpoint China’s most dangerous industries, examines the most common hazards faced by workers, and shows how accidents and deaths can be excluded from the official statistics.

The Work Accident Map shows that food delivery drivers and sanitation workers have two of the most dangerous jobs in China today.  However, if these workers are killed or injured at work, that incident will most likely be classified by the authorities as a traffic accident. 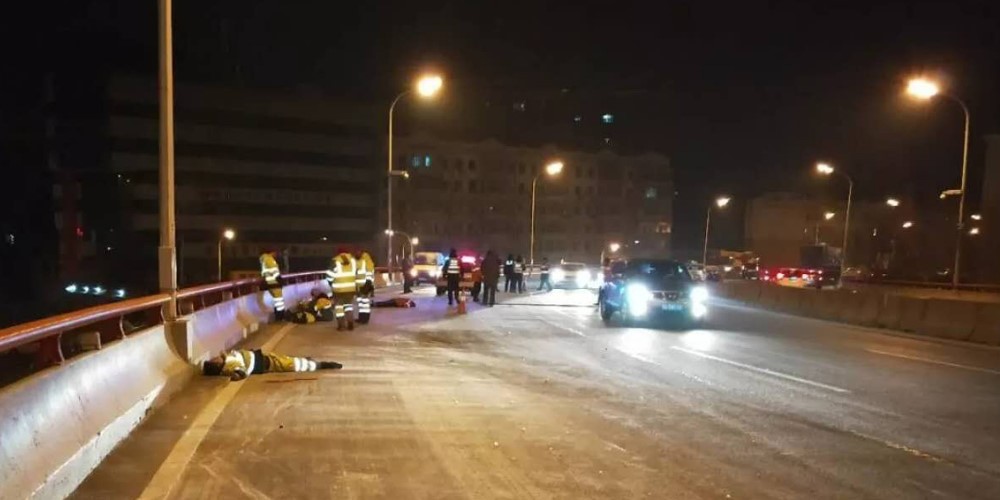 In one tragic example, five sanitation workers were killed and another two badly injured when they were hit by a car on a highway in the northern city of Harbin at five o’clock in the morning on 22 December 2017 (above photo). The road was icy and driver reportedly had a blood alcohol count of nearly twice the legal limit.

Food delivery driver Yang Song was killed in downtown Chongqing in August of 2017 while rushing to complete his lunchtime orders during a 14 hour shift. The police determined that Yang was solely responsible for the accident, and the food delivery company insisted that Yang was merely an “independent contractor,” and therefore his case, like many others, should not be classified as a work accident or covered by work-related accident insurance.

Many elderly sanitation workers are also not covered by accident insurance because they are over the statutory retirement age and therefore not classified as workers.

It is estimated that around six million workers in China have contracted the deadly lung disease pneumoconiosis after working in mines, construction sites and factories filled with mineral dust. However, only about ten percent of these workers ever got their illness classified as work-related because of the numerous bureaucratic obstacles placed in front of them.

Mental and physical health problems and even death from overwork are extremely common in China, especially among white collar workers, but again getting such deaths classified as work-related is highly problematic because it is very difficult to prove the death was a direct result of excessive work.

When 19 migrant workers and their children died in a horrific fire in a southern Beijing shanty town on 18 November, the incident was not seen as directly work-related. However, the victims who worked in nearby garment factories, like the vast majority of migrant workers, simply could not afford to live anywhere else apart from the over-crowded fire trap they died in.

It used to be the case that factories provided dormitory accommodation for their employees. In 2011, around half of all migrant workers lived in dormitories or on their job sites, and only 35 percent lived in rented accommodation. In 2016, however, the proportion of migrant workers living in rented accommodation had nearly doubled to more than 60 percent, while only 13.4 percent lived in housing provided by their employer. In most cases, workers and their families living outside the factory have no option but to rent small rooms in cramped, poorly built and often hazardous apartment buildings nearby.

Less than a month after 18 November tragedy, another fire broke out at migrant worker apartment building less than 20 kilometres away in Beijing, killing five people and injuring another eight, and a fire at a residential building for migrant workers in southern suburbs of Shanghai killed one person and injured four.

The dangers faced by China’s low-paid workers are numerous and sadly commonplace. Moreover, the vast majority of workplace accidents involve just a handful of people and as such do not get nearly the same attention from governmental officials and the media as major disasters like fires and explosions. Until the government starts to take a more constructive approach and allows workers themselves to play an active role in work safety, work-related accidents and deaths will continue to be an everyday occurrence in China.

CLB’s introduction to Work Safety is one of seven backgrounders published by CLB on the key issues in labour relations in China today. These include: An FAQ on labour relations, Employment and Wages, Workplace discrimination, Social security, the labour dispute resolution system, and Migrant workers and their children.