A group of 12 hospital security guards in Guangzhou have been detained for 50 days and now face criminal prosecution after staging a high-profile protest at a wide range of management abuses on 19 August 2013.

All 12 of the workers have now been formally arrested by the local police and it is likely that they will be prosecuted for “gathering a crowd to disturb social order” (聚众扰乱社会秩序). If convicted, they could be given a custodial sentence. 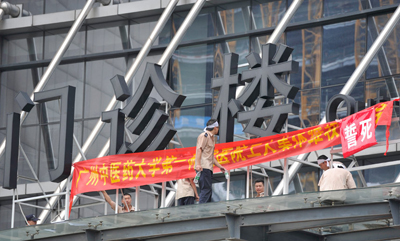 Security guards protest above the hospital entrance on 19 August

One of the lawyers involved in the case, Duan Yi from the Laowei law firm, said he could not recall such a large group of workers ever being detained and charged with criminal offences in one single case. In most cases where protests have got out of hand, workers have been administratively detained for a short period. It is unusual for workers to face criminal charges. As China Labour Bulletin Deputy Director Cai Chongguo pointed out, the decision by the local authorities to criminally charge these workers represents a “retrograde step.”

“In any country, if the employer acts in an unreasonable and arrogant manner, they should expect a ten-fold response from the workers. But here the workers were remarkably patient and reasonable and yet they still got detained en masse,” he said.

The security guards had been involved in a long running dispute at the Guangzhou Chinese Medicine University Hospital (广州中医药大学第一附属医院), in which they had consistently sought a negotiated settlement as a means of resolving their grievances.

As early as 13 May, a group of 126 healthcare workers and security guards at the hospital had submitted a petition to the Guangzhou Federation of Trade Unions, detailing the labour abuses at the hospital, including failing to provide labour contracts, unequal pay for the same work, unpaid social insurance contributions and overtime payment arrears.

However, it was not until August that the hospital management agreed to discuss these issues. And on 7 August, the healthcare workers agreed to a deal in which they would reportedly get 20,000 yuan per person in compensation and sign new contracts with an employment agency. The security guards were excluded from the deal.

On 16 August, two of the guards’ representatives, Meng Han and Ou Guanglong, did talk with the hospital management, but according to their lawyer, the hospital only gave the workers two options: take an offer of 3,100 yuan and keep quiet, or wait until the 19th and get sacked.

It was then that 15 of the guards felt that they had no option but to escalate their protest by staging a demonstration on the roof of the hospital building on 19 August. Police removed 14 of guards and 12 of them were detained. They have now remained in detention for 50 days.

CLB hopes that the Guangdong authorities will release these 12 workers as quickly as possible, and help facilitate a negotiated settlement in this long-running dispute between labour and management.