A Guangzhou court has dismissed a lawsuit brought by 34 shipyard workers who claimed their employer, CSSC Guangzhou Longxue Shipbuilding Co. Ltd, had colluded with its affiliated hospital to conceal the results of health checks which should have revealed the early stages of the deadly lung disease pneumoconiosis.

The Liwan District Court ruled that the workers did not prove they’d had their medical checks done at the Guangzhou Shipbuilding Factory Hospital between 2009 and 2011, and said that their current medical condition had nothing to do with the medical test results in the past. 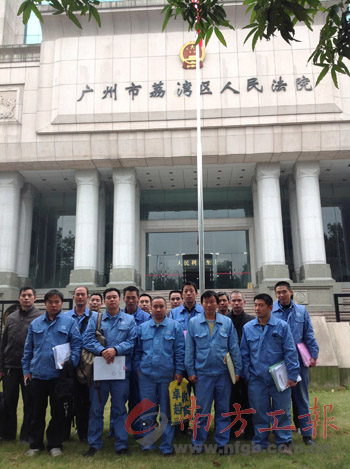 Some of the workers (left) described the verdict as “total bullshit” and said they would meet their lawyers to discuss an appeal.

The case originated in November 2012, when one worker left the company and did his final medical check-up at the Guangzhou Shipbuilding Factory Hospital. The results showed no abnormalities on his lungs but just seven days later when he went to a local hospital that specialized in occupational disease, he was promptly diagnosed with pneumoconiosis.

When news of the worker’s test results started to spread, many of his co-workers followed suit and got tested independently. Eventually, 23 workers were diagnosed with suspected pneumoconiosis. Most of the workers were welders who had worked for many years in cramped, dust-filled ship compartments.

The appalling working conditions were revealed on a Guangzhou television news program last year, which showed how workers, wearing flimsy face masks, were covered in black soot within just a few hours. However, despite all the evidence of hazardous working conditions at the shipyard, the court still chose to dismiss the lawsuit.

The key problem for the worker litigants was the health checks were commissioned by the employer and the results were sent to the employer, making it very difficult for them to get their hands on the evidence.

The media attention garnered by the case did at least highlight once again the at times blatant collusion between hospitals and employers in high dust industries to conceal or fabricate the results of employee health checks. And, encouragingly, more workers are now starting to hold hospitals as well as their employers to account and this will eventually put more pressure on those hospitals to put the patient rather than the employer first.