Following the announcement last month that civil servants and public sector workers will be in line for a pay increase to offset proposed pension reforms, the Chinese Communist Party and government announced on 15 February that the country’s police are to get a pay rise as well.

In a wide-ranging proposal on reform of China’s public security system (关于全面深化公安改革若干重大问题的框架意见), the Party promised to create a more professional and more accountable police force, and one that will be appropriately compensated for its improved performance.

Currently, the take home pay of China’s nearly two million police officers varies considerably according to rank, division and location but there is little doubt that many lower ranking officers are very poorly paid. Many of the police officers sent to contain or intervene in strikes and other worker protests, for example, probably earn little more than the workers themselves. See photo below of Yue Yuen factory strike in April 2014. 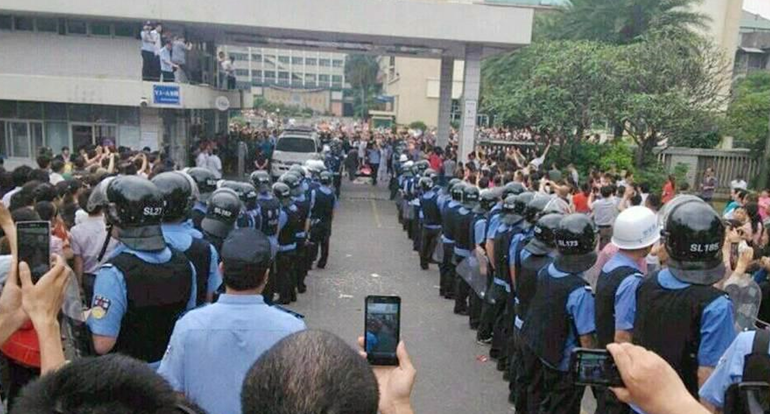 However, the increased use of force by many police officers in worker protests has eroded much of the sympathy that workers may have had for them. This was tragically illustrated last December when the mother of a construction worker was allegedly beaten to death by police during a protest over wage arrears.

Low pay and lack of resources are two of the main reasons why police in China so often resort to shakedowns in traffic stops, raids on brothels etc. in order to make extra money. These illegal acts in turn further tarnish the already blemished reputation of the police force.

One of the main goals of the new central government proposal is clearly to improve the reputation and standing of the police in the eyes of the public but a lot of work will have to be done over the course of the next year or so to win back even a fraction of the public trust.