Food delivery workers in at least five cities across China have staged a series of strikes protesting arbitrary reductions in pay rates introduced after the Lunar New Year Holiday.

Workers for both major food delivery platforms, Meituan and Ele.me, stopped taking orders in Linyi, Shandong on 18 February, in Dongguan on 20 February, Jinan on 24 February, Pinghu in Zhejiang on 25 February, and in Qingdao on 27 February. 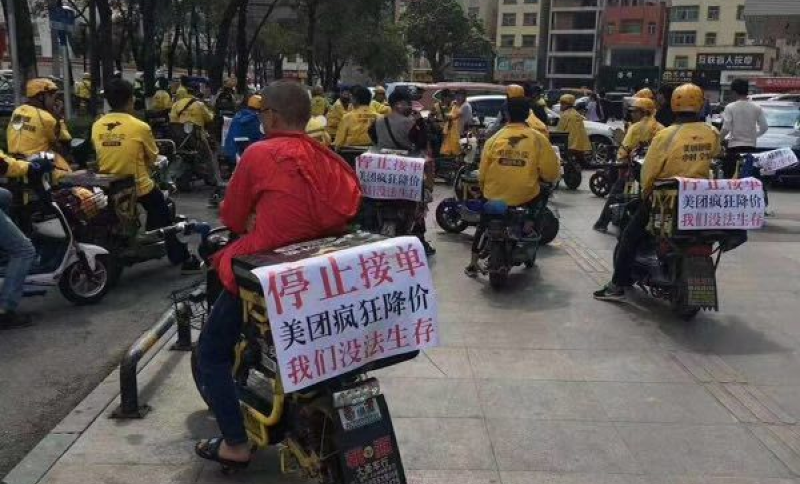 Drivers for Meituan in Linyi explained to local media that delivery rates had been drastically reduced following the Lunar New Year Holiday. There are typically two types of order, fixed rate orders (专送) that drivers have to accept and variable rate orders (众包) which drivers can compete for. It was the per kilometre rates for variable rate orders that were suddenly cut after the New Year.

One driver, Mr Pan, said that prior to the New Year, accepting 40 to 50 orders a day would bring in an income of around 230 yuan, but now, after the pay cut, the same volume of work will only net an income of 130 yuan each day.

Moreover, many drivers complained that the App they are forced to use when taking orders deliberately under-calculates the actual distance travelled, thereby further reducing their income. Other drivers noted that the time allotted to deliver orders had also been reduced. Drivers in Pinghu also stressed the fact that they had no pension and didn’t get overtime payments despite having to work more than ten hours a day.

In response to the strikes, Meituan has reportedly blacklisted many of the workers who organized the work stoppages.

Back in June 2017, China’s first trade union for food delivery workers was established in Shanghai. So far however it has had little impact. Workers are still subject to arbitrary rate adjustments from the food delivery companies that dominate the market and they have little recourse except to stage strikes and protests when the situation becomes intolerable.

The last major series of strikes occurred in the summer of 2018 when food delivery workers across the whole of China, in Yunnan, Jiangsu, Shandong, Zhejiang, Chongqing, Shanghai, Guangdong, Jilin, Hunan, Guangxi and Shanxi all stopped taking orders in protest at a wide range of issues including pay levels, delivery times, fuel costs, insurance and high accident rates.

In one positive development however, the Beijing municipal couriers trade union signed a collective agreement with industry representatives this month to improve working conditions in the express delivery industry. The agreement focuses on improving work safety rather than pay rates but it does at least represent a step in the right direction. A similar agreement for food delivery workers would be welcome.