Food delivery drivers in Harbin called for a strike this week over low pay, one of many recent actions reflecting stagnating conditions in China’s logistics industry.

Drivers at Feng Niao, a subsidiary of food delivery giant Ele.me, posted a call on social media after the company unilaterally instituted new work rules that reduced their commissions, lowering their pay to intolerable levels. The call stated “there’s basically no way to for us to get by” and that “our conditions no longer allow us to remain silent.”

Couriers in China’s logistics industry have been facing steadily worsening conditions, and collective actions by couriers are on the rise in response. CLB Strike Map recorded that worker actions in logistics, including food delivery and other e-commerce couriers, tripled from 2015 to 2016.

Earlier this month Meituan drivers in Dali, Yunnan went on strike protesting dramatic increases in workload forced on them by the company; Meituan is one of Ele.me’s main competitors in food delivery. 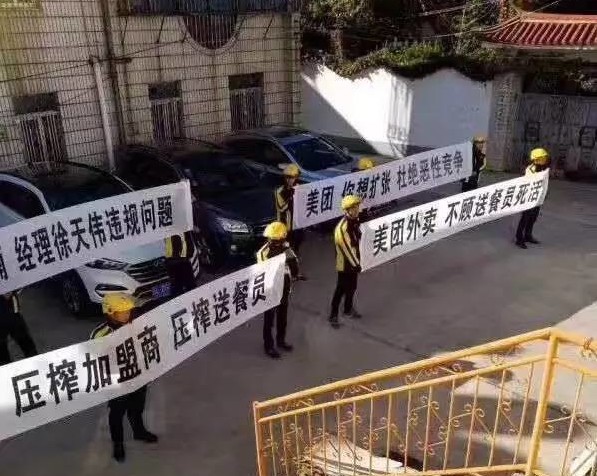 Stagnant wages and worsening conditions have been a problem for couriers throughout China’s booming logistics industry, from food delivery to express parcel services. Drivers work 10, 12 even 14 hour days, often without basic benefits like overtime pay or social insurance. Just last month JD.com CEO Liu Qiandong claimed that 90% of delivery drivers have little social insurance, or none at all.

Couriers have been called the “shovels” of China’s recent e-commerce “gold rush”, conveniently and inexpensively delivering ready cooked food and online shopping goods to the doorsteps of mostly urban consumers, and like shovels in a mining frenzy, these workers have found themselves quickly worn out and cast aside.

There are an estimated 2 million couriers across China, most of them migrant workers hailing from the countryside looking for work in cities. According to one report, most delivery drivers are men between 20 and 30 years of age, and leave their jobs within a year of starting.

Workers first flocked to the express delivery business for its high wages, but conditions have deteriorated, including stagnating pay, lack of security and benefits, and increased pressure from companies in the form of fines, harsh work rules and excessive working hours. Many in express package delivery have switched to food delivery in search of better pay and more tolerable workload, but have found the pay and conditions to be roughly the same.

Couriers’ pay is closely tied to performance, often composed of a basic wage plus various incentives like good customer ratings and per package rates, which are also subject to penalties, pushing workers faster, harder and increasing psychological pressure. Recent domestic media reports revealed that many couriers want to switch careers, some even at the behest of family members who complained of long hours and lack of opportunity for career advancement.

Poor working conditions of couriers has sparked a national discussion after Lunar New Year in with news about strikes, closures and labour shortages.  After news of labor shortages after holiday, some inicially speculated that couriers were simply slow to return to work after New Year, it has become clear that labour shortages persist today, weeks after the holiday.

At a distribution center in Shenzhen, deliveries ground to a halt in the weeks following the holiday after too many drivers quit their jobs. Drivers reported working 18 hour days, making around 2-3000 yuan per month after deduction of heavy fines.

Officials and labour scholars are beginning to put forward responses to the labour problems in this new industry. Labour experts have called for increasing wages and benefits in order to decrease turnover and increase protection of workers. In addition, the State Post Bureau recently held a meeting calling for increased measures to protect couriers, including calling on China’s national union, the ACFTU, to step up organizing in the industry. The Worker’s Daily, China's official union news outlet, has called for new legal protections of workers in online industries subject to neglect of labour law.

Delivery drivers have shown their ability to self organize and fight for their rights in the new economy, as China’s economic profile continues to shift toward services and consumption-driven growth. The call to strike in Harbin closed with a call to fellow workers: “We hope that if our Feng Niao brothers and sisters across the country are receiving the same unequal treatment, please stand up! Feng Niao is us, and we are Feng Niao!”