The massive landslide at a hydropower construction site in Fujian on 8 May has killed 35 workers, with one listed as missing, and dozens of others injured, according to China’s state media.

The most likely cause of the landslide was the torrential rain which had inundated the region for several days previously. An estimated 100,000 cubic metres of rock and mud crashed into a workers’ dormitory and an office building at the site of an extension of the Chitan hydropower station in Taining county early on Sunday morning.

A massive rescue effort involving more than 1,000 firefighters, army and police personnel was launched immediately but it was hampered by other landslides in the area which had washed out connecting roads to the site. 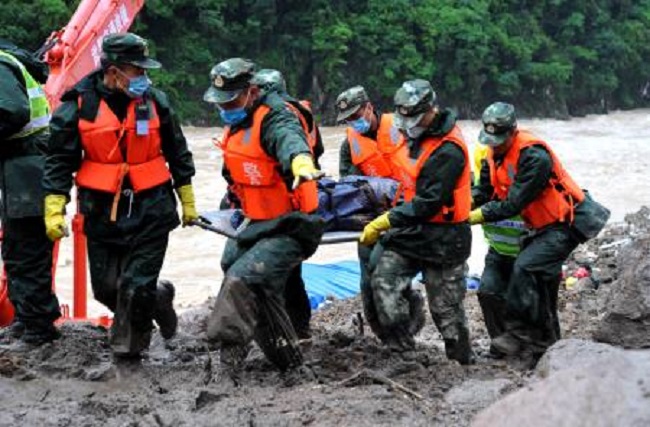 Rescue work at the site of the Taining landslide

The state-owned China Huadian Corporation, which is responsible for the hydropower project, has denied accusations it endangered worker safety by locating the site near a reservoir’s flood discharge area. Li Lixin, general manager of China Huadian Corporation’s Fujian branch, was quoted as saying the location was chosen after “rigorous evaluation,” and that regulations were strictly followed during construction.

If true, this would certainly be an improvement on many other accident sites that have wilfully disregarded obvious dangers such as the coal mine in Shaanxi that had three flooding incidents in the three years leading up to a major flood on 25 April, which killed 11 miners, but did nothing to improve safety.

However, the main danger stems from the fact that most if not all worker accommodation at construction sites and factory buildings is very flimsily built and can be easily damaged or destroyed by unexpected high winds, flash floods, mud flows and nearby explosions. The tornadoes that swept through the Pearl River Delta in October last year are clear evidence of this.

In the first four months of this year, there were 13,859 work-related accidents in China, leading to 7,385 deaths, according to official figures released on 5 May by the State Administration of Work Safety. This represented a 14.4 percent and 17.9 percent drop respectively when compared with the same period last year, it said, but it still averages out at 115 accidents and 61 deaths every day in China.

There were at least ten major workplace accidents in the first four months of this year; including a crane collapse in Dongguan that killed 18 construction workers, a coal mine accident in Shanxi that killed 20 miners and the demolition of a fireworks factory in Guiyang which killed at least 22 people. See CLB’s Work Accident Map for more details.