Every day at 8:00 in the morning, Yang Song put on his uniform and started his 14-hour shift delivering food to office workers in downtown Chongqing. Around noon on 12 August, Yang was rushing to meet lunch orders when he lost control of his motorcycle and crashed at a busy intersection. He suffered severe cranial damage and died in hospital the next day. He was 23 years old.

In an emotional appeal on Weibo, Yang’s mother sought support for her son online:

My son died while delivering orders, it was a workplace accident and he should be compensated accordingly...  We are just farmers; we don’t know what to do now apart from cry till we go blind. Can anybody help us?

However both Yang’s employer Meituan and the Chongqing authorities were unsympathetic, claiming Yang was at fault for the accident and was not entitled to any compensation. Yang had only started working for Meituan, China’s biggest online food delivery platform, on 4 July, and had yet to receive his first pay cheque.

The police investigation revealed that the motorcycle involved in the accident had been purchased by Yang under his own name, not the company’s name, and had not yet been registered or insured. The police report, issued 25 September, remarked that Yang was operating a vehicle type that did not correspond with his driver’s license, he was not wearing a safety helmet and he did not have third party insurance. It concluded that according to all evidence and relevant legislation: “Yang Song is the sole responsible party for the accident.”

Yang’s mother claimed that her son had signed a formal employment contract with Meituan and did have insurance but the documents were nowhere to be found. The manager of the Meituan branch Yang worked for, Liu Yanping, was reluctant to answer her calls, and on 25 October he vanished entirely after closing down the branch office. A month later Yang’s parents received a formal letter demanding payment of the loan Yang had taken out for the purchase of the motorcycle as requested by Meituan. 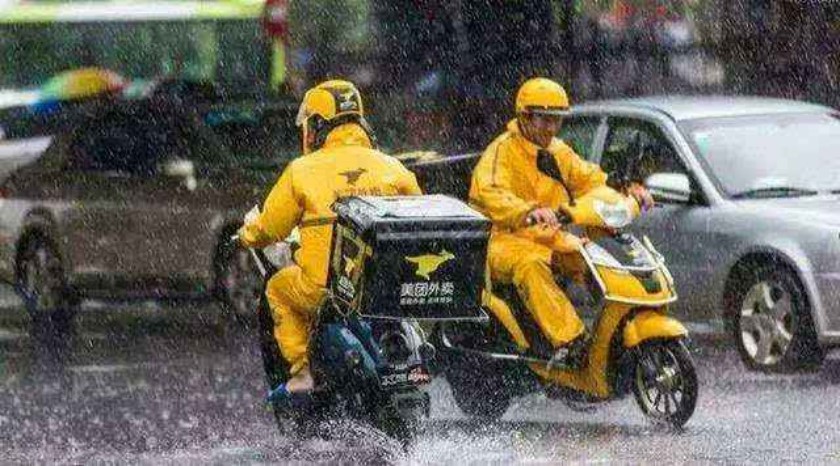 Yang’s death was not an isolated incident. In Shanghai, there is one fatal accident involving a delivery driver every two and a half days, according to statistics in the Worker’s Daily. In nearby Nanjing, the People’s Daily reported, there were 3,242 accidents involving delivery drivers just in the first half of 2017. The article stated that food delivery accounted for about 90 percent of all traffic accidents in Nanjing, and that about half of those could be attributed to Meituan alone. Meituan reportedly now has a 45 percent share of China’s US$37 billion online food delivery business.

In the highly competitive food delivery industry, drivers are forced to race against the clock to complete orders, or face negative reviews and penalties like salary deductions. A 15 minute delay equals a 50 percent deduction of commission and a half hour delay means no commission at all. Drivers are dependent on commissions of one to six yuan per delivery because their basic wage of 2,000 yuan to 3,000 yuan is far from a living wage, particularly after expenses are taken into account. Moreover, drivers are not guaranteed any work and have to remain on standby for ten to 12 hours a day, with no overtime payments.

The food delivery business in China is increasingly adopting an informal relationship with “individual contractors” who bid for delivery orders via smartphone apps without signing any formal contract with the company. These contractors lack the legal protection and benefits such as pensions, unemployment, medical, work-related injury and maternity insurance and housing subsidies that are given to employees who have signed a formal employment contract.

The cutthroat nature of the business means that road safety takes a back seat to profit and accidents are inevitable. Accidents are not simply the result of drivers’ “lack of safety awareness,” as Beijing court officials claimed last month. Drivers are very aware of safety; it is just that, as one driver told the People’s Daily:  “We have no choice. If we followed all traffic rules we would never complete our deliveries on time!”

However, the only legislation currently on the books, the Regulations on Food Delivery Services seems to blame delivery drivers for their own misfortune and leaves the online platforms and restaurants off the hook. The Regulations fail to clearly define the responsibilities and duties of the three parties, creating a free-for-all in which the only rule is “work more to earn more.”

Many commentators in China are now realising that simply blaming drivers for accidents is not going to solve anything.

“If most of the workforce in an industry need to work long hours to meet their targets or to make a decent salary, then it is clear their pay is not satisfactory and should be adjusted,” said Shen Zhenjia in the Workers Daily.

In discussing the need for better regulations governing the food delivery industry, Su Hainan, vice-president of the China Association for Labour Studies stressed: “The voices of workers should not be ignored in the process of drafting regulations that directly affect their interests.”

While regulation is clearly needed, there is an even more pressing need for workers to organize and demand better pay and safer working conditions so that drivers are protected in the event of an accident.

Su Hainan suggested that workers in the food delivery industrial sector should engage in collective bargaining with their employers via worker representatives or the trade union, and then sign a collective agreement to “protect workers’ rights and promote a healthy sectoral development.”