Two separate tornadoes killed at least 12 people and left several hundred injured on 14 May as they passed through industrial areas outside of Wuhan and the manufacturing township of Shengze, near Suzhou, state media reported.

The Wuhan tornado struck a sprawling economic development zone ten kilometres southeast of the city on the evening of the 14th, destroying factories and workers’ housing, and ripping apart construction sites. At least eight people were killed and 230 were injured, according to official figures released on 15 May.

Reporters visiting one badly affected industrial park described scenes of devastation, with vast swathes of poorly constructed housing blown away. A tower crane at a construction site for a waste incinerator plant was bent double, they said.

At least four people died during the Shengze tornado and 149 were injured, according to local government officials. Once again, it was the lowrise factory districts that were worst affected with 17 factories, covering an area of 130,000 square metres, badly damaged. Local officials later conceded that several of the buildings damaged had been illegal structures.

Moreover, on 10 May, just four days before the Wuhan tornado struck, two workers were killed during a severe thunderstorm in the city. They were cleaning the exterior wall of a highrise building when high winds caught the gondola they were working in and smashed it against the side of the building. The two workers were rescued at the scene but died later from their injuries in hospital.

The brother-in-law of one of the workers told CLB that the construction company and the main contractor had swiftly paid compensation to the bereaved families under pressure from the local government. The cause of the accident is still under investigation but the brother-in-law said the construction company should have been aware of the weather forecast at the time. “At least one hour before the accident, the sky was extremely dark and anyone with common sense would know a thunderstorm was coming,” he said.

The pattern of worker injuries and property damage seen in Wuhan and Shengze is well-established and was entirely predictable. Six years earlier, on 4 October 2015, two tornadoes swept through the manufacturing districts of the Pearl River Delta, killing at least six people and injuring several hundred others. 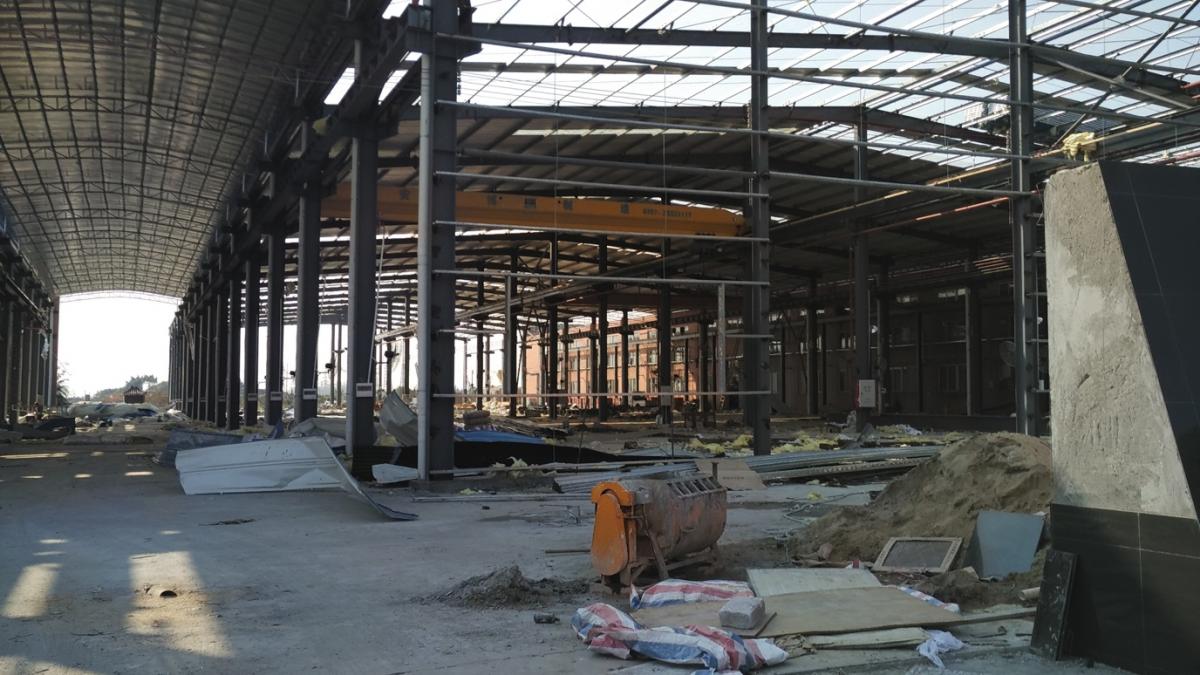 Damage to a Pearl River Delta factory still evident two weeks after the event in 2015.

An investigation by China Labour Bulletin into the disaster at the time revealed that the factories in the tornadoes’ path were poorly constructed, there were no emergency evacuation plans in place. Many workers did not even have medical or work-related injury insurance to cover their medical costs.

Government officials often claim that extreme weather events are difficult to predict and therefore difficult to guard against. However, it is always the shoddiest factory buildings and poorly-built worker accommodations that are most vulnerable to high winds and flooding. And it is low-paid workers, usually migrant workers, who are least able to cope after a disaster.

Workers on construction and mining projects often live on-site in temporary accommodation, putting them even further at risk. In August 2015, for example, at least 56 people died when a massive landslide inundated a small mining community in rural Shaanxi. Most of the workers living at the temporary site near the mine came from local villages but some came from as far afield as the coastal province of Zhejiang.

The workers at the mine could earn a relatively high monthly salary of up to 7,000 yuan but the very obvious risks were clearly far too high.