Sanitation workers in the southern city of Guangzhou have had considerable success over the last few years in taking collective action to improve their pay and working conditions.

However, the tragic death of Wang Shoucun, a 70-year-old sanitation worker in the northern city of Datong, underscores the fact that far too many elderly cleaners and street sweepers are still vulnerable and unprotected.

Although he was well beyond retirement age, Wang took a job two years ago at a refuse processing station in Datong in order to support his impoverished family. He earned just 1,500 yuan a month, was required to live on-site and be on duty 24 hours a day, seven days a week, whenever a delivery was made to the refuse station.

On the morning of 14 October, Wang reached for what he thought was a water bottle and drank the contents. The bottle contained an industrial solvent known as 1,2,3-Trichloropropane. Wang collapsed and was rushed to the local emergency room. However the hospital failed to realise the severity of the situation and released Wang the same evening.

When Wang started to vomit blood the next day it was already too late. The local hospital said he had serious liver failure and would have to go to Beijing, more than 350 kilometres away, for specialist treatment. 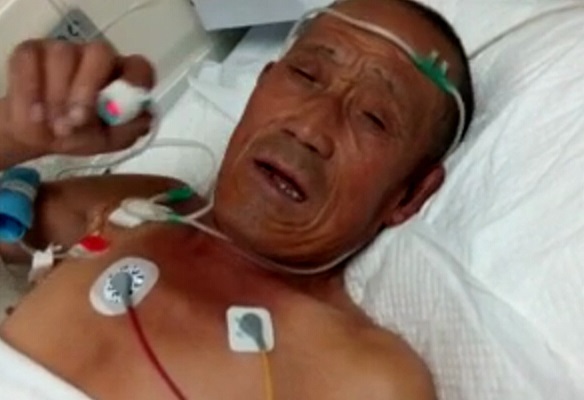 Since Wang was not insured, his family had to borrow from relatives and loan sharks to pay the 140,000 yuan in medical bills charged by the Beijing military hospital he was taken to. Wang’s son and two daughters made repeated trips back to Datong to ask the sanitation company for help but they didn’t get a penny.

After eight days, the hospital stopped treatment because the family ran out of money. They were forced to take Wang back to his hometown in the countryside of Datong where he died on 28 October.

Wang’s family is trying to get compensation from the local social security authority, claiming that Wang’s death was work-related, and are seeking legal aid from the local trade union federation, but so far to no avail.

The family are unlikely to get work-related injury compensation however because Wang was well-over the statutory retirement age and many local governments and courts have argued that post-retirement-age employees are no longer protected by labour law. Instead, they claim that elderly workers are merely service providers.

In one case in the southern city of Foshan in 2013, five elderly sanitation workers who were demanding compensation for wages in arrears and years of unpaid overtime, social insurance contributions and other allowances were told by the courts that they were not eligible for compensation because they had already exceeded the statutory retirement age.

This is a serious problem because elderly workers make up a huge proportion all sanitation workers in China. Not only are they poorly paid and have to work long hours in hazardous conditions, they have next to no legal protection.

The number of street sweepers killed or badly injured in traffic accidents every month, for example, is startling. In November alone, CLB’s Work Accident Map recorded 13 incidents in which sanitation workers were killed or injured by moving vehicles. Many of these workers were elderly, came from poor families and had no medical insurance.

As individuals, these workers, like Wang Shoucun, are in a very vulnerable position. However, as the Guangzhou sanitation workers have shown, taking collective action can bring about positive results.

Most recently, a group of 40 sanitation workers in the district of Shatou were able to end their precarious agency labour existence and sign new contracts directly with the cleaning company that employed them. This followed a long-running dispute in the University Town area of the city in which around 200 workers took collective action to force the boss to come to the negotiating table.

In both these cases, it was the well-established and respected Panyu Workers Service Centre that was instrumental in helping the workers take collective action and defend their rights to decent pay and proper employment contracts.

The centre’s director Zeng Feiyang, and staff members Zhu Xiaomei and Meng Han are currently being held in police custody as part of sustained attack in labour groups in the Guangzhou area.