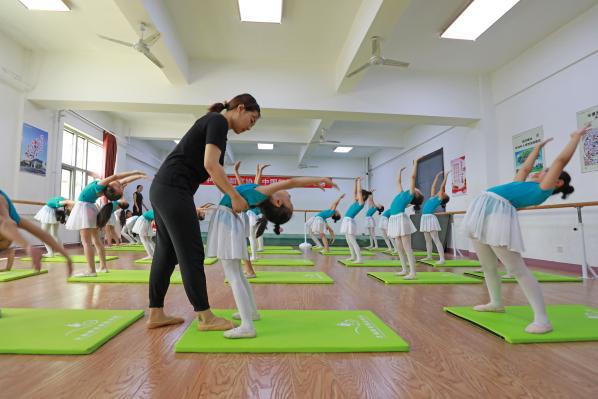 China Labour Bulletin’s mapping data collected in October 2022 shows that wage arrears for employees of educational institutions, such as English and arts schools, are common across the country. This comes on the heels of government regulations on private tutoring last year, plus the pandemic's effects on in-person learning.

In October, CLB’s mapping data shows a number of incidents of wage arrears at English and arts schools across China. One example is that on 29 October, at an art school in Xi’an, Shaanxi province, employees complained of not being paid for two months, plus their social security hadn’t been paid for half a year and holiday wages were deducted. The company asked the employees to reallocate how teachers spent student funds, causing parents to pay additional fees on performance evaluations. Even worse, the school changed its legal name in an attempt to avoid liability.

Wage arrears were also reported by workers at a dance school in Xi’an and a music school in Yantai, Shandong province, and art schools in Wuhan, Hubei province; and Chengdu, Sichuan province. Educational institutions in China have been suffering not only because their activities were disrupted because of the pandemic, but also because of national policies regulating private tutoring. These hardships have led to over 300,000 institutions closing down as of the end of 2021, according to China Youth Daily.

China’s official trade union should actively represent educational sector employees and help them recover their wages. Article 27 of the Labour Law outlines the legal protections for workers when a company engages in mass layoffs or goes bankrupt and mentions the role of the trade union. Under the law, the company must give notice 30 days in advance to the trade union or to workers, hold a consultation, and report to the local labour bureau before proceeding. The trade union should seek for the enterprise to explain its operating conditions and financial situation for the purpose of holding the company accountable to pay workers for labour performed and uphold the terms of their labour contracts.

However, in the case of the art school in Xi’an, CLB could not find any information on the municipal federation of trade union’s website regarding supporting workers of educational institutions, even though the sector has been affected for over one year. Rather, much of the online material is about boosting the business environment in the region. A real trade union must protect the most basic rights and interests of workers, especially the payment of wages. 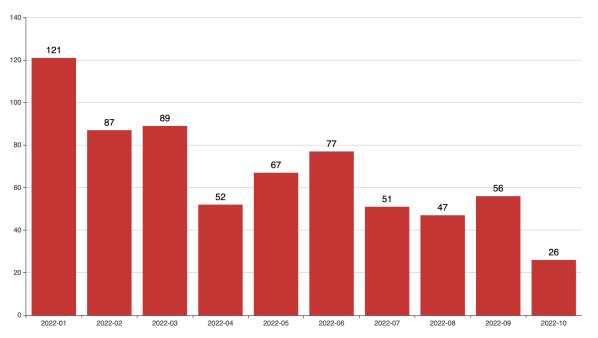 In October 2022, a total of 26 collective actions were recorded in CLB’s Strike Map, the lowest number per month since the beginning of the pandemic when only nine incidents were collected in February 2020. Last month, the construction industry led with 44 percent of the incidents, followed by services and transport, at 24 and 20 percent, respectively. The education sector accounted for eight percent. Eighty-eight percent of workers’ demands were for wages in arrears. 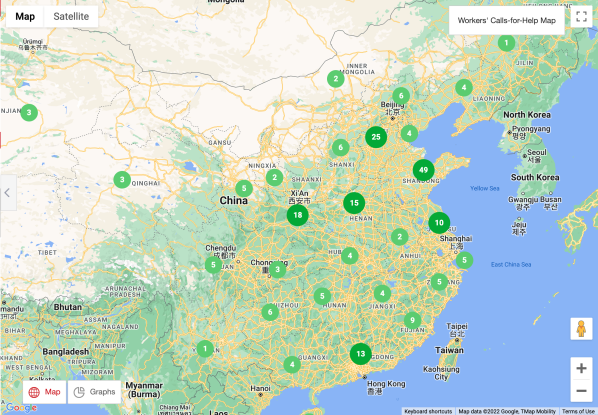 The number of labour grievances collected in CLB’s Workers’ Calls-for-Help map has continued to rise month-on-month, with 220 logged in October 2022. The largest concentration was 49 incidents (22 percent) in Shandong province. The construction industry (43 percent) and the service industry (37 percent) had the largest proportions. Wage arrears accounted for 98 percent of all incidents. About 60 percent of workers sought government intervention to resolve their issues, followed by seeking online help, at 36 percent.

As captured in our map and international headlines, workers spoke out about the crisis that emerged at Foxconn’s largest iPhone factory in Zhengzhou, Henan province. Read CLB’s analysis of workers sounding the alarm and getting ignored by management, and our calls to the municipal trade union.

In addition, the construction industry was affected by the downturn in China’s real estate market, and this was evident in the incidents collected in the map. Workers on properties developed by Country Garden, a Guangdong-based Fortune 500 company with over 200 high-end residential communities, sought wages in Guiyang, Guizhou province; and in Zaozhuang and Qingdao, Shandong province. Sunac, a real estate developer based in Tianjin, owed wages to workers in Shaanxi and Hubei provinces. The economic effects are being felt beyond the construction industry: China Fortune Land Development, which purchased the Hubei Football Club in 2015, failed to pay the Super League players, who turned to the media for assistance. 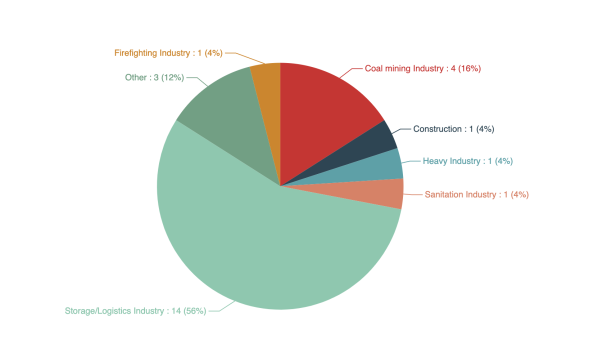 The Workplace Accident Map logged 25 incidents in October 2022. The logistics industry accounted for 56 percent, including seven cases of truck drivers testing positive for Covid-19. Another case involves over 100 railroad workers contracting Covid-19. One truck driver died suddenly while in quarantine.

Our maps are free and publicly available on our website. Feel free to explore our databases and discover patterns and trends for yourself. You can contact us at clbeditor@clb.org.hk