After two months dominated by wage arrears cases, worker protests in China are featuring demands for higher pay again as the economy begins to improve and the cost of living increases.

Against this background, China Labour Bulletin recorded 45 collective protests on our strike map in December, including 16 wage arrears protests and nine demands for pay increases. There were 22 strikes in the manufacturing sector, ten in the service sector and just two disputes in construction. 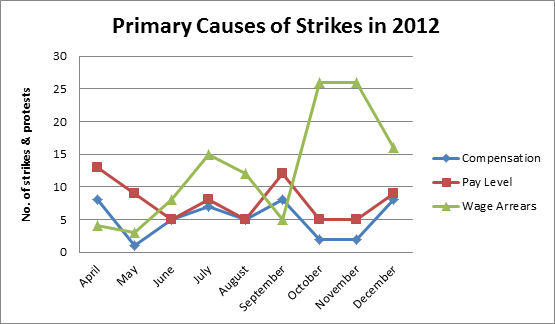 Strikes and collective protests occurred across all types of enterprise, with ten strikes in the private sector, seven in state-owned enterprises and six at businesses owned by Hong Kong, Taiwan, Japanese or South Korean companies. Most of the disputes in the state sector were related to wage arrears, although the most significant dispute, at Yanlian Industrial in Shaanxi, focused on management plans to reassign employees as agency workers. This strike led collective bargaining between the two parties and eventually management backed down. 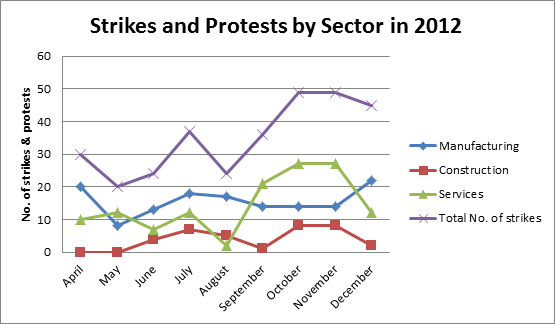 In the service sector, bus and taxi drivers in several provinces staged strikes and protests against unlicensed taxis, plans by local government to repurchase buses and licenses, and pension payments. But the highlight of last month has been the rise of teachers’ strike and protests in China’s coastal regions. Teachers at a Jiangsu kindergarten demanded a pay increase, saying they did not have labour contacts or social insurance and their monthly salary was just 1,400 yuan, fractionally above the local minimum wage of 1,320 yuan per month. The education bureau was reportedly involved in negotiations. In Guangdong, middle school teachers from Zhuhai protested a 30 percent salary deduction, leading to local government intervention and discussions between the school and teachers’ representatives.

Nearly a quarter of the collective disputes recorded by CLB last month led to negotiations between workers and management. However it is still largely dependent on the workers themselves to start the collective bargaining process and persist with it in order to get positive results. In late December, workers at a Japanese owned toy factory in Shenzhen, for example, staged a week-long strike demanding compensation after corporate restructuring. Workers posted open letters to the Shenzhen Federation of Trade Unions soliciting its help and later went to a Shenzhen law firm for advice on how to talk to the bosses but they failed to follow up on these initial approaches.