Dock workers at Shenzhen’s Yantian and Shekou ports both went on strike for higher pay during September. The Yantian strike was resolved relatively quickly in just two days, while the subsequent strike at Shekou lasted ten days and only ended yesterday after a protracted stand-off.

The Shenzhen strikes followed a bitter 40-day strike by 500 dock workers in neighbouring Hong Kong. That strike ended on 6 May after the workers voted to accept an offer of a 9.8 percent pay increase and improved working conditions. The strikers had originally demanded a 20 percent pay increase to make up for more than a decade of pay stagnation.

Years of pay inertia was the primary reason for the Shenzhen strikes too. On the morning of 1 September, several hundred crane operators and loaders at Yantian International Container Terminals went out on strike complaining of low pay and strenuous working conditions. Most crane operators earned on average just 6,000 yuan per month, although this could go up to 8,000 yuan per month in busy periods.

The local government quickly intervened and brokered a deal in which workers got an extra 600 yuan to 700 yuan per month in benefits and subsidies. Their basic wage however remained the same. Although the workers agreed to end the strike, several dockers told CLB that they did not see it as a victory.

On 17 September about 400 stevedores at the Shekou port run by China Merchants Port Services also went out on strike. They earned on average just 1,600 yuan and demanded a pay increase of around 800 to 1,000 yuan per month, according to Lloyd's List reporter Jing Yang who talked with the strikers in Shekou. 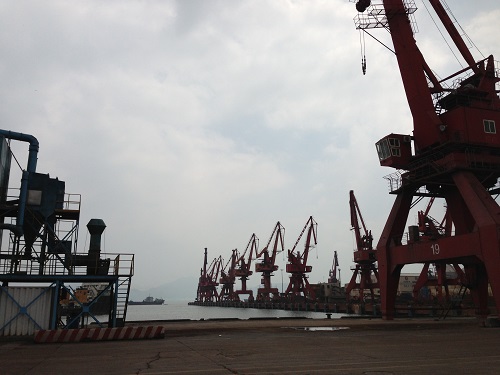 After management refused to accept the workers’ demands, the workers selected 11 representatives to press their case at the district labour department as well as holding direct talks with management. However there was little substantial progress because the gap between the two sides was too big, with management reportedly offering only a 500 yuan per month increase.

Today however, a China Merchants Port Services spokesman told CLB that the strike was resolved on 26 September and that all employees were working normally. He refused to provide any more details but it is assumed the workers accepted the 500 yuan offer.

Shenzhen-based labour relations expert Duan Yi noted that the failure of the container ports in Shenzhen to establish a long-term collective bargaining system after the widespread strikes at the city’s ports in 2007 meant that dock workers’ grievances over pay and conditions had never been properly addressed and as such the dockers had no option but to go out on strike every time they wanted to get anything done.