A building collapse in the central Chinese province of Henan on 30 October killed at least 17 construction workers and injured another 23, many seriously. It was the latest in a string of incidents in China’s notoriously dangerous construction industry.

The official Chinese media has reported on at least 160 major accidents on construction sites so far this year, the majority of them (54 percent) involving some kind of structural or mechanical failure. See CLB’s Work Accident Map for more details.

In the Henan incident, a group of largely elderly rural migrant workers from Nanyang had been recruited to renovate a residential building in the neighbouring county of Wuyang. They were told to use a jack to raise one corner of the building but, as 65-year-old Feng Guoqing told China Central Television, the majority of workers had no training prior to embarking on the project.

Feng told CCTV; “We just figured the job out as we went along” (后来跟着跟着干就会了). The workers were paid just 150 yuan per day, he added.

The workers were reportedly given just a few days to complete the renovation work. The time pressure, combined with a lack of proper training, almost certainly contributed to the accident. 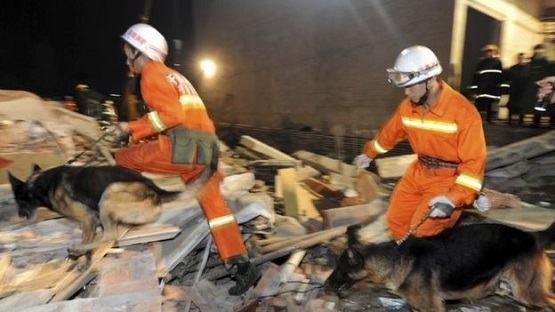 Firefighters search for survivors in the collapsed building in Beiwudu, Wuyang county, Henan

The use of poor quality construction materials, minimal worker training, the lack of basic safety measures and poor project management have all played a part in construction site accidents in China.

Another common theme in the media reports of construction industry accidents is the number of elderly workers involved. For example, a 60-year-old worker fell to his death while placing ceiling tiles on a residential home in Wuhan on 5 October, while on 6 September, a 50-year-old worker was killed by a falling crane counterweight on a construction site in Changsha.

As CLB reported in March this year, the poor pay and hazardous working conditions of the construction industry has meant it has been struggling to attract younger workers for several years now. In many construction projects, the majority of workers are reportedly over 50-years-old. Most do not have any medical or work-related injury insurance, and if they are badly injured at work, it could mean the end of their working career because they would not be able to afford proper rehabilitation care.