Sanitation workers in Guangzhou have taken collective action to curtail the use of agency labour in the industry and force their district’s new contractor to sign employment contracts directly with them.

On 2 November, about 40 sanitation workers based in the Shatou district of southern Guangzhou formally dissolved their contracts with their employment agency, obtained severance pay based on their years of service, and signed new contracts with the district’s new cleaning contractor. 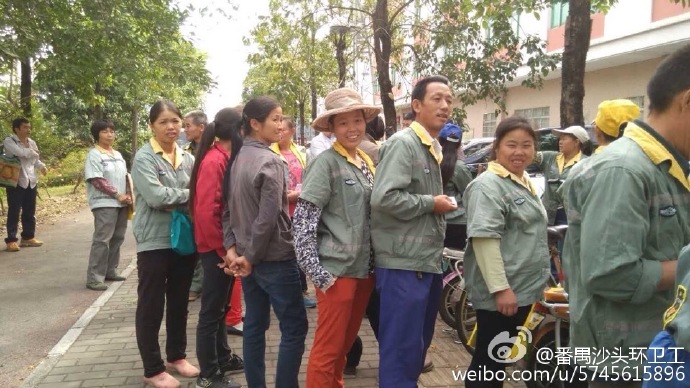 Shatou sanitation workers line up on the morning of 2 November to collect their severance pay.

This was the latest in a series of successful collective actions by Guangzhou’s sanitation workers who, with the help of local labour groups, have become increasingly well organized and determined to stand up for their rights.

The Shatou dispute began in early October when the sanitation workers’ employer suddenly announced that the employees would have to resign their current positions and start work the following month in another district about ten kilometres away.

On 21 October, the workers’ representatives informed the company and the local government that the workers would not voluntarily resign and that the company was legally required to pay them compensation for the termination of their contracts.

When the company did not respond, the workers decided to take collective action. On the morning of 27 October, they gathered at the entrance to the Shatou refuse collection station chanting “no more agency labour, give us our severance pay” and “we love Shatou, we want to work here.” See photo below. 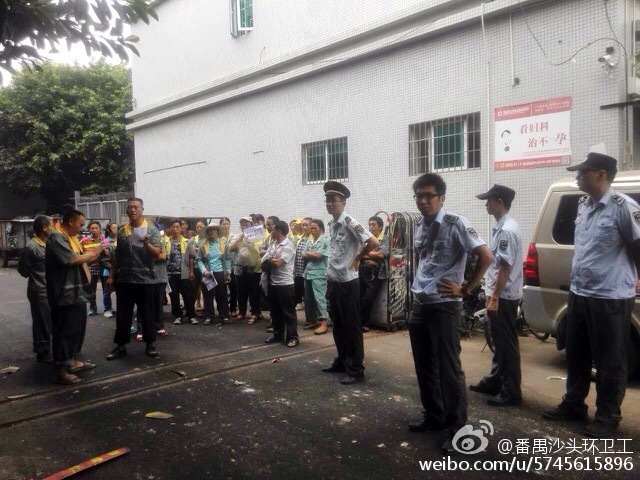 This protest was publicised on social media and immediately got the attention of the local authorities who organized talks the following day with the workers’ elected representatives and representatives of the employers. On the morning of 28 October, about 30 of the workers gathered outside the meeting room in gesture of solidarity with their representatives.

During the bargaining session, the employers repeated their demand that the workers relocate to another district without any compensation. The worker representatives resolutely rejected this demand. The local officials present at the meeting were sympathetic to the workers’ position and in the afternoon they announced that the new local contractor, Qiaoyin Co. would take on all the existing Shatou workers.

After further discussion, the representatives reached a preliminary agreement to terminate the workers’ existing contracts and pay compensation of one month’s salary for every year of service, based on actual take home pay. Under the agreement, more than six months service would be calculated as one full year, and less than six months would be calculated as half a year.

The deal was accepted by the workers who then agreed to return to work. However, the employer then threw a spanner in the works by unilaterally announcing the terms and conditions of the settlement rather than jointly signing a formal agreement with the workers. This prompted another protest by the workers who demanded that the settlement be jointly signed and based on the negotiated agreement. Eventually, however, the workers did agree to accept the employer’s “announcement.”

On Monday 2 November, the workers collected their severance pay and went to work as normal in Shatou district, just as they had originally demanded, having signed new employment contracts directly with Qiaoyin Co.

As with many other disputes involving sanitation workers in Guangzhou in recent years, the Shatou workers received widespread support from co-workers across the city as well as ordinary members of the public. This public support, largely generated through a well-coordinated social media campaign, was instrumental in bringing pressure to bear on the employers and the local government to reach an agreement.