CLB Report: A union at the frontline of collective bargaining in India

In a report released on International Labour Day, CLB documents the evolution of a grassroots union in Bangalore, India, to illustrate effective organising practices that can be adapted to other geographies and industries to take back workers’ collective power and to even spark changes along global supply chains.

International solidarity is not merely a slogan in our globalised world economy of intertwined supply chains. With this report, we document the experience of one union in India to serve as a replicable model for workers anywhere and everywhere to start organising in the face of unprecedented challenges. 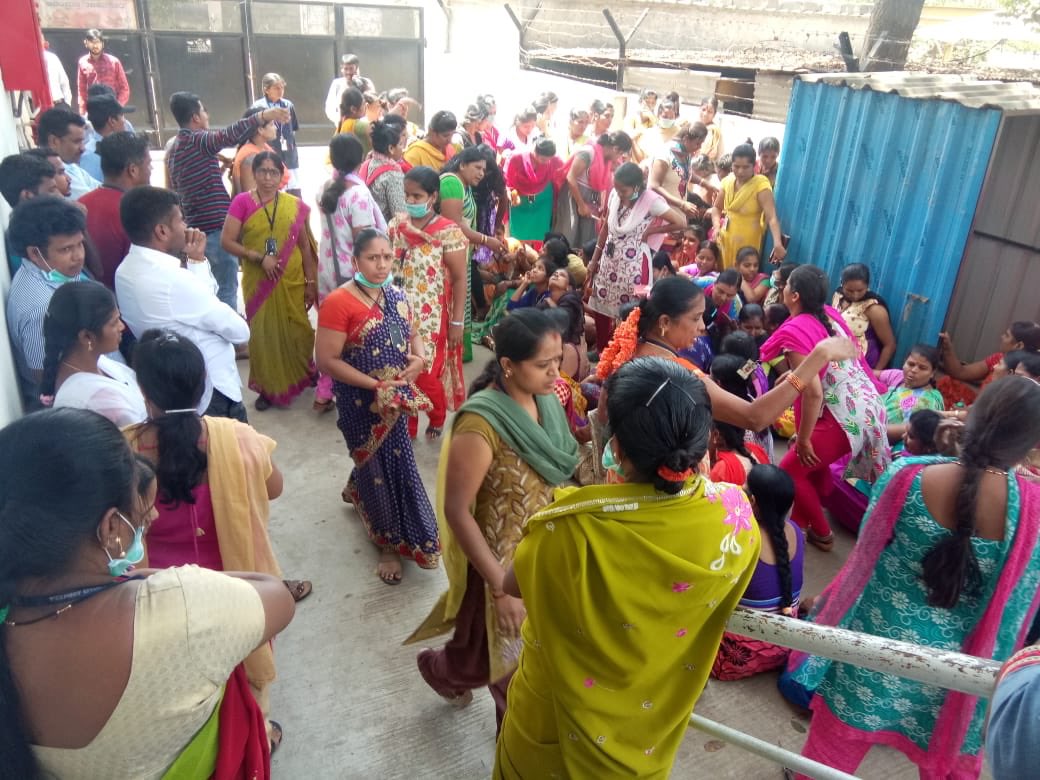 Texport Apparels workers walk out of the factory on 13 March 2019 in protest against an assault on the factory floor. Photograph: KOOGU

The report presents the story of the Karnataka Garment Workers’ Union (KOOGU) and their organising efforts at several factories in and around Bangalore. The collective bargaining process starts with organising on the factory floor.

As one union organiser, Soumya, said:

I have also been a garment worker. I know that we wear blinkers to work like horses, never looking left or right to observe what’s going on around us. Most workers don’t even know the names of any of the management personnel. They go to work, get screamed at by supervisors to finish their targets and rush home. It is important for workers to know basic things like how many workers work in the factory, how many toilets and water coolers are there in each floor, the location of the first-aid room, creche and the HR managers cabins.

Researched by Ganga Sekar, a former coordinator at Foundation for Educational Innovations in Asia (FEDINA) and who was involved training activities with KOOGU, the report presents two cases studies that tell the story of workers standing up to widespread gender-based and caste-based discrimination and harassment, organising in their workplaces to present collective demands for safe drinking water and reliable transportation to and from work, and signing agreements with factory management that guarantee respect of workers’ rights.

But the story does not end with the success of signing MoUs. Collective bargaining is an ongoing process, and having worker-led mechanisms in place before crises arise - such as the global pandemic - is essential to challenging the affronts to workers’ lives and livelihoods that are occurring with remarkable similarity all over the globe.

Tayamma, now a union organiser, described how far workers had come from the workplace culture of fear to one of empowerment:

Before Nagarathna introduced me to the union, I only knew how to cry. I never dared to speak in front of the management. With every meeting I attended, I learnt to speak up and today I don’t keep quiet about any injustice to workers in my factory.

Overcoming workers’ fear and often angry frustration at seemingly insurmountable challenges was only the first step. KOOGU went through an institutional overhaul so that the work was led by workers at the factory level, and that started with increasing the capacity of worker representatives to conduct consultations at the workplace and initiate the collective bargaining process with factory management.

Mahesh, a garment worker in Bangalore who led his factory’s worker committee before being elected to be KOOGU’s Organising Secretary of the Central Executive Committee, recalls that he did not know the term “collective bargaining” as a worker.

Before attending the [union] meeting, we had not thought that there were possibilities for us to resolve workplace issues through dialogue and that the right to organise within the factory was backed by labour laws.

In the report’s first case study, an MoU was signed in 2018 between KOOGU and Shahi Exports, one of India’s major garment exporters that employs over 60,000 workers in the state of Karnataka, and over 100,000 workers in more than 60 production units spread across India. Workers organised and drafted a list of demands. When they presented the list to management, the response was a violent attack on the worker representatives. Instead of succumbing to the intended effect of scaring workers away from the union, workers instead rallied around this attack, got the attention of the media and international brands, and succeeded in management recognising the union as legitimate and agreeing in the MoU to hold regular collective bargaining meetings.

The second case study tells the story of the MoU that was signed in 2019 between KOOGU and Texport Apparels, a Bangalore-based garment firm that employs over 700 workers and supplies several international brands. The origin of this MoU is different from the story of Shahi Unit 8. There was no union presence at Texport when a group of male managers physically attacked a woman worker on the factory floor. Because of a repeated pattern of verbal abuse and sexual harassment at this factory, the incident sparked a walk-out of a quarter of the factory’s workers, and they protested outside the factory gates for several days. The Texport workers had heard of the organising efforts at Shahi Unit 8 and other factories in the vicinity, so they called on KOOGU for aid. KOOGU applied the lessons learned from the Shahi Unit 8 experience and helped the workers to raise international attention, lodge official complaints through various channels, and gain management recognition of their newly-formed union that saw democratic elections after the signing of an MoU containing a provision recognising the workers the right to organise.

In both of these cases, workers and the union were supported by a host of actors, including organisations that have long worked in the garment sector in India and in the region, and that have strong research experience, advocacy experience, and the power to get the attention of international brands.

In fact, the international brands - as main accumulators of profit in the global supply chain - are a major stakeholder and have an inescapable role to play in the process of workers collectively bargaining at the factory level. Brands supplying from India and other Global South jurisdictions must do more to implement their corporate social responsibilities, especially when the workers who produce the garments they sell globally come knocking on their doors.

The pandemic has shown the true nature of supply chains, leaving workers at the source to bear the brunt. In ongoing dialogue at Shahi Unit 8, management was upfront that pricing is set by the brands such that the factory has little control over workers’ wages. Rather than allowing this to become a deadlock, this union at the frontline of the global supply chain argued that it is in the mutual interest of workers and management for a fair pricing model. So KOOGU called the brands to the bargaining table. Some replied to the invitation, but none so far have agreed to join the negotiations.

The collective bargaining process is never an easy one, in fact it is often difficult and heartbreaking along the way. But by uniting and refusing to stay silent in the face of unacceptable conditions, workers can stand together and, step by step, work toward lasting change.