The average contribution rates for work-related injury insurance will be reduced from 1.0 percent to 0.75 percent, and the maximum rate for maternity insurance will fall from 1.0 percent to 0.5 percent, a move which, the State Council said, should save China’s enterprises around 27 billion yuan a year. The precise contribution rates for the funds will vary according to industry and region.

It is important to note however that these three insurance funds combined only account for about seven percent of China’s social insurance revenue. By far the largest and most important funds are those for pensions (70 percent) and medical insurance (23 percent). See chart below. 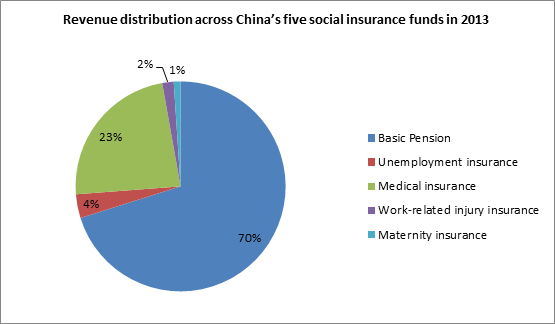 The government has yet to announce changes to the contribution rates for these major funds; however, it seems inevitable that some adjustment will have to be made in the next few years as the government seeks to broaden social insurance coverage. Even though social insurance contributions are mandated by law, currently only about one third of the workforce in China has a basic pension; and the coverage rate for rural migrant workers is even lower. See CLB’s background article on China’s social security system for more details.

A significant reduction in pension contribution rates would almost certainly have to be accompanied by an increase in the statutory retirement age, currently 60-years-old for men, 50-years-old for women workers and 55 for women civil servants. With a rapidly aging population, more and more regions will start to suffer serious shortfalls in their pension funds unless a greater number of employees contribute to the fund over a longer period of time.

The extent and speed of reform of the social security system will be determined however by the provincial and local governments that control the various social insurance funds. Each region sets its own contribution rates (within central government guidelines) and local governments can be (and often are) flexible in the extent to which they enforce those rates.

Another key factor however will be China’s workers. Increasing numbers of workers are now demanding that their employers make the legally mandated social insurance contributions they have ignored for years or even decades on end.  The Lide shoe factory dispute in Guangzhou this year, as well as the massive Yue Yuen strike in Dongguan last year, were examples of how an ageing workforce is now beginning to prioritise social insurance in their demands for a better deal from management.