Faced with long hours, intense work pressure, low pay, high living costs and insecure employment, many express delivery workers, the vast majority of who are young male migrant workers, are choosing to stay at home after the New Year holiday rather than go back to the cities.

Many delivery stations in major cities Beijing, Shanghai, Chengdu etc. have been struggling to find enough staff, and local governments have launched recruitment drives to lure workers back. 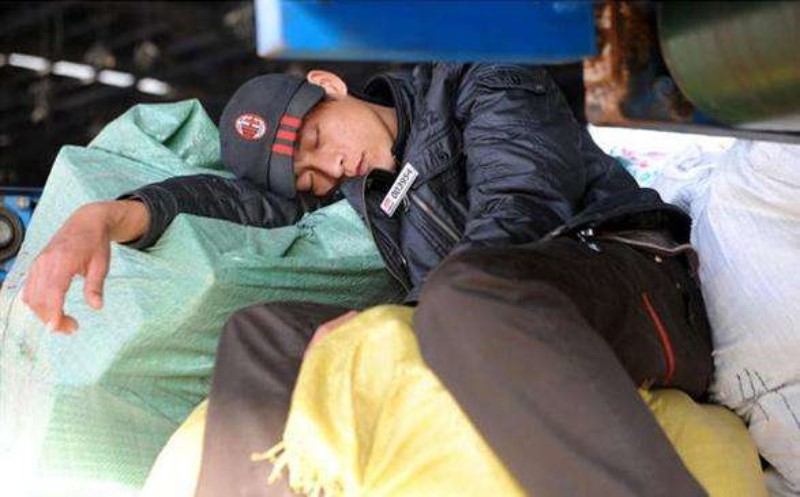 An exhausted courier grabs some sleep while he can

Many express delivery companies began their own recruitment efforts prior to the holiday, proposing competitive “monthly salaries ranging from 4,300 yuan to 15,000 yuan, during peak seasons.”

Like the factory owners before them who struggled to retain workers after the New Year a decade ago, some delivery companies helped couriers buy return rail tickets for the holiday and provided bonuses for introducing new  workers to the company as a way of getting them to stay.

Unlike factory owners however, very few delivery companies can actually guarantee a secure job with proper benefits to workers and thus have a much more difficult time ensuring that their workers return. Even S.F.Express and e-commerce giant JD.com only hire a certain percentage of couriers on formal contacts with pensions, medical insurance and other benefits such as company vehicles.

Most express delivery companies hire staff from labour agencies or rely on temporary workers during peak periods such as Singles Day in November. Another common practice is to establish franchises as a means of expanding coverage in smaller cities. These franchises may be just one person or that that person may hire their own workers, again on a very precarious basis.

Most couriers are essentially independent contractors, responsible for collecting and delivering packages in a specified area. They are restrained by tough regulations on delivery times: Deliveries inside a city should be within 24 hours, deliveries in different domestic cities should be within 72 hours, and penalties are applied for failure to deliver on time. Contractors are only paid by the package and have no labour contract or social insurance from the company.

In 2017, China’s courier business volume increased by 28 percent to exceed more than 40 billion packages for the whole year. Revenue also grew by 24.4 percent to reach 495 billion yuan. The workers however never shared in the benefits. As a result, many young couriers have no sense of loyalty to the business and will quit as soon as better opportunities arise. The industry may eventually to move to drones to ensure deliveries but in the meantime, it will have to rely on its under-paid army of around two million young migrant workers.

Unless the industry improves pay and working conditions for its couriers however and gives them proper contracts and secure employment, it will continue to face labour shortages in the future.