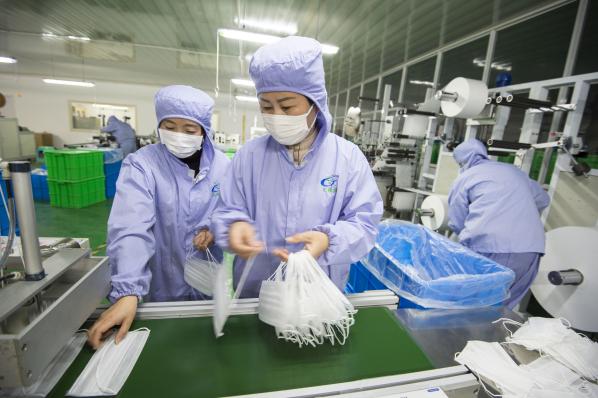 As we reported in last month’s newsletter, the demand for face masks in China dropped off dramatically once the coronavirus outbreak was determined to be brought under control, leading to mass layoffs and wage arrears at unprofitable factories.

However, as the pandemic continues to spread across the globe, international demand for face masks and other personal protective equipment continues to grow. This has led to lucrative contracts for large-scale Chinese manufacturers with export capabilities. In late July, for example, electric vehicle manufacturer BYD secured a US$316 million contract to supply 420 million facemasks (300 million surgical masks and 120 million N95 masks) to California, one of the worst-hit regions in the United States.

BYD started mask production in January, and by May already had the capacity to produce more than 50 million units per day. The quick shift in production away from the slumping electric vehicle industry is expected to generate huge profits for the company. As social media reports from employees at BYD show, however, it is the workers who are paying the price for this accelerated production.

A 18 July post on the WeChat public account New Worker No.51 (新工号51), revealed in graphic detail how one young worker at the BYD Electronics Co., Ltd., plant in Changsha lost his hand while trying to retrieve a jammed mask from a machine that had suddenly stopped.

Moreover, it was alleged that three other workers at the plant had died suddenly in the three months since it had switched to mask production. The article highlighted the intense working environment at the plant and lack of training, which led to employee exhaustion and a spate of accidents, plus frequent conflicts between workers and security guards.

The BYD factory, located in Changsha’s Wangcheng Economic and Technological Development Zone, reportedly employs between 5,000-6,000 workers in mask production, plus another 3,000-4000 workers in a mobile phone assembly plant. One worker explained:

"Workers in the mobile phone workshop have only one day off every two weeks, and work 10.5 hour shifts each day... but it is far less scary than in the mask workshop. From the time the mask workshop started production in March until mid-June, the workers there only had one day off. They work from 8 am to 8 pm every day, and there is only one hour for lunch. In addition, they must wear dust-proof overalls all the time they are in the factory. After three months of continuous work, everyone is feeling really bad."

Despite the excessively long hours and high-pressure working environment, employees in the mobile phone plant can only earn between 4,000 and 5,000 yuan per month, while workers in the mask factory can, with a productivity bonus, earn up to 6,000 yuan (US$860) per month. Many workers were recruited after being laid off from previous jobs during the nationwide lockdown in China and were desperate to find work, no matter how bad the pay and working conditions were.

The standard work week in China is 40 hours, with a maximum of 36 hours overtime per month. If these reports are accurate, employees in the mask factory are working far in excess of the legal maximum. But when we called the local trade union in Wangcheng district to enquire about conditions at the factory, officials told CLB they were unaware of any violations of labour law.

The local trade union officials were aware of the accident in which a worker lost his hand and had taken part in the post-accident investigation. It was clear, however, that prior to the accident, neither the enterprise union at the factory nor the local district union officials had done anything to ensure safe working conditions at the factory or even make sure the company was in compliance with China’s basic labour laws.