The global coronavirus pandemic has presented huge challenges to governments and public institutions around the world in terms of public health protection, economic stability and employment protection. How has the All-China Federation of Trade Unions (ACFTU) measured up so far?

As part of our ongoing investigation into the ACFTU’s reform initiative, China Labour Bulletin staff conducted a series of interviews with trade union officials in six cities across China during February and March. We wanted to gauge their response to the crisis and understand what steps they had taken to protect workers’ health, economic interests and legal rights.

The results were published yesterday, 31 March, in a report on our Chinese website entitled 工会改革观察与促进第九期 建筑业与新冠病毒.  The report includes six cases of construction worker wage arrears; however, since we have covered the wage arrears issue extensively elsewhere, this article will only focus on the six coronavirus (Covid-19) cases, namely:

·       The provision of facemasks for sanitation workers in Guangzhou.

·       The provision of facemasks for sanitation workers in Beijing.

·       Student interns forced to work at Shenzhen factory during the Covid-19 outbreak.

·       Unequal subsidies for medical staff at Ankang Hospital in Shaanxi.

The local trade union officials we talked to were too often only dimly aware of these incidents and had little understanding of the real problems faced by workers in their district. Initially, there was an almost complete lack of initiative on the part of local trade unions who were largely dependent on their superiors and the local government for guidance on how to proceed and what action to take during the Covid-19 outbreak. Later, however, some local trade unions did take some tentative steps to address workers’ needs.

Several officials told us that it was only proper that the local government take the lead in combating the epidemic and that lower-level trade union officials should simply follow instructions. In many cases however, the instructions given were for union officials to work under the leadership of the local epidemic prevention team in residential districts, checking temperatures, registering names for community officials, making reports etc.

The officials basically dropped the ball when it came to what should be the core mission of a union, organizing workers and negotiating with employers to ensure employees are adequately protected.

When a sales representative at a watch counter at the Ginza Shopping Mall in Jinan was infected with Covid-19 on 4 February, for example, local trade union officials simply stood by. They did not investigate the situation or seek to understand how other staff at the mall were being treated. 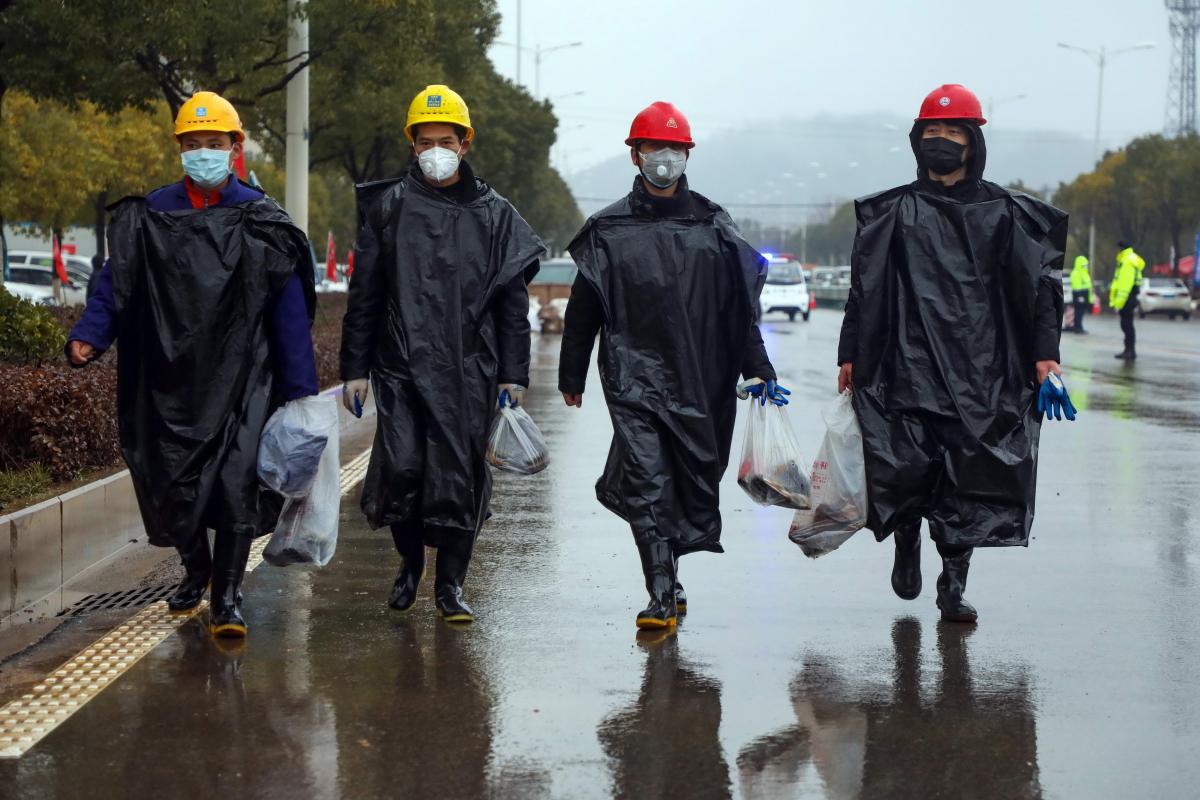 Officials were reluctant to go into factories or other workplaces that had resumed operations to assess the health risks faced by workers, arguing that all decisions on the resumption of work had to come from the local government.

Their attitude and responses contrasted markedly with several civil society activists and students in Guangdong who immediately took the initiative to procure face masks and make sure that sanitation workers had adequate supplies of protective equipment if their employers failed to provide it.

After our discussion with officials in Guangzhou, however, the chair of the sanitation industry union, Liang Xiaoling, said in an interview with Southern Workers Daily that sanitation workers in the city’s Liwan district were now receiving at least one mask per day. And in the Ankang hospital case where there had been numerous complaints by medical staff over working hours and subsidy payments for frontline workers, the union officials were amenable to our suggestions, and issued detailed reports on their website regarding the subsidy issue.

In Chongqing, where the Panzhihua titanium plant potentially exposed 131 workers to Covid-19 when it hastily reopened in mid-February, district trade union officials initially said there was little they could do. Subsequently, however, the Chongqing Municipal Federation of Trade Unions helped draft a “working guide” that advocated the use of a tripartite negotiation system involving the municipal union, employers and the government, that would not only help ensure work safety in enterprises but also mitigate labour disputes related to layoffs, remuneration, social insurance, working hours etc. resulting from the Covid-19 crisis.

While the working guide should in principle help prevent a second wave of infections as businesses resume full operations, there is still a lot more that unions in Chongqing and those in all Chinese cities can do to protect workers better. In this regard, the report had seven recommendations on the concrete steps local and enterprise unions could take:

1.       Local unions need to establish regular communication channels to share information on the epidemic with enterprise unions. The local union’s work should be open and transparent and allow all workers to obtain up-to-date information on the return to work situation. At the same time, workers should be able to alert the union to any problems regarding Covid-19 control measures at their workplace.

2.       Local unions should monitor all enterprises that have resumed operations and discuss with enterprise unions how best to supervise epidemic prevention efforts.

3.       For workers who are unable to return to work, those in quarantine and those infected by Covid-19, the local union should negotiate compensation packages with their employer and the local government.

4.       Local unions should encourage enterprise union representatives to develop feasible work plans for the resumption of work and epidemic prevention in their own enterprise.

5.       Enterprise trade unions should represent employees in tripartite negotiations with the employer and local government on how best to manage the costs involved for all parties in the safe resumption of operations.

6.       Once operations have resumed, enterprise trade unions should take responsibility for ensuring occupational safety and health at the worksite. If the enterprise cannot guarantee work safety, the trade union should immediately step in and remedy the situation. The union should maintain regular communication with employees to make sure they are fully aware of, and comply with, epidemic control measures.

7.       If any employees are infected with Covid-19, the enterprise union should act immediately and negotiate with management to implement measures that will minimise the risk to other employees.

In conclusion, the report noted the importance of workers themselves taking the initiative and demanding better representation from both their enterprise and local unions. The impact of the Covid-19 epidemic on workers’ health, economic interests and fundamental labour rights will last for many more months, even years; China’s trade unions must be there to protect and fight for their members’ interests.

The report pointed out that if the government had not cracked down on civil society groups such as the Panyu Migrant Workers Service Centre in 2015, these vastly experienced and capable labour organizations would have actively gone into workplaces to organize workers and pressurise employers and local governments to ensure that workers were properly protected. With these groups almost entirely out of the picture, however, it now falls on the official trade union to step into the breach.