China’s teachers follow their American colleagues out on strike

While teachers in the United States have been making headlines with a series of ground-breaking strikes across the country, education workers in China have also been taking collective action over a wide range of issues from low pay, pensions, bonus payments and wages in arrears.

Of the 135 incidents recorded on CLB’s Strike Map in April, a total of 14, or nine percent, involved education workers, a remarkable statistic given that teachers only make up about two percent of the national workforce in China.

As we pointed out in our 2016 report, Over-worked and under-paid: The long-running battle of China’s teachers for decent work, teachers have long-standing grievances that local governments across the country have consistently failed to address, leaving them no option but to stage strikes and protests in order to get their voices heard.

Last month saw retired community teachers take to the streets again to demand proper pensions, three separate protests by school teachers in Xi’an over the payment of performance bonuses, and several strikes in kindergartens and other privately-run education institutions over low pay and wage arrears. See below for details of two specific cases. 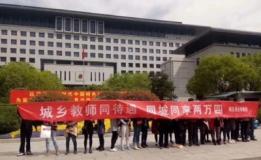 Dozens of teachers from Zhouzhi county gathered in front of the Xi’an government building on 15 April demanding payment of their performance bonus. The teachers’ demands dated back to 2016, when the municipal government decided to pay its civil servants a performance bonus of 36,000 yuan.

The performance bonus that was paid to teachers was much lower and varied from district to district. While some teachers received a maximum of 24,000 yuan, others only got a few thousand, and a few got nothing at all. The Zhouzhi teachers demanded a 24,000-yuan bonus across the board, saying teachers in urban and rural districts should be treated equally.

Teachers from two other districts in Xi’an had staged protests over the same issue earlier in the month. In less developed areas of China, teachers only earn around 3,000-5,000 yuan per month and as such the payment of their annual performance bonus is crucial as the cost of living rises. 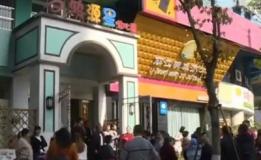 A kindergarten in Dazhou, Sichuan closed down on 11 April when all of the teachers refused to work in a protest over wage arrears. Parents were unaware of the strike action and turned up as usual with their children to find just one intern in charge of the whole school.

The parents demanded that the teachers return to work immediately but also urged the school to make more efforts to retain staff, noting that there had been a very high staff turnover before the strike. Parents expressed concern that the constant disruption of staff coming and going would affect their children’s results just as some of them were preparing to enter primary school.

Some of the teachers did reportedly go back to work after the school principal called them. Government officials arrived at the scene and tried to negotiate between the two sides and, according to local media, the dispute was settled within the day.