The veteran labour lawyer and advocate for collective bargaining Duan Yi has called on China’s labour groups to work together to better serve the interests of China’s workers.

In a speech to workers and labour activists in Guangdong earlier this month, Duan discussed the evolution of the workers’ movement in China and the role of civil society labour organizations in that movement. He argued that it was the workers who set the agenda and that it was therefore up to China’s labour groups to follow that agenda. The various, predominately small-scale, labour organizations in Guangdong needed to be better coordinated, he said, in order to counteract the current imbalance of power in labour relations, which was weighted heavily in favour of the employer.

In the future, he said, labour groups would also have to find some way of cooperating with local governments, whose primary concern in labour disputes at present is the maintenance of social stability. Duan Yi also touched on the thorny issue of foreign funding for Chinese civil society organizations. He argued that labour groups should accept the funding on offer but only on condition that their primary allegiance to China’s workers is not weakened or compromised as a result.

CLB has translated the text of Duan Yi’s speech below. In the Chinese text Duan Yi refers to labour groups as 劳工NGO. For the sake of consistency, we have translated this as “labour NGO,” although it should be noted that not all these groups are non-governmental organizations in the sense that many are not registered as NGOs with the local government. In essence, they perform the role that the trade union should play in China, namely supporting workers in collective disputes with management.

A discussion of working strategies and the transformation of labour NGOs 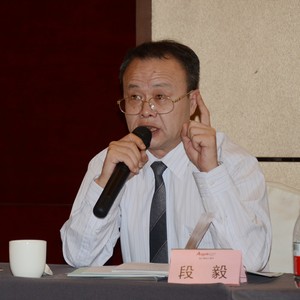 Duan Yi. Director of the Laowei Law Firm in Shenzhen

The transformation of labour NGOs in China

Since their emergence in the 1990s, China's labour NGOs have undergone considerable growth and transformation. The first labour NGOs simply provided workers with cultural, health and other services. With the publication of the draft Labour Contract Law in the mid-2000s, workers discovered that they could realize their rights by fighting to uphold them. That gave rise to rights-oriented NGOs that provided advocacy services, helping workers defend themselves when their interests had been harmed. They helped workers complete legal documents, provided legal advice or acted as their representative in legal proceedings.

The implementation of the Labour Contract Law in 2008 raised the rights awareness of workers, and increased the participation of the general public in legislative discussions and the use of law to protect rights and interests. The fact that workers now have demands for higher wages, better benefits and a safe work environment shows that they are not merely concerned with remuneration but are confident in fighting for their fundamental dignity. These changes in workers' demands have led to an increase in the number of collective labour disputes, which in turn has given rise to a new form of labour movement-oriented NGO. We can see that the changing nature of workers' demands determines the nature and role of labour NGOs, and that it is the workers’ demands that determine the degree of NGO involvement.

Comparatively speaking, service-oriented and rights-oriented NGOs lack “vitality” when seen from the perspective of societal needs. Defending one’s rights generally refers to “defending one’s rights according to the law,” which involves simply claiming one's rights. This however actually requires a great investment in the study of law. The average labour NGO cannot possibly accomplish this study in a systematic way, while those that can master these issues will not choose to be an NGO.

The difficulty is that the new demands of workers are not always compatible with existing institutions in China and thus labour NGOs can come under pressure from the authorities. Labour NGOs also face barriers to funding. Domestic sources are virtually non-existent, and the majority of funding comes from abroad. Here we find another contradiction: those outside will always be seen as foreign entities, influencing collective bargaining. They are seen as foreign hostile forces of infiltration, and labour NGOs are seen as their tools. Is this the way things really are? How do we resolve this? We need to emphasize that the defining feature of labour movement-oriented NGOs is their individual character, a character shaped by and defined by the workers themselves. The driving force behind the transformation and development of labour NGOs is precisely the changing demands of workers.

Regarding the question of whether or not we should take foreign funds. My suggestion is “take it if it is there,” but what I accept is money, not assignments. It must be stressed that money should follow the tasks needed, rather than tasks following the money. We need to solve the problems raised by workers; only in this way does our work have vitality, and only in this way will we be accepted by workers. If we give workers pre-set objectives – that is, “what I want to do” and not “what workers want to do” – the workers will not go along with us.

In the majority of collective conflicts today, the unorganized power of the workers is up against the more organized power of employers, and the lack of common strategies among workers is up against the coherent plans and strategies of the employers. This leads to disorder in the wake of conflict, and makes mediation difficult. The success of the Citizen Watch Factory negotiations back in 2011 was based on the workers' early and comprehensive organization. The success of the 2014 Lide shoe factory negotiation model was the long-term organization of workers.

The recent collective conflicts caused by mass factory closures have occurred after the short-notice or sudden closure of the company, which left the workers unprepared for large-scale collective action. The subsequent closure of the Citizen Watch factory occurred suddenly just before the Spring Festival, with management seeking to take advantage of the workers' desire to hurry back to their home towns. What the workers lacked in this case was time. As we can see, collective bargaining that takes place at the end of the year is very unfavourable for the workers in terms of timing. Likewise, in terms enterprise size, the value and long-term institutional impact of collective bargaining in a small-scale enterprise is obviously limited.

Labour NGOs should have clear values, and seek to ensure that labour relations in an enterprise are orderly, regulated and sustainable. Orderly means the employment relations within the enterprise are orderly; regulated means mediated and managed by the relevant institutions; sustainable means that internal order and external regulation can continue to play a role over the long-term.

The need for cooperation

Because of their particular mode of operation, it is difficult to cooperate with service-oriented labour NGOs. Labour movement-oriented NGOs on the other hand have an inherent need for cooperation, and this leads them to work together. Service-oriented labour NGOs can grow to be very large but labour movement-oriented NGOs, under the current political system, have no way of becoming large, and some are actually becoming smaller. Because of the specific nature of their work, labour movement-oriented NGOs tend to gather together, support one another, and raise their collective voice. There have already been attempts by labour NGOs to work together during the large number of collective labour disputes that occurred last year. As a result we have been able to improve our organization so that it can stand up to the stronger organization of the employer.

We need to discuss further the division of labour when several NGOs become involved in the same case. Collective bargaining is a multi-faceted undertaking with different people working on different tasks: some working to articulate demands, some doing internal organization, some doing communications and outreach. In terms of skills, all these things have implications for potential cooperation. On this issue, labour NGOs should actively seek to create unity and solidarity, and every organization should actively seek to overcome narrow conservatism and limitations. We should also note that if NGOs create an alliance they risk attracting more attention and more pressure, but NGOs need support, so we need to figure out how tackle this issue of NGO cooperation.

Labour NGOs should increase their cooperation with lawyers. Lawyers are sometimes thought of as having ill intent, but we must learn to work with them. What we are looking for are not die-hard human rights lawyers, and not employment law lawyers, but labour lawyers.

We do not reject the concerns of the various segments of society, but compared to other social movements, the workers’ movement is more structured. For this reason, we must be “autonomous.” In our discussions with other factions, we should adhere to the principle of “the fair and equal distribution of wealth” in the face of their alternative “theories.”

In a great number of cases, we have found that the enterprise union cannot represent workers, the local and regional union federations sometimes fail to adopt the correct position, and the labour inspectorate can collude with the employer. When the authorities in Shenzhen investigated the collective labour dispute at the Artigas factory, for example, they discovered there was no problem with the work of the Laowei Law Firm that had been hired by the by the workers. All the problems were with the employer, who broke the law, and the local union and labour inspectorate that failed to deal with the dispute effectively.

While it might seem that cooperation with the government is becoming increasingly difficult, actually it may become increasingly possible. In the absence of a formal bargaining system, the first step towards resolving or de-escalating a conflict between labour and management is to identify workers’ representatives and create an orderly organization. And this is where labour NGOs have a competitive advantage over the stability maintenance system. Actually, the goals of workers “asserting their rights” and the “maintenance of stability” are not conflict with each other; they are rather two sides of the same coin.

In the future, can we fully display our individuality in a short written report for the government on collective disputes? In dealings with the government, labour NGOs should first put forward their own individual character, their moral character, and then they will be respected by others. Labour NGOs must take the initiative to assert their individuality because we can do what the government cannot do. This raises another question. If labour NGOs are to get involved in the stability maintenance business; how will we actually go about that? We need to explore and build a platform for labour NGOs and the stability maintenance system to somehow work together.

To be clear, the stability maintenance system begins and ends with maintaining stability; they actually cannot do anything else. But the role of labour movement-oriented NGOs is to create “orderly, regulated and sustainable” collective bargaining between labour and management.