Call to end the suppression of labour activists in China

Trade unions and civil society organizations in Hong Kong are demanding the Chinese government immediately halt its suppression of the workers’ movement and release all detained labour activists.

Dozens of workers, students, trade unionists and civil society activists are still in detention, and many have been formally charged, as part of massive crackdown on labour activists across China that began last July with the arrest of workers demanding the establishment of a trade union at the Jasic Technology factory in Shenzhen. 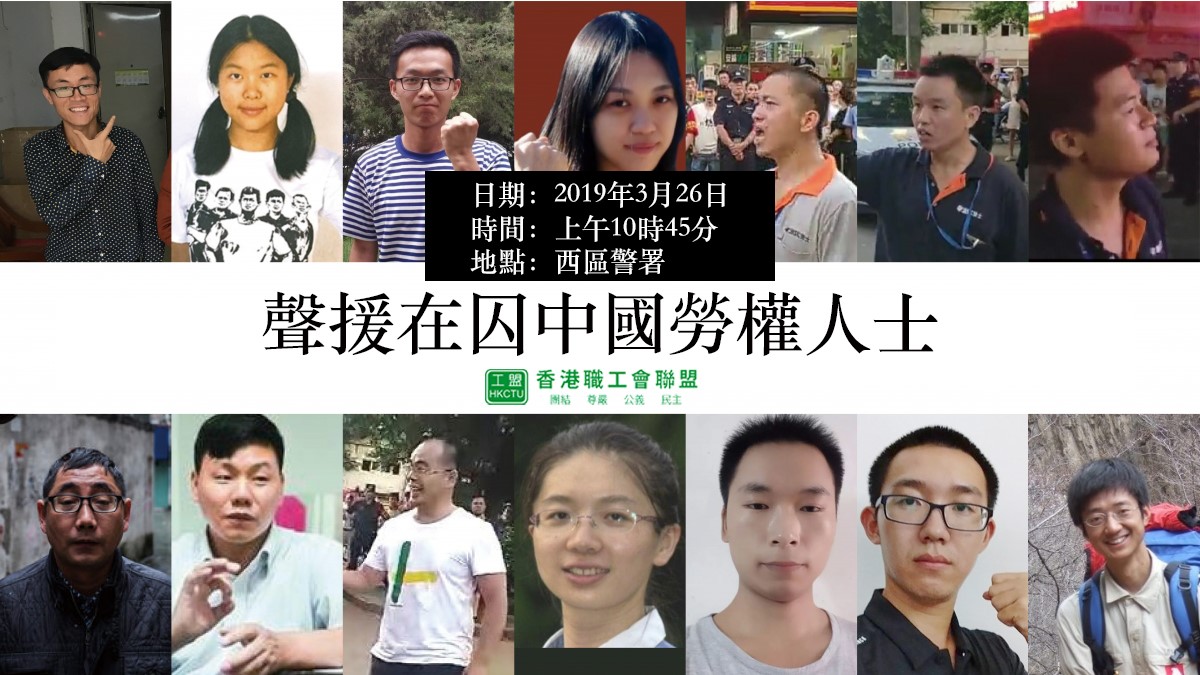 More than 40 workers and their supporters have been detained in relation to the Jasic dispute, most have been denied access to their lawyer and have not been able to see their families. The original Jasic activists, Yu Juncong, Mi Jiuping, Liu Penghua and Li Zhan have been detained for eight months now and are still awaiting trial on charges of “gathering a crowd to disrupt public order” (聚众扰乱社会秩序). Moreover, the student and civil society groups supporting the Jasic workers have been continually harassed by the authorities.

In January this year, five other well-known labour activists were detained in a co-ordinated police action. Zhang Zhiru, Wu Guijun, He Yuancheng, Jian Hui and Song Jiahui are currently being held in a Shenzhen detention centre after being formally charged in February. Only one of the activists has been allowed to see a lawyer and their family members have been harassed.

Citizen journalist Yang Zhengjun, the editor-in-chief of the New Generation (新生代) media organization that supported workers was also taken away by police in January. And just last week, his colleague Wei Zhili was picked up by police after visiting his parents in Guangzhou. Another New Generation editor, Ke Chengbing, has also disappeared and is believed to be in police custody.

A statement from the Hong Kong Confederation of Trade Unions, issued today and co-signed by 18 organizations and individuals, including China Labour Bulletin, calls not only for the release of all activists and an end to the suppression, but for the amendment of China’s labour laws so that they are in accordance with the basic principles of the International Labour Organization with regard to the freedom of association.