Employers need to abide by China’s labour laws and resolve labour disputes through negotiations with workers and the trade union as equal partners, the deputy head of Beijing’s No. 1 Intermediate Court, Sun Guoming, has stated.

Speaking at a press conference to discuss the labour dispute cases handled by the court since the implementation of the 2008 Labour Contract Law, Sun stressed that proper employment contracts that protect the rights and interests of employees should form the basis of labour relations and that employers should “open up channels for workers to voice their demands and grievances.”

The comments back-up CLB’s conclusion that the Labour Contract Law has largely failed to protect workers, and that the vast majority of labour disputes in China are simply the result of employers violating labour laws and regulations and refusing to negotiate or bargain with their employees.

Over the last eight years, the Beijing No. 1 Intermediate Court handled 21,598 labour dispute cases, an average of 2,699 cases per year. The vast majority of these cases (99.8 percent) were appeals from cases heard in Beijing’s district courts and took on average 53 days to resolve.

The intermediate court is usually the third stage in the labour dispute resolution process, following an arbitration hearing and district court proceedings. It is understandable therefore that court officials should feel frustrated at the high volume of cases still making it to their desks.

Official statistics show that the number of cases handled by local labour dispute arbitration committees (LDACs) has steadily increased since the introduction of the Labour Contract Law in January 2008. 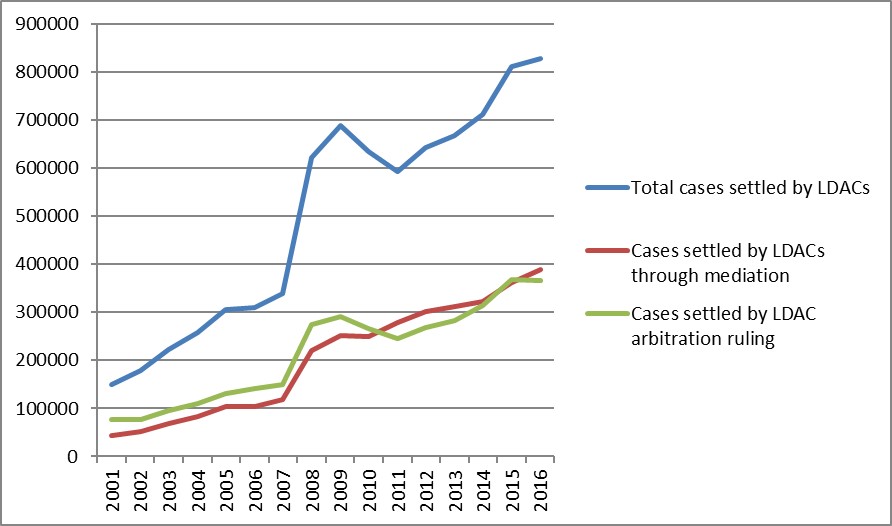 As Sun Guoming suggests, the best way to prevent and resolve labour disputes is firstly for employers to comply with the law and secondly for better communication between workers and management. In this regard, enterprise trade unions clearly have a crucial role to play in conveying workers’ demands to management and representing those workers in collective bargaining.