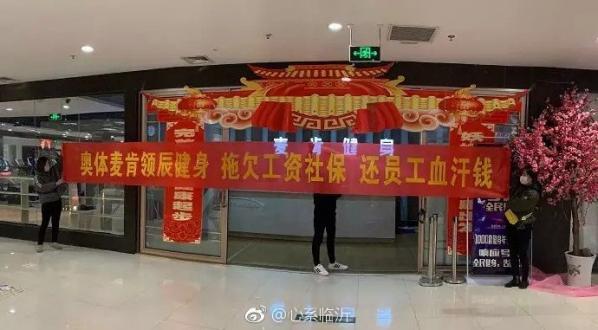 There has been a surge in the number of collective protests by employees at gyms and fitness centres in China this year. At least 40 protests, nearly all related to wage arrears following gym closures, have been recorded on China Labour Bulletin’s Strike Map so far this year, compared with 15 last year, and just one incident in the whole of 2015.

On 17 November this year, for example, a group of employees at Mango Fitness in the north-eastern city of Harbin were locked out. One worker told local media: “While some of our colleagues and some customers were still inside, a guy came along and used an iron chain to lock the door. Fortunately, the people inside got out by using the back door.”

It later transpired that the landlord had locked the venue because of long-standing rent arrears. Customers scrambled to get a refund and employees demanded payment of wages in arrears. However, local government officials said the owner of the company had vanished after previously assuring them that she had no plans to close the business.

The Harbin case was fairly typical of the growing number of business failures in the fitness industry that began last year with the closure of all Hosa Fitness Centres in Nanjing. More Hosa Fitness Centres in Beijing and Tianjin shut down in the following year, leading to heated protests by both customers and employees in those cities. Other companies soon followed.

Some analysts have argued that the failure of Hosa Fitness and other traditional gyms was simply a case of an outmoded business model being supplanted by a new more innovative and profitable model. Traditional fitness centres, it was said, relied on recruiting new members to expand their business. New members were offered large discounts if they paid for a year’s membership in advance. Those payments were then used to open new centres, employ new staff and recruit more members, and so on. However, this fast-growth model placed a huge strain on company finances and businesses often struggled to pay the rent and their employees.

However, the key issue here is not whether one business model is better than another, it is making sure that workers’ rights are protected when businesses fail. In nearly all cases where gyms closed down, employees were given no prior warning of the company’s financial troubles. Some workers even reported selling new memberships to customers the day before the company declared bankruptcy. The only confirmation of closure came when staff were actually locked out.

If local governments are unable to effectively regulate these businesses then it should be up to the local trade union to make sure that staff are properly protected. Thus far however, the union appears to be equally powerless.