On 15 June, the auto division of conglomerate Baoneng published on its Weibo social media account that it had received a 12 billion yuan investment from a state-owned enterprise. Soon after, China Labour Bulletin’s Strike Map recorded a wages in arrears case, capturing comments from Baoneng workers: “Where is our wage? Where is our social insurance? You’ve broken your promises!”

Though rarely discussed in English-language media, Baoneng is a sprawling organization with holdings ranging from finance, real estate, and healthcare to manufacturing and retail. It owns over 40 shopping centers and once employed over 150,000 workers. Now, like Evergrande, Baoneng’s debt problems have developed into a crisis that affects multiple sectors of China’s economy and the livelihoods of many workers.

The development of the Baoneng conglomerate

The potential for Baoneng’s rapid collapse is fitting for a company that had an equally rapid rise to power. Founded in 1992 by the Yao brothers, Baoneng began as a vegetable reseller that took advantage of agricultural policies to obtain land in Shenzhen’s lucrative property market. From there, Baoneng used strategies of debt leverage and corporate takeovers to continue its expansion, in 2003 acquiring Shenye Logistics Co. and in 2012 establishing Qianhai Life Insurance. 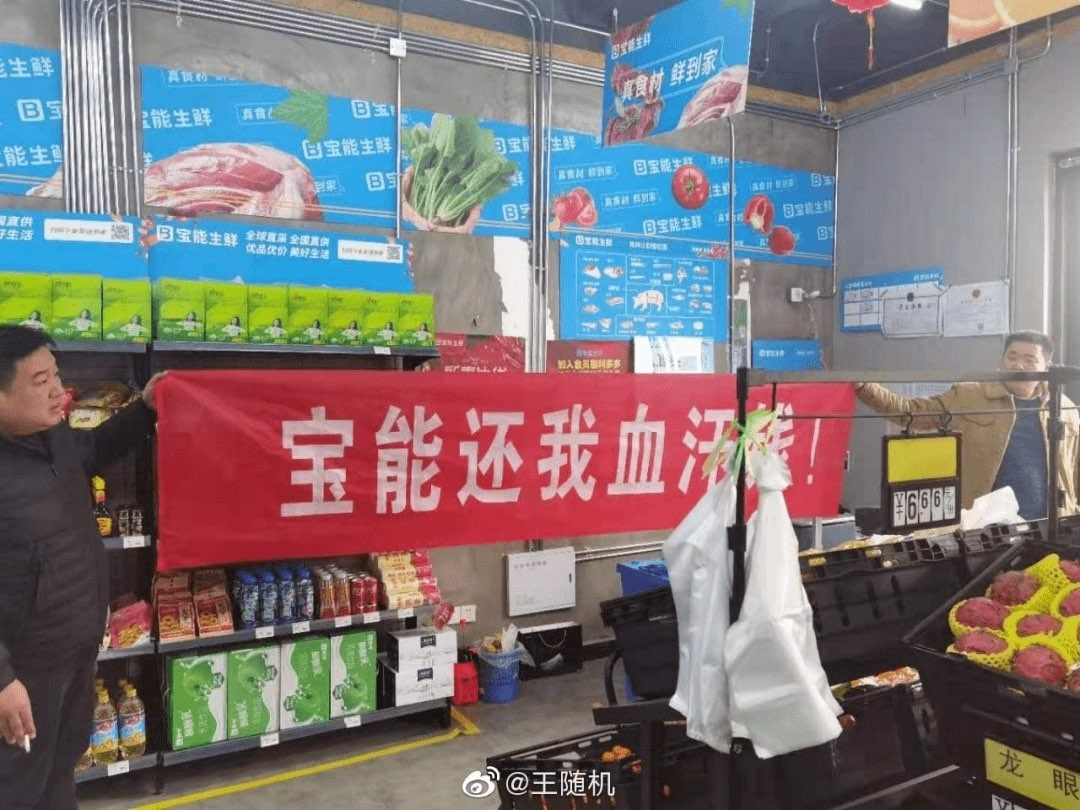 Baoneng’s trajectory was briefly interrupted in 2015 as a failed takeover bid of the Vanke corporation brought the attention of China’s regulators, forcing Baoneng to withdraw Qianhai Life from the insurance industry. Rather than being chastened by this scrutiny, Baoneng shifted from insurance to automobile manufacturing. In 2017 Baoneng acquired 51% of Qoros Automobile and in 2019 Changan PSA. Reporting on this expansion, the International Finance News called Baoneng’s eight billion yuan investment in these companies “money pits,” as Baoneng has spent fifty billion yuan over five years and only produced a single new model, the Qoros 7, which barely put a dent in the market. Investments like these, and a philosophy of reckless expansion over sound investments explain why Baoneng appears to be on the verge of collapse.

Baoneng’s automobile department was the first portion of the conglomerate to show signs of failure by refusing to pay workers wages and social insurance. According to leaks from the Qoros Research Institute, more than 800 employees are owed social security for eight months in 2020, as well as wages and social security through April and May 2021. Regarding these employees’ demands for wages and benefits, Qoros Auto Shanghai Branch did not provide any explanation to workers. Instead, it continued to ignore their demands, even going as far to refuse labour arbitration as a possible win-win compromise between labour and management.

Similarly, Baoneng’s Automobile’s Xi'an Research Institute and Factory has also experienced wage arrears and unresponsive management. Workers are owed back wages, social security has only been paid through May of 2021, and the pension funds of workers have only been paid up to February 2021. Like in Shanghai, Baoneng’s Xi’an management remains unresponsive to worker inquiries and refuses to allow for negotiation or labour arbitration. Baoneng employees said that in the face of the company’s financial problems, management has adopted a tactic of substantial layoffs: “You will be notified in the morning that you’ve been let go, so finish your work and leave by the afternoon.”

For these workers in Xi’an, Baoneng has not given any target date for when their wages will be paid. Workers have described their confusion: "(Baoneng) has employees completely clueless about when salaries will be paid, and if you speak up for yourself demanding clarification, they let you go." Jiemian News learned that the staff of Qoros Auto under Baoneng Motors has been reduced from about 2,000 in April to 800 at present.

Baoneng Group’s operations in other sectors - such as retail and supermarkets - have also experienced sweeping failures to pay wages. According to Baoneng’s online employment records (which have since been deleted) Baoneng Fresh, a grocery retailer, has more than 2,700 employees in 29 cities owed approximately 44 million yuan in wages. The last wage received by employees was in July 2021, for back wages in May.

The Baoneng employees across China who haven’t received their wages are waiting at home for work, enduring increasingly difficult economic conditions. On social media, feelings of depression and helplessness dominate conversations. Workers owed back wages stated in a now-deleted post that they are ”unable to repay loans, children cannot go to school, the parents who depend on them cannot see a doctor and they have reached the point where they cannot live."

Despite these desperate statements, Baoneng continues to ignore the situation and its responsibility to workers. So far, the only response has come from local labour and government administration. One example comes from Nanjing, where Baoneng employees reported the situation to their local district labour arbitration commission. Though the Nanjing Municipal Government investigated and actively helped the employees ask for wages, Baoneng headquarters still refused to cooperate.

Baoneng continues to sell its assets, and workers continue to go unpaid

Facing an unprecedented debt crisis, Baoneng has resorted to selling off both its assets and its shares to other companies and buyers. Current and laid-off employees are also caught up in the consequences of Baoneng’s debt. News and social media show that many current employees have only received 20% of their backpay, with social insurance and housing stipends remaining completely unpaid.

For workers who have been laid off or resigned, Baoneng has not been transparent about when termination agreements will be honored. Baoneng employees have pointed out that their contracts do not stipulate when back wages or benefits will be paid to workers who are laid off or asked to resign. Rather, their contracts only state, “The wages of current employees will be given priority, and the wages of laid-off employees will be paid the following month.”

Lu Xuequn, chairman of Baoneng’s enterprise labour union, is the deputy general manager of Baoneng Holding Group and the director of Baoneng Human Resources Center. In 2019, he proposed that Baoneng’s labour union should "serve and effectively protect (workers’) rights…, conscientiously protect the legal rights and interests of employees and serve the employees wholeheartedly." However, no records of salaried workers mention the involvement of unions helping Baoneng employees. According to the Shenzhen Special Zone News, Baoneng’s corporate union has only briefly commented on the current labour strife: “(Baoneng) employees are the core of productivity and development. We will try our best to make every employee feel cared for at Baoneng.”

For now, the organizations helping Baoneng have not been unions but local labour departments. For example, the Shenzhen Longhua District Human Resources Bureau intervened in a local wage arrears incident involving Baoneng’s Auto Technology Ltd. The labour bureau vowed to “follow up immediately and do a thorough investigation of job stabilization and control,” including contacting Baoneng personnel in charge of these issues.

After the intervention of Shenzhen Longhua District Human Resource Bureau, Baoneng Group settled the May wages of 6,000 employees in 18 companies in Shenzhen Baoneng Science and Technology Park in July.

It remains a mystery why Shenzhen’s trade unions are not assisting Baoneng’s workers. While we wait to see if trade unions will get involved in the Baoneng labour dispute, unions across China can learn from the proactive attitude of Shenzhen government departments in attempting to assist Baoneng’s workers in receiving back wages and fighting for their labour rights protected under China’s laws.