A fire swept through an illegally constructed garment factory and dormitory in the southern outskirts of Beijing early Monday morning, killing 18 people and injuring 23 others.

All of the dead are believed to be migrant workers, 13 of whom worked at the garment factory on the ground floor. About 70 people, mainly migrant workers and their families, lived in the four-storey building in Jiugong township, about 15 kilomtres south of the city centre.

The workshop was locked and there were metal bars on the windows making escape difficult. Moreover, fire engines attempting to get to the blaze were blocked in the narrow and cluttered alleyways of Nanxiaojie, a village whose population had mushroomed to 70,000 in recent years as local residents built hundreds of small workshops and dormitories to house migrant workers.

Many of these structures had shoddy wiring and initial reports said the cause of the fire was most likely an electrical short circuit.

The illegal structure that was razed during Monday’s fire, with a workshop on the ground floor and dormitories above, is typical not just of Beijing’s villages but of small-scale factory districts across China. The vast majority of such buildings are never inspected by the local government and have very lax safety standards. See photo below. 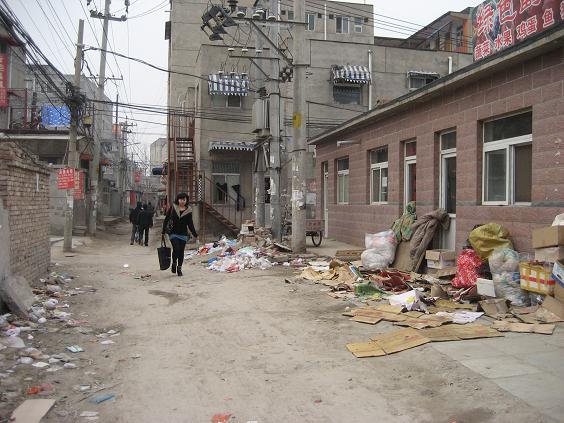 A street in Tangjialing village, north of Beijing, now being redeveloped into a hi-tech park.. CLB photo.

Monday’s fire echoes a tragedy 18 years ago when 84 people, mainly young migrant women workers, were killed at the Zhili Toy Factory in Shenzhen’s Longgang district. The incident sparked public outrage and led to the implementation of the Labour Law in 1994. At that time, the law was hailed by some commentators as a “protective amulet” that could prevent a reoccurrence of the Zhili tragedy. Clearly, that has not been the case. Many migrant workers are still forced to live in crowded firetraps above or adjacent to their workplace, with little protection from the local government officials who are supposed to be enforcing the law.

Indeed, just one day later on 26 April, eight workers died and another 17 were injured when an explosion destroyed a workers' dormitory in Pingdingshan, Henan.