More than 200 sanitation workers in Guangzhou’s University Town took to the streets on 26 August, (see photo below) demanding collective bargaining with their employer, a property services company, whose cleaning contract with the local government is due to expire at the end of the month. 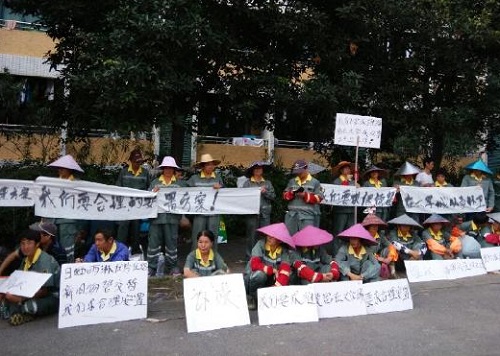 The company had not only tricked the workers into signing blank contracts, it had also refused to respond to workers’ demands for severance pay and guarantees of job security in the future. Many of the workers had been employed as cleaners in University Town, a complex of higher education institutes in Guangzhou’s Panyu District, for nearly a decade.

The workers did not have an enterprise union to represent them so on 23 August they democratically elected 18 of their own representatives, including three treasurers to watch over their collective campaign funds.

During the election process they got support and strategic advice from Yu Wucang, a veteran sanitation worker from another district of Guangzhou who understood the need for a system in which sanitation workers could represent themselves and defend their own interests regardless of who their employer was. Yu told the workers:

During the past 13 years, management in my area has changed hands seven times but the workers and their positions remain the same. This is a well-established practice and government approves of it because it enhances the workers sense of belonging and insures the quality of their work.

The local government is the beneficiary of our hard work and it is in their interest to stand with us when the employer changes. We love the expression Yu proposed: “Steel-forged workers and ever-changing companies.” This is our community, and we are here to stay.

In addition, the workers set up their own social media account and are updating news of their demands and actions, while the representatives are drafting a letter calling for support from the municipal trade union federation.

Meanwhile, students from Sun Yat-sen and Tsinghua Universities have launched an online petition to support the striking workers. "We share the same sky and breathe the same air as the sanitation workers and signing a letter is the least we can do," said Chen Weixiang from Sun Yat-sen University.