In China, there is no firefighters’ trade union and it shows

Five days after the massive explosions at a chemical storage warehouse in Tianjin that killed more than a hundred people, including at least 53 firefighters, the district trade union took decisive action: It printed and distributed 2,000 copies of a self-help handbook for workers affected by the tragedy. 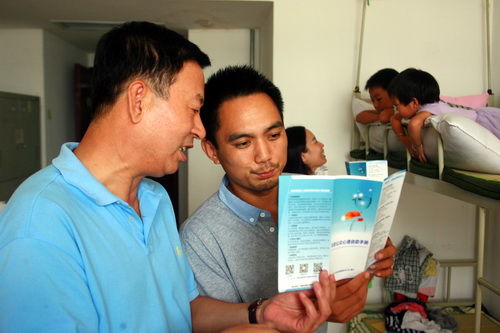 Zhang Jianqi, deputy head of the New Binhai District Trade Union hands out copies of its “Post-disaster self-help manual for the masses.” Photo from the union website.

This pathetic response sadly illustrates the inability of the official trade union in China to represent workers’ interests or even understand what a trade union should be doing.

There is no dedicated firefighters’ trade union in China: unions are organized predominately within enterprises and public institutions such as schools and hospitals. In this case the firefighters should have been represented by the state-owned Tianjin Port Group, to which many were contracted, and the New Binhai District Trade Union.

The lack of a trade union in China that is dedicated to the protection of firefighters has led to an under-staffed, poorly-trained and poorly paid workforce that has now suffered what is probably the worst tragedy in its history.

One of most glaring deficiencies exposed by the Tianjin disaster is that the majority of the firefighters involved were not even formally employed by the local government but were young, inexperienced short-term contract workers.

When China’s premier Li Keqiang was asked about this issue during a visit to the blast site in Tianjin, he tried to sidestep the question by saying “heroism does not depend on employment status.”

However, the problem of contract workers is a serious one that now, more than ever, needs to be addressed. The proportion of formally employed firefighters in China is less than 0.9 for every 10,000 citizens, far below the standards of other developing countries with an average of three firefighters per 10,000 and developed countries with five, according to one study published in China. The response of the authorities has been to make up the numbers with contract workers who are paid less and have fewer benefits than regular firefighters.

Family members of the Tianjin contract firefighters told the Chinese media that they were paid between 2,900-3,500 yuan per month. The minimum wage in Tianjin is 1,850 yuan per month. Firefighters did not receive the full social insurance coverage they were entitled to, and even had to pay their medical costs upfront in the event of injury and hope for reimbursement later.

In some other major cities, contract firefighters make even less, around 1,200 yuan a month (plus benefits) in Shanghai, or 1,630 per month in Taizhou, Jiangsu. In the American port city of Boston, by contrast, a firefighters’ starting salary is US$60,000 plus a wide range of benefits, more than three times the local minimum wage of around US$18,720.

Firefighters in China’s contract system have very little opportunity for promotion to higher-paid positions, and typically only serve for short, two-year terms on the job. All these factors combined with the intense military-style training, and frequent exposure to life and death situations, make dropout rates high among young cadets. In their desperation to retain trainees, many local authorities no longer let go of staff who fail their examinations but simply fine them instead.

Young, inexperienced contract workers are particularly vulnerable, especially if they are the first to respond to large, out of control fires. Just seven months before the Tianjin disaster, five firefighters were killed and 13 others were injured on 2 January 2015, while responding to a warehouse fire in the north-eastern city of Harbin.

The average age of the five Harbin firefighters who died was only about 20-years-old. Following the tragedy, a senior firefighter in Harbin said that young firefighters rarely get the proper experience before being dispatched to fires and often just burst on to the scene, spraying water at whatever they see.

There has been speculation that this is precisely what happened in Tianjin, an action that might well have caused the massive second explosion.

On the evening of 12 August, an 18 year old firefighter from Tianjin Port Authority Fire Team Five was having a relaxed conversation with his father before telling him he had to respond to a small fire at a warehouse. The conversion continued sporadically in his chat group until the thread abruptly ended. None of the 25 members of Fire Team Five (average age 20-years-old) would come back alive.