A total of 14 workers died and another 33 were injured when a four storey factory building in the eastern coastal city of Wenling, Zhejiang, suddenly collapsed on Saturday afternoon, 4 July 2015.

There were more than 50 people working in the shoe factory at the time of the collapse. Witnesses told the official Xinhua News Agency that there was loud bang and the entire fourth floor collapsed on to the second floor. 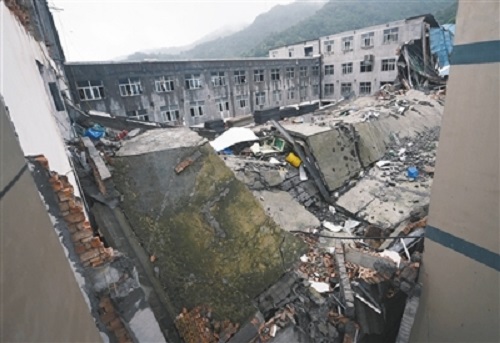 Wenling shoe factory, the day after the collapse. Photograph: Xinhua.

The cause of the collapse is still being investigated but several witnesses said there had been large pool, about one metre deep, containing fish on the top floor of the building, and that they had seen water leaking from the pool prior to the building collapse.

Shoddy construction and a fundamental disregard for workplace safety means that factory building collapses are not uncommon in China. In March this year, two workers died when another workshop in Zhejiang collapsed, and the following month, a lightning strike reportedly led to the collapse of a ceramics factory in neighbouring Fujian. On 4 June, a storm caused a hardware factory in Guangzhou to collapse, injuring six workers.

Explosions, fires, and gas and chemical leaks are also common occurrences in Chinese factories. In one of China’s worst ever industrial accidents, 146 people were killed in a massive explosion at Kunshan Zhongrong Metal Plating in August last year, and at least 17 workers were killed in an explosion that ripped through the Fuwa Machinery plant in Foshan on 31 December 2014.

Please see China Labour Bulletin’s Work Accident Map for an overview of the industrial accidents in China so far this year.