The chief suspect in the arson attack on a bus in the north-western city of Yinchuan on 5 January is reportedly a 34-year-old labour contractor named Ma Yongping who was owed 336,000 yuan for plumbing work completed by his labourers more two years ago.

The blaze, which occurred at just after seven in the morning on a packed commuter bus, killed 17 people and injured 32. Eight victims are said to be in a critical condition.

Ma was found seven hours later standing on the rooftop of a nearby building, threatening to jump. He subsequently surrendered to the police.

A news report from Sina.com that was subsequently deleted alleged that Ma had spent nearly three years trying to get paid for a job he and his workers had completed back in June 2013.

In early December last year, Ma poured gasoline over his clothes and climbed a signal tower where he stayed for more than ten hours. He was reportedly tricked into climbing down by police who promised that he would get paid. However, he was only paid 100,000 yuan and was subsequently locked up in a detention centre for ten days for disturbing public order. 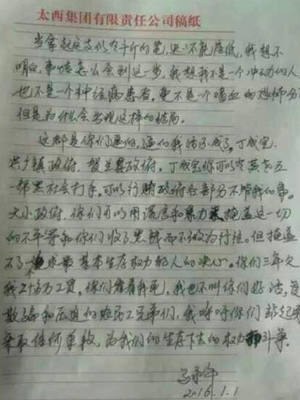 The deleted Sina.com report quoted a letter from Ma dated 1 January (see left) in which he accused the main project contractor of hiring thugs and colluding with local government officials in order to cover up his wrongdoing. Ma told the contractor:

“You still owe me more than 200,000 yuan in wages and leave me to die. I will not let you live peacefully. I call on all deceived and suppressed rural migrant workers to stand up and do whatever is necessary to fight for our livelihood.”

In his final letter dated 4 January, Ma said:  “I will pay for what I’ve done by burning in hell for 500 years and doing hard labour on earth for 500 years. But will the government and society start to think about the migrant workers who don’t get the wages they are owed?”

Ma’s arson attack was just the latest in series of desperate acts by migrant workers, and in particular labour contractors who are left in debt and unable to pay the labourers they had hired to work with them.

Early last year, CLB Director Han Dongfang talked to the families of two labour contractors who had killed themselves after being owed 150,000 yuan and several million yuan respectively for rural construction projects.

CLB’s Strike Map recorded 993 protests by construction workers last year, all but six of which were related to the non-payment of wages