“There is nothing to be afraid of. We shall see who wins in the end,” said a 25-year old striker at the gates of IBM ISTC in Shenzhen. “The company keeps bluffing about us violating company rules, but the staff at the local labour authority told us that a collective ‘work stoppage’ is in no way against the law in China.”

The strike by more than 1,000 workers at the IBM factory entered its ninth day Tuesday as staff continued in their now familiar 8:30am to 9:30pm routine – gathering in an organized formation and marching through the company compound, playing gongs and drums and chanting: “IBM is sweatshop, IBM show respect, IBM give me my youth back!” 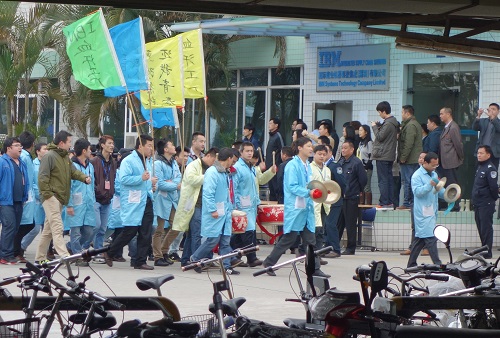 “The government officials are mediating with IBM now and all we need to do is continue the parade,” added the worker. “We don’t have to worry about being arrested, the police officers told us that they will leave us alone as long as we stay inside the company and don’t smash things.”

There was just one golf-cart-sized police patrol vehicle parked outside IBM yesterday and the police officers inside it were taking a nap.

During a break in the parade, IBM managers continued to urge the striking workers to go back to work, insisting that all wages and benefits would remain the same after the planned Lenovo takeover.

Lenovo, which announced on 23 January that it would acquire IBM’s industry-standard x86 server business in an agreement valued at US$2.3bn in cash and stock, issued a press release on 10 March which was then handed to the workers by IBM.

“IBM gave us this but no one gives a damn, we are employed by IBM now and we need an outright compensation plan from them,” another worker said.

“We heard about IBM’s ’Apollo Project’ and its global job cuts plan, and we know that by slashing 13,000 jobs, IBM will save US$ one billion,” said a 30-year-old striker who had  stepped out for a smoke.

“We have been sold, along with the whole deal, for US$2.3 billion. Someone is definitely making a ton of money, we need our share too!” he added.

Duan Yi, the veteran labour rights lawyer and head of the Laowei law firm in Shenzhen explained that:

Usually, three parties benefit financially from such a deal: the selling company, the buying company, and the middleman. In the West, it is commonplace for workers to ask for their share of the cake. It is now happening in China. What the workers demand is not guaranteed by law but neither is it prohibited by the law.

Workers are demanding that IBM to pay their average monthly salary during the past 12 month times their number of years of service, times two, plus one month’s salary, as well as extra compensation for pregnant women workers and nursing mothers.

“Now you can hear the company saying that ten workers have been sacked for not coming to work and staging strikes,” said a skilled employee.  “The company will definitely lose in court, we will continue the strike and we will get our share.”

Less than a mile away from the IBM factory are rows and rows of brand new housing, specifically built for low-income families. “After all this settles down, I will probably buy a house just like that,” said the skilled worker. “Everything I do is for a decent living for my family.”